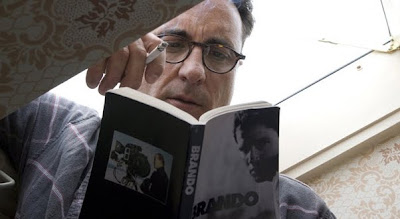 Vince Rizzo (Andy Garcia) is a corrections officer with secrets. The first one is that his lifelong dream is to become an actor. This ambition embarrasses him so much so that he lies to Joyce (Juliana Margulies), his wife, about taking an acting class in the evenings. On these nights he says he has a poker game. In Vince’s world gambling is more appropriate than acting. He has a normal life. He still lives in the house he grew up in on City Island, a small island off of the Bronx, with Joyce and their son, Vince Jr. (Ezra Miller), and has a daughter, Vivian (Dominik Garcia-Lorido, Garcia’s real-life daughter), in college in the city. Frivolous dreams, like acting, have no place in his life.


His second secret, his deepest, darkest secret, is that he has a clandestine son from a previous relationship. This fact is so hidden, forced down so deep, that even the son, Tony (Steven Strait), doesn’t know. Vince has never told anyone about this, and it only comes up when Tony shows up as a new prisoner in the prison where Vince works. Vince springs Tony from the joint and brings him home without telling anyone the truth. You can imagine how Joyce reacts to a random convict in her home.
“City Island” is all about secrets and lies and family. Some are relatively minor, like the fact that every member of the family smokes and hides it from the others. Vince has his secrets that lead Joyce to conclude that he is cheating on her. Vince Jr. has a secret fetish for big girls and frequents BBW porn sites. Vivian hides her expulsion from school, and that she works as a stripper.
While none of the lies are malicious, they coalesce into a messy complex of secrets that builds and builds until it is so big that it can’t be dismantled. The misunderstandings bred from this situation form the main narrative thrust of the film. The story is dark and twisted and farcical in the manner of the classic Greek comedies, developed by escalating confusion and faulty interpretations. Everything could be easily explained, so much drama could be avoided, but the characters are too far gone to take that route.
The ensemble cast is great, especially the dynamic between Garcia and Margulies. Their screaming, combative version of communication is hilarious, but at the same time adds a level of tension and emotion. Vince is a good twist on a typical Garcia character. He is a tough guy who works in a prison, but he has enough humanity and complexity to make him believable and engaging. I can’t help but think of a Wes Anderson movie populated by the real working class family of a prison guard and a secretary instead of caricatures of pretentious intellectuals.
The plot is complicated enough to set it apart from more run of the mill movies. One lie leads to another and another until everyone is hiding everything from everyone else. You keep watching because you want to see what happens when all of these secrets are finally exposed in the harsh light of day. In a general sense you know what will happen, but that doesn’t mean it’s predictable. For example, you know that Joyce will come to her breaking point and confront Vince about his perceived infidelities. But it is how the filmmakers handle that, what they do after with the confrontation, that differentiates “City Island”.
I didn’t expect to enjoy “City Island”. It looked like another cutesy, but ultimately mediocre, family comedy/drama. While it is a family comedy/drama, writer/director Raymond De Felitta has created something that is certainly not mediocre. He sets a scene where he lets the actors act together and films them, and the result is funny and warped and legitimately moving. There is a little Woody Allen, shades of Peter Sellers, and hints of Jacques Tati. You should watch it; it’s pretty damn good.
The DVD comes with an extra that features De Felitta and the cast sitting around a table, eating a meal, talking about the movie. It is simple and intimate, and from the chemistry between them, you understand why the movie works so well. There is a collection of deleted scenes that are mostly extended versions of scenes from the final version. Many of them are good, cut due to time constraints, not quality. One in particular that I like shows Vince on the street, getting ready for an audition. On the entertaining commentary track with De Felitta and Garcia, they talk about why it was cut, while it is a good moment on its own, editing it out increased the impact of Vince arriving at what turns out to be a cattle-call.
Posted by Brent McKnight at 3:01 PM