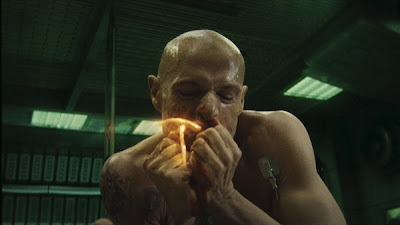 Orbiting high above the molten planet Dante, is the prison space station Dante 01. More than a simple prison, it is a psychiatric hospital for a handful the most violent offenders deep space has to offer. These prisoners are volunteers, they all would have been executed otherwise, and they participate in a range of psychiatric experiments, testing new procedures and protocols.


A shuttle arrives carrying Elisa (Linh Dan Pham), a young, ambitious new addition to the medical staff, and an unnamed man (Lambert Wilson), who was found floating alone in a blood-soaked ship. This is a departure from Wilson’s normal roles as a sophisticated playboy, and he barely speaks. He is taken into the prison, where the majority of the inmates are played by actors you’ll recognize from Caro’s films with Jeunet. Rasputin (Lotfi Yahya Jedidi) names the stranger, who doesn’t say a single for the first 42 minutes, Saint George, claiming he has come to “slay the dragon”. Cesar (Dominique Pinon) runs the show on the inside with his henchmen Lazarus (Francois Levantal) and Moloch (Francois Hadji-Lazaro), and doesn’t approve of the distraction caused by this new weirdo. I’m so used to seeing Pinon with his face squished into some wacky visage that I never realized how good an actor he is. He’s great as the convict leader, tough and full of pride, but at the same time flawed, human, and capable of change.
On the outside, where the doctors are equally as confined as their wards, Elisa begins to implement her new practices, backed by a corporate mandate from the parent company. She is interested in one thing above all else, seeing the practical applications of her theories and methods This lack of concern for the patients doesn’t sit well with Persephone (Simona Maicanescu).
The conflict inside escalates as it becomes clear that Saint George is a messianic figure with healing powers. At the same time the battle between the doctors also intensifies. Everyone has their own agendas and secrets, and as they began to spiral out of control, the space station and her inhabitants descend through the concentric circles of hell.
The “Inferno” thing gets heavy handed after a while. For Christ’s sake the two prison guards are named Cer and Berrus, so together they are the multi-headed hound of hell that guards Hades.
You always figured that Caro brought the dark side to his projects with Jeunet, like “Delicatessen” and “City of Lost Children”. But “Dante 01” dissolves any doubts once and for all. The film is dark and grim in every aspect, from lighting and set design to thematic concerns and performances. At times it is hallucinatory and disorienting, mirroring Saint George’s mental state. The film is full of pulsing camera work, and effects shots where you can see into characters, physically and metaphorically expressed in a visual.
The shoestring production manages to pull off over 300 effects shots, which all look wonderful. In the first shot the space station orbits around the lava planet Dante, and the shuttle docks. Such visuals give a grand scope to the story. Caro contrasts the vastness of space with the sardine can interior of the prison. The entire film is confined and expansive at the same time. The story is simple, strangers come into a new situation and create change, but it also tackles sprawling themes like religion, redemption, and sacrifice. And while the story takes place in the emptiness of space, it also compressed into the incredibly limited area of the prison.
The end gets too metaphysical and abstract too quickly. All of a sudden it tries to be “2001”, which is quite a leap. Out of nowhere the Christ metaphor gets cranked up a few notches (the space station is shaped like a cros). Not only does the movie jump in a thematic sense, but in a narrative sense as well. The visual elements here are some of the most compelling and eye catching of the movie, and they completely draw you in, it was hard to do anything but gawk, but even with that it still feels like there is a missing scene, like there is a reel lying on the ground somewhere.
“Dante 01” is a lot of things. It is a science fiction movie, a horror film, a Christ story, and a futuristic retelling of a classic myth, among others. Dark, gloomy, and atmospheric, it has a superb feel and aesthetic that is mostly equaled by the story.
Posted by Brent McKnight at 11:46 AM