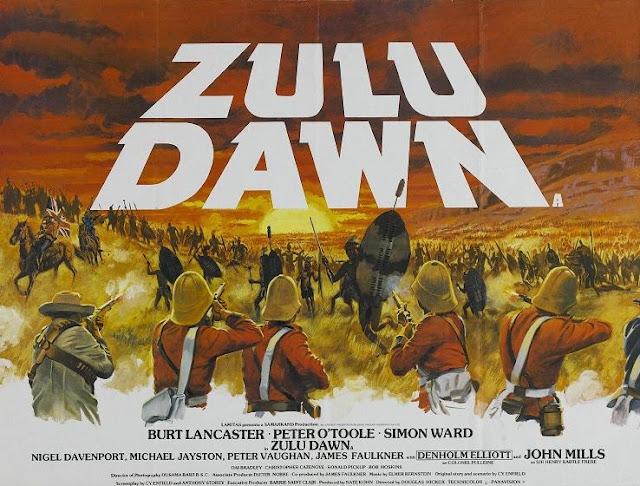 Watching “Zulu Dawn,” now out on Blu-ray, you get the distinct impression that this is a British version of frontier mythology. Instead of the wide, wild American west, you’re given Britain’s colonialism in Africa. Even the music feels like a sweeping western score. The 1979 prequel to “Zulu” rides the line between being a pure artifact of a bygone era—one that depicts a romanticized, unrealistic version of the time—and a modern, revisionist take that strives for a more accurate portrayal of historical reality.

The Zulu, though portrayed as fierce warriors, are not simply bloodthirsty savages bent on eradicating the noble white man. Granted, they’re not exactly well rounded, but they’re not presented as a monolithic evil, either. Their war is a defensive war, fought to preserve their way of life and culture. They aren’t given much to make them human on an individual level, but as a whole, they’re more treated more fairly than in many other, more exploitative films.

The theatrical release of “Zulu Dawn” clocks in at a standard 90 or so minutes, but the version Severin put on this new Blu-ray is a whopping 113 minutes, and feels every second of it. An overlong introduction sets up the personality of the British military in the late 1800s. A caste driven microcosm, you have your rank and file at the bottom. These are the men trying to climb the ladder, the middle class and poor kids with no other realistic prospects other than service. Above them hovers a layer of what is essentially middle management. While not the literal first line, these men are still at the front. Even though they’ve worked their way into a position of authority, they retain their blue-collar sensibilities. A lot of these men, like Bob Hoskins’ Colour Sergeant Williams, stop here, because to ascend, to become one of the commanding elite, you must be a gentleman, one of good birth, or at least good financial standing.

While this class divide is never broached head on in “Zulu Dawn,” the juxtaposition of how the officers live—all fresh uniforms and high class social affairs—versus the grueling, dirty existence of the foot soldiers, makes the discrepancy omnipresent. In one scene the officers sit down to meal in their mess tent, which has full tea service and fine silver. One excuses himself because he can’t in good conscience fill his belly while his men have to march of for hours until they’ll be fed. When he leaves his compatriots roundly mock him. One young officer is even warned not to learn anything from him. Overall, this is an army of silly hats, ridiculous facial hair, and absurd bureaucracy. In the midst of a losing battle, the Quartermaster is more concerned with tracking every last bullet than with providing the troops adequate ammunition.

The basic premise of “Zulu Dawn” is that after years of coexisting in relative peace, Britain decides that everyone needs to live under Her Majesty’s laws, and invade the Zulu Nation. Within the military ranks you have a cross section of stances on the matter. Some think a smooth, harmonious existence can continue, while others, including the cocky, arrogant Lord Chelmsford (Peter O’Toole, who looks like an angry chimpanzee), want to eradicate them from the face of the Earth. The phrase, “final solution,” is even invoked at one point. For some this is a fight for survival, for others a wonderful adventure, and still more view it as akin to a modern crusade. The latter group sees no possible downside, after all, what could possibly go wrong when you have Martini-Henry carbines and your inhuman enemy is armed only with spears?

A beautiful Blu-ray transfer, one that captures the sprawling expanse and stunning locales on the African plains, the pace and length of “Zulu Dawn” preclude it from being a movie that you want to watch. After the players are introduced, and the action set in motion, the bulk of the movie is an epic battle. We’re talking “Lord of the Rings” epic here. It just goes on and on, and on, and on. This is one of those situations where the combat all eventually blends together until it is a blur of spears and shields and monotonous gunfire. Interesting in a number of ways, “Zulu Dawn” isn’t the most exciting movie. Some of you might enjoy this trek into history, but though intriguing, you’ll probably want to sit this one out.

And like the movie, the Blu-ray comes with a ton of extras that are, on the surface, theoretical level, worth checking out, but in reality leave you cold. If you’re really into the Battle of Isandlwana, the historical event “Zulu Dawn” is based on, then you’re in for one hell of a treat. Of the four primary extras, three are features that dig into various elements of the battle. “History of the Zulu War” is exactly that, an in depth exploration of the conflict. You delve into the political climate of the time, the motivations on either side of the line, and the ultimate causes of the clash.

“Recreating the War” is ostensibly about how the filmmakers attempted accuracy in their recreation of the battle—which often involved more than1000 screen Zulus. But what it really gives you is a feel for the true scope and size of the actual battle. This is furthered in “A Visit to the Battlefield,” which, again, is just what the name implies. No one lost any sleep coming up with the titles of these extras. There are also twelve minutes of behind the scenes outtakes from “Zulu Dawn.” Most of the time is taken up with Bob Hoskins hollerin’, which is a pretty good time.
Posted by Brent McKnight at 4:34 PM