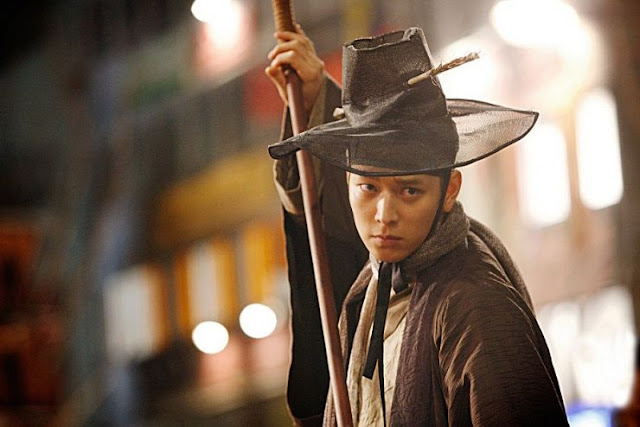 Based on popular Korean folk tales, 2009’s “Woochi: the Demon Slayer (AKA “Jean Woo-chi: The Taoist Wizard”) finally has a domestic Blu-ray release, courtesy of the fine folks at Shout! Factory. And who doesn’t want to sit in the comfort of their own home and watch giant rat monsters scurry up walls and do battle with a scatterbrained wizard and his sidekick that used to be a dog? If that doesn’t sound like a good time to you, then this probably isn’t the movie for you. However, if that sounds like a total blast, then by all means, give “Woochi: the Demon Slayer” a shot.


A sweeping fantasy that spans eons is a little out of line for director Choi Dong-hoon, who is most known crime films like “The Big Swindle” and “Tazza: The High Rollers.” But don’t worry, there’s still plenty of action to suck on in “Woochi,” with fights choreographed by Jung Doo-hong, who staged the combat in films like “G.I. Joe: Retaliation,” “The Good, The Bad, and The Weird,” and “A Bittersweet Life.”

Our wild tale begins in old timey times, in the Joseon era. You know what we’re talking about, when everything was dirty, feudal warlords ruled the countryside, and there were Tao masters, or wizards, everywhere, doing wizardy things. Undisciplined, careless, and frankly lazy, Jeon Woo-chi (Kang Dong-won) is the wizard equivalent of a slacker. Think that stoner kid who sat in the back of the class in high school and never took off his shades, and you’ve got a fair idea. He uses his magic to pester kings, extort goods and services, and hit on the ladies.

With the help of his sidekick, Chorangyi (Yu Hae-jin)—who is working his way up through the karmic ranks, from dog to horse to occasional human—the immortal Woo-chi is falsely accused of killing his master, and imprisoned in a scroll by a trio of comical immortal wizards. They have a very Three Stooges vibe. By the time 2009 rolls around, though, the world is in need of Woo-chi once more. Devious merchants rule the landscape, no one feeds other people anymore, and people just generally don’t very good care of one another. While never out front, the film is full of little class conflict nuggets like this. Woo-chi takes umbrage with the state of affairs. There are also a bunch of evil demon goblins on the loose, running amok, and causing chaos. He has to contend with that as well.

“Woochi: the Demon Slayer” is really a fish-out-of-water story. Woo-chi and Chorangyi, newly freed and clad in their traditional garb, form an interesting contrast to the glass and chrome skyscraper monstrosities of a modern urban setting.  They wander around, drinking it all in, accepting their new surroundings with relative ease. Everything is an interesting new development, and they updating their wardrobe a couple of times along the way. Though he’s cocky and self-assured, Woo-chi is the most reluctant of heroes, much more interested in exploring his new digs and chasing after the latest incarnation of the woman he loves, Seo In-kyung (Lim Soo-jun), than he is in saving the day or facing down his rival Hwadem (Kim Yoon-suk).

Full of big, bright fantasy action, cool special effects, and an air of madcap slapstick, “Woochi” is way, way too long. On the Blu-ray, the official run time is listed at 115 minutes, but when you pop the disc in your player, it comes up at two hours and 15 minutes. By my math, that equals 135 minutes. The opening and the set-up take up too much space, and by the time the action shifts to the streets of modern day Korea, you’re into a practically new movie. They have to pause to introduce a whole new set of characters and settings, and that takes even more time to introduce all of the new story elements.

This derails any momentum that the film had built up, and causes the pace to drag in the middle. Overall, the movie wanders around, mirroring its aimless protagonist. Like Woo-chi, the film is causal, laid back, feels no sense of urgency, and has no real direction. There’s no goal to work towards, little causality, and everything that happens just kind of happens. No big deal. The whole thing feels like the meandering story of a doddering old man. Pleasant enough, it never goes anywhere.

Still, “Woochi” has fun moments. Woo-chi and Chorangyi have comic back and forth, there are cute bits, and any day where you get to see giant bunny warriors is a pretty good day. If this is your thing, check it out. Not a bad movie, this could have been much more streamlined and focused. Trimming the fat would have helped the finished product.

Shout! Factory has put together a solid collection of extras for the Blu-ray release of “Woochi: the Demon Slayer.” You get brief introductions to all of the main characters, as the actors and director talk a bit about their backgrounds and preparation. A 25-minute long collection of video from the set gives you a behind the scenes glimpse at the production. As cool as this can be, the primary benefit is that you get to witness the staging of the fights and stunts. Other than that, this is just video with little to no context, and it gets old after a while.

More interesting that this feature, is the four-minute clip that shows the actors actually training to perform the various stunts, like learning how to leap from a tall building while wearing a wire rig, maintaining poses, and still acting. This is one of six production features that range from stunts and action, to special effects, lighting, and post-production work. There are also in depth interviews with key players in the film, including actors, directors, and producers. A collection of 13-minutes worth of deleted scenes rounds out bonus material. Most are unfinished—you can still see the wires—and though there are interesting scenes on their own, you understand while they were cut. Extended asides like Woo-chi pausing to teach a valuable life lesson to a stranger, in a movie that is already overlong, they were left out for good reason. 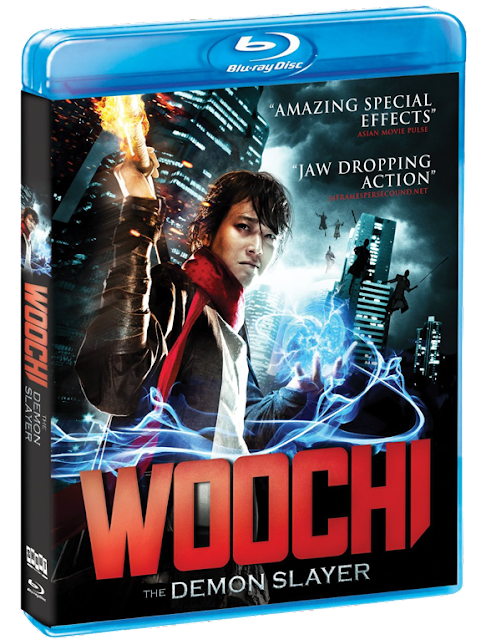 Posted by Brent McKnight at 7:35 PM