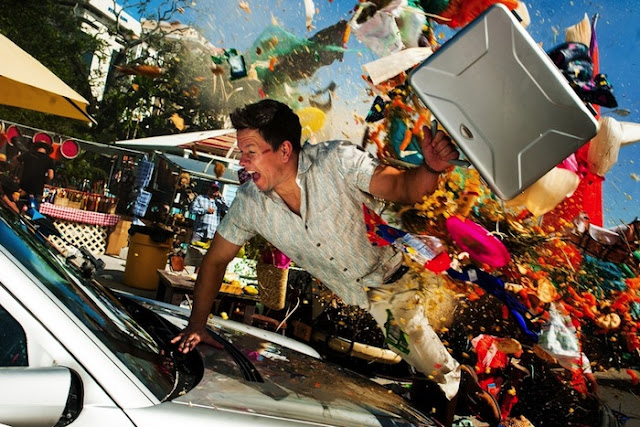 “Pain & Gain” is like watching a Day-Glo roid-rage explosion that will pump your pecks at the same time it shrivels your nards. This is what happens when you incorporate the phrases “Michael Bay” and “fact based” into the same movie. The film is a continual series of absurd events and poor decisions, each one more insane than the last. At one point the film pauses, and—over a freeze frame of a coked-out, jacked up Dwayne Johnson grilling human hands—it reminds you that this is still based on a true story. All I can say is that Bay’s reality must be a sight to behold. Oh to see the world through his gilded eyes.

Mind melting as it can be, “Pain & Gain” is comparatively low-key for Bay. Remember that we’re talking about a man who has spent the better part of a decade making movies about giant robots from space, so low-key is a relative term. In fact, the story sounds more like something you’d find in a Coen brothers movie, rather than typical Bay fare. A twisted, too-bizarre-to-be-made-up plot, violent black comedy, and attempts to pick apart the American Dream? From the guy who made “Bad Boys II?” Not necessarily what you would expect.

That isn’t to say that the movie is entirely successful. Scattered, way overlong—near the end the story veers away from the primary players, and you start to feel like two movies have been pressed together—and with low, often mean humor, “Pain & Gain” is a mess, but an entertaining mess. You get the distinct impression that screenwriters Christopher Markus and Stephen McFeely think nothing is funnier than jokes about fat women being hungry. All of this filters through Bay’s frenetic mish mash of lightning edits, attempts at cinema verite, molasses-paced slow motion—think Tony Shalhoub getting tazed in the face in ultra slo-mo—and his usual array of filters and stylistic gimmicks.

We begin in 1995 with body-builder-turned-dim-criminal-mastermind Daniel Lugo (Mark Wahlberg) cranking out sit-ups and hollering about getting jacked before he must flee the cops. Lugo is a man with powerful beliefs. He believes in fitness, working hard, and, above all, he believes in the American Dream. He just wants to be like everyone else. But for all his confidence, toil, and faith, he has exactly squat to show for it, besides a Fiero with threadbare Scooby-Doo seat covers.

After a particularly moving motivational speaker, Daniel decides that he’s a doer, not a don’ter. And what do doers do? They do. So he enlists the help of a couple gym buddies—Adrian Doorbal (Anthony Mackie), a burgeoning body builder whose steroid habit has left him with a flaccid, useless dong, and Paul Doyle (Johnson), a repentant, religious ex-con. Together they grab sleazy millionaire Victor Kershaw (Shalhoub) and take all his shit. Things, of course, don’t follow the preordained plan, and though they get a teasing taste of the good life, the trio topples headlong into a deep, dark rabbit hole of violence and depravity.

The performances are uniformly strong, the cast is great across the board, and there’s actual character development beyond broad types. Wahlberg’s Lugo calls to mind his Dirk Diggler from “Boogie Nights.” Dim, well meaning on the surface, and without a clue, he has an unshakable confidence in himself. When he looks at guys like Kershaw, he can’t help but wonder, why not me? And he’s able to motivate his friends to escalating feats of stupidity. Mackie, Shalhoub, and Ed Harris comport themselves admirably, as should be expected from actors of their caliber. Because this is a Michael Fucking Bay movie we’re talking about here, the supporting cast includes Rob Corddry, Ken Jeong, Rebel Wilson, and Peter Stormare as an erectile dysfunction specialist. And that hot mess can be exactly as much fun as it sounds.

Beyond everything else, however, “Pain & Gain” simply reaffirms my undying love for The Rock. Call him Dwayne Johnson all you want, he’ll always be The Rock to me. To watch him go from reluctant co-conspirator—which he pulls off with complete earnestness—to doing blow off a stripper’s ass and feeding his own severed toe to a Chihuahua, is the most entertaining character arc you’ll experience at the movies this year. He goes for broke with such abandon, with such endearing gusto, that it’s impossible not to get sucked in.

As fun as the movie can be, “Pain & Gain” is a jumbled mess. There’s so much narration—every major and semi-major character has multiple extended monologues—that you start to think you’re listening to a book-on-tape. And the damn thing just keeps going and going and going. This is the Energizer-freaking-Bunny of lunatic, half-assed crime films. Cut 20 or 30 minutes, streamline the story, and this could have been great. There’s no subtly or nuance to “Pain & Gain,” you’re never sure if the film is laughing with the idiots or at the idiots, and in the end this looks like one of those holiday chocolate samplers. Some pieces are divine, while others leave a terrible, lingering taste in your mouth.
Posted by Brent McKnight at 8:49 PM