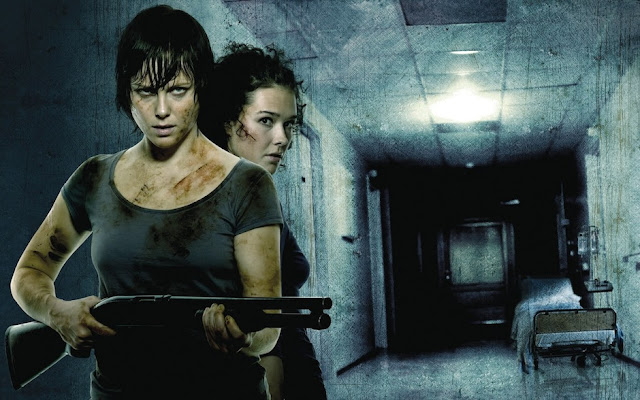 After battling a crazed backwoods hillbilly, or at least their Norwegian equivalent, and barely escaping with your life, most of us want to take a nice, long break. Maybe a relaxing vacation where we can sit back and get our nerves together before we have to go through it again. Unfortunately for Jannicke (Ingrid Bolso Berdal), she doesn’t have that option. As soon as her harrowing adventure ends in “Cold Prey,” it picks up right away in Mats Sternberg’s sequel, “Cold Prey 2,” now out on Blu-ray and DVD from the fine folks at Shout! Factory. No lie, they’ve been on something of a hot streak lately, which continues with this release. “Cold Prey 2” is nothing startling, but it’s a solid example of a slasher, one that stands along with the first film.

When Jannicke wanders out of the mountains, half frozen, covered in blood, clutching her trusty ice axe, and with a horrifying story to tell, the world of “Cold Prey” opens up, and spreads its horizons so to speak. We’re introduced to the staff of a hospital that is in the process of shutting down, and the members of a small town police force. While Jannicke recoups in the hospital, they set about treating her injuries, physical and mental, and confirming her account of violent murder in an abandoned mountain hotel.

Confronted with the aftermath of a heinous crime, not to mention a whole pile of corpses crammed into the crack of a glacier, the worst seems behind them. What remains to be done is mostly procedural, janitorial, and investigative in nature. That’s where everyone’s assumptions prove very, very wrong. When the remains of Jannicke’s friends, along with those of the ski-mask-wearing killer, are hauled into the hospital morgue for safe keeping, it turns out that the killer may not be quite as dead as you usually hope when talking about mass-murdering psychopaths.

“Cold Prey 2” is a long, slow build; you’re half way through by the time the blood really starts to flow. The movie takes its time setting the stage. You’re introduced to the characters, and, because you can’t have an unexplained killer on the loose for too many movies in a row, they even attempt to unveil the past of the shadowy villain. It’s never explicitly spelled out, but enough is hinted at and intimated that you get the picture.

You care about Camilla (Marta Snorresdotter Rovik), the young doctor, her hesitant cop boyfriend Ole (Kim Wafladt), and even Einar (Per Schaanning), the wise old sheriff. He’s the one who digs through the past to tie all of this back to a series of unexplained disappearances over the years, ones they’ve mistakenly attributed to the rugged mountain terrain. This emotional investment ups the stakes for you as a viewer, and the escalating tension, the feeling that something isn’t right, even before things start to go south, propels you through the film.

There are certainly lots of “I wouldn’t do that…” moments in “Cold Prey 2,” and avid horror fans aren’t going to find anything new here, but this is still an entertaining ride. Violent and bloody without being gratuitous, “Cold Prey 2” is a more than serviceable slasher. Though the directions the story goes won’t surprise you, the film manages to keep you on the edge of your seat and moves along at a nice clip.

The home release of “Cold Prey 2” doesn’t come with much in the way of bonus material. You get a stray trailer, and seven-and-a-half minutes of deleted scenes, most of which are already in the film in slightly altered states, and not particularly interesting. However, the extras aren’t the reason to pick this up. While you may not need to own a copy of “Cold Prey 2” for your very own, it’s definitely worth picking up as a rental on a cold, lonely night. You won’t have your mind blown, but you’ll be engaged for an hour-and-a-half.
Posted by Brent McKnight at 6:56 PM