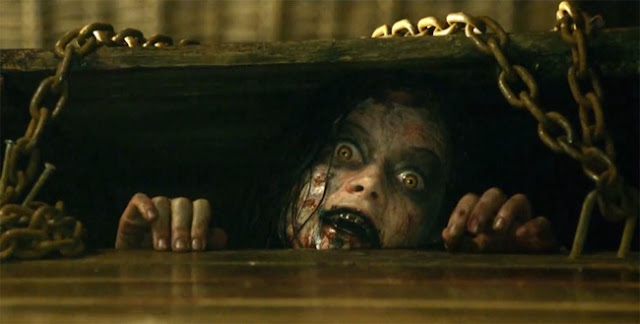 When we learned that there was going to be an “Evil Dead” remake, or reboot, or whatever it’s supposed to be, most of us groaned and chalked it up to another unnecessary rehash of a beloved movie from our past. While I still don’t see the need for the new “Evil Dead,” over the intervening months the production has done something none of us thought possible, they made their movie look really, really good. That was unexpected. Whether or not “Evil Dead” lives up to this newfound potential is another thing.


Well I’m glad to report back with good news. “Evil Dead” is, mostly, a damn fine time. I say mostly because there’s not an ounce of originality to the plot, and the characters are nonexistent, but boy do they go for it with gusto as far as gore and terror are concerned. We’re talking a brutal, vicious, nasty little piece of business here. Full of jump scares, escalating tension, and legitimately unsettling moments, director Fede Alvarez bludgeons you across the face with blood and gut as he does his best to ape Sam Raimi in tone and style. Without giving away too much, there are definitely scenes that evoke a visceral, stomach-churning response.

Alvarez’s “Evil Dead” inhabits an interesting zone where it stands at its own distinct entity, while at the same time fitting snuggly into the family. Visually, the film is full of those rapid push shots from the point of view of the unnamed evil, darting through the woods, as well as Raimi’s trademark snap zooms into extreme close ups. On the surface, the update is a more serious take on the material than its predecessors, but there’s a bleak, gallows humor, and as the movie progresses, the level of absurdity continually ramps up. Always brutal, you get to a point where the over the top splatter touches the camp appeal of the source material.

Most importantly, this feels like “Evil Dead.” Not exactly the same animal, a similar gritty, low-budget horror aesthetic infuses every scene. As a reworking—whether you believe the rumors that this film, and the proposed future installments, is going to tie into the original trilogy, or not—“Evil Dead” is a success. There are enough shots of chainsaws and Sam Raimi’s 1973 Oldsmobile Delta 88 here to make you think fondly of the originals, and even though it revisits familiar scenes and events, the film doesn’t feel wholly bound by the past. Ominous imagery, like a roomful of hanging cats, ups the ante, while still speaking to the films origins.

The story is old hat. Five estranged friends—Mia (Jane Levy), her brother David (Shiloh Fernandez), Eric (Lou Taylor Pucci), Olivia (Jessica Lucas), and Natalie (Elizabeth Blackmore)—adjourn to a ramshackle cabin in the woods. A reunion of sorts, the get together is to help the witchy Mia kick a nasty drug habit that has plagued her for years. There are secrets, histories, and hidden wounds, but all of those are largely secondary concerns designed to add a few light shades of personality to the stock horror types. This portion of the story is too long, and Mia’s addiction is set up as a metaphor for, well, something that never materializes. This is introduced, harped on for a time, and abandoned shortly thereafter.

In the midst of withdrawals, Mia is frantic, moody, distressed. At one point she paces endless circles in the yard in the middle of a torrential downpour. All of this is compounded when Eric stumbles across an evil book bound in human flesh and inked in blood, and awakes an unspeakable evil in the woods. By the time the twitchy, dark-haired girl vomits chunky blood all over her friend and proclaims, “You’re all going to die tonight,” it should be obvious that things will not be fine in the morning.

Let this be another in a long line of important life lessons we learn from horror: If you come across a book wrapped in barbed wire, leave it be. Certainly don’t cut the wire, pry it open, and start leafing through the bloodstained pages. And without a doubt, 100% no, don’t start reading random passages in a mysterious language that you don’t recognize. Don’t sound out words phonis style. No good will come from this. At the very best, you’ll be responsible for a malevolent, long-dormant spirit coming back to life and murdering your friends. Seriously, every broken down hovel deep in the hills should come with a public service announcement like this.

“Evil Dead” certainly doesn’t break any new ground, not even close. They’re working within an established framework here, to be sure, but it has everything you twisted little gore hounds could want out of a movie. Blood, guts, and the further you go, Alvarez finds new levels of hell to put his characters through, until he’s just being mean. You’ll yell and laugh and be disturbed, often at the same time.

In true horror form, the film just won’t stop. You get end after end after end, where you’re sure it’s over, only for one more to pop up, until it is literally raining blood. Even though you get where they’re coming from, this tack does eventually get exhausting, and you just want a conclusion, some finality. After a giddy, finger-tenting good time, you walk out of the theater on one of the few down beats.

Generic as hell from a story perspective, you could probably write a very in depth article horror’s treatment of women—the new interpretation of the tree rape scene is puzzling—and there isn’t much direction beyond tormenting the characters. Eric is continually pummeled by evil, in new and inventive ways, throughout the entire movie. Still, if you can look past some rather sizeable flaws, and despite ending on a downward slope, overall, “Evil Dead” is bloody damn fun. 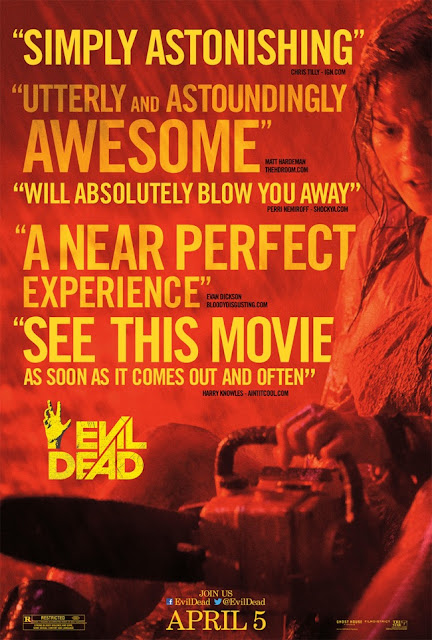