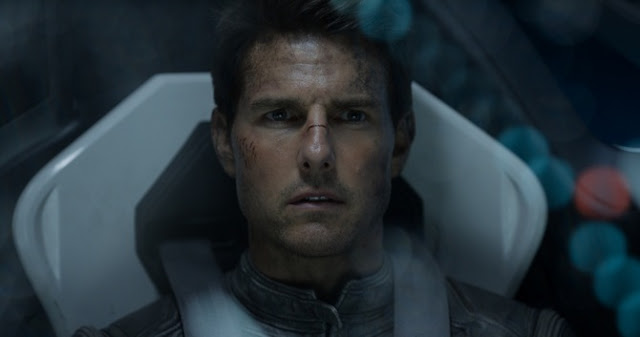 All style, no substance is the refrain that ran through my head watching writer/director Joseph Kosinski’s latest film, Oblivion. This is also the precise sentiment created by his previous film, Tron: Legacy. Though the Tom Cruise-starring science fiction adventure is breathtaking to look at, there is nothing to the film aside from the visuals. Bland, predictable, and frankly boring, Oblivion is an empty stylistic exercise, and feels like a slick bit of advertising, not a movie.

Filmed in IMAX with Sony’s new CineAlta F65 camera, Oblivion does look fantastic. Watching drone repairman Jack Harper (Cruise) blast through the wrecked-up wasteland of a post-alien invasion New York City on a futuristic dirt bike, past the strewn carcasses of container ships and submarines, is spectacular. Or when he floats through the ruined world in his bubble ship, the special effects are crisp and clean, and blend seamlessly with the frame. They’re so good you don’t notice them. But the entire film reminds you of those IMAX movies you saw as a kid, where a helicopter mounted camera sweeps around the rim of an active volcano, or dives into the Grand Canyon.

The biggest problem in Oblivion is that it has about as much story, character, and emotional involvement as those clinical, removed IMAX movies. Jack and his partner—in both a business and romantic sense—Victoria (Andrea Riseborough), are two of the last human beings on the planet. As Jack’s heavy-handed voice over tells you at the outset, and as the film explains in great detail again and again throughout, aliens called Scavs destroyed our moon, which threw the planet into geologic upheaval. When chaos was in full bloom, they invaded, and we were forced to use nukes to win the day. So we won the war, but the planet was ruined in the process, and the human race relocated to Jupiter’s moon of Titan.

All that remains are skeleton crews like Jack and Victoria, tasked with servicing the drones—which make sounds like a synthesizer farting—that protect the massive rigs that drain seawater to convert into power for the folks on Titan. The whole set up is an obvious attempt to make you consider our own dependence on finite natural resources like oil—the docks are set up to look like offshore oil drilling platforms—but other than a quick mention that the oceans are almost gone, the metaphor is roundly ignored.

Jack and Victoria are stock movie short timers. With just two weeks left before their mission is complete and the can move on to Titan, she just wants to keep her head down, do her job, swim naked with Jack, and abandon this place to memory. He, on the other hand, is wistful, questioning, and still feels that Earth, even after everything, is still his home. You’re supposed to feel his yearning when, standing in the middle of the ruins of a football stadium, he waxes poetic about a game he has never seen, but there is so little emotional connection that you can’t care. All the swelling music in the world can’t bind you to this cardboard cutout of a man.

Though they’ve both had their memories wiped as a convenient security measure, Jack still dreams of the Empire State Building—miraculously the only part of the NYC skyline still standing—and, more importantly, about a woman, Julia (Olga Kurylenko). The set up drags on and on, and though there is one notable action sequence in the early going, Oblivion plods forward until you’re left wondering what’s the damn point?

When the mystery woman finally crashes to Earth, in a pre-war pod no less, the carefully created façade of their lives unravels, and Jack discovers, surprise, maybe everything isn’t exactly like he’s been told. The plot is so transparent, so paint-by-numbers, that you know what comes next at every stage. You know who Julia really is, you know who is lying and who is telling the truth; you know when the terrible twist is coming, and instead of a mind-blowing wow moment, you’re left with a bad taste in your mouth. Instead of “holy shit,” you get “really?” You even see the way that the film is going to weasel its way into a bullshit happy ending, which leaves you making a face like something smells bad.

When you do get to the action sequences, which are woefully sparse, Kosinski has a good eye and moves the film along nicely, but the rest of the time you’re left holding an empty bag. The acting is flat and vapid. Kurylenko spends all of her screen time with a kicked puppy dog expression that makes her look like she thinks she’s about to be slapped. Cruise just looks confused for two hours, and Riseborough’s face is an expressionless blank. Melissa Leo’s southern drawl is an atrocious caricature, a deliberate one, but still obnoxious. Morgan Freeman and Nikolaj Coster-Waldau are completely squandered; they probably don’t have a dozen lines between them. And you can pilot Jack’s bubble ship through the gaping plot holes. You spend most of the movie asking, why did they…how did they… did they not see that coming?

Oblivion may be a masterwork on the visual side, but it is a complete void in every other arena. To paraphrase a friend, it’s too bad they didn’t cut one of the massive effects pieces and use that money to buy a story or some characters. You can spot obvious lifts from WALL-E, Planet of the Apes, The Matrix, RoboCop, Star Wars, and any number of other sci-fi movies, but even wearing your influences on your sleeve in such a manner can’t save a dreadfully dull movie. You want Oblivion to be more, but it has nothing else to offer, and at its worst, it’s tedious and difficult to sit through.