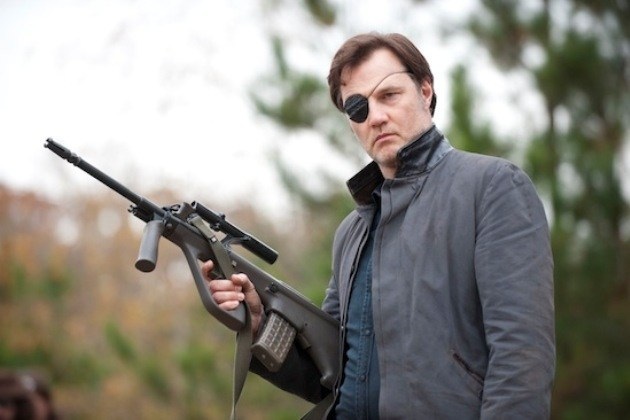 Season three of AMC’s hit zombie drama The Walking Dead has been a bumpy ride. It started off strong, introducing new characters, new arenas, pushing together groups of survivors, and generally establishing other humans as the most dangerous enemy of all. The first half of the season pushed the pace, the show was more consistent week to week, and things actually happened, which addressed one of the biggest complaints about the series: that you could skip an entire episode and not miss anything important. Up to the midway point, season three wasn’t great, but it was moving in the right direction, and things were looking up.

After returning from a mid-season hiatus, ugly old problems arose once again. The quality of episodes fluctuated wildly. “Clear” was a high point, not only for season three, but for The Walking Dead as a whole, and may go down the best episode since the pilot. But for every “Clear,” there are weeks like “Suicide King” and “Arrow on the Doorpost,” which are almost physically painful to watch and that left me yelling at my television like a crazy person. They’re filler, plain and simple. This season clocks in at 16 episodes, the most in the franchise thus far, and there are weeks where the struggle to fill that space is obvious.

So now, after a tumultuous journey, we’ve come to the end of the third season of The Walking Dead. Last week’s episode, “This Sorrowful Life,” didn’t move the plot as far forward as you expected going in, leaving a ton for the finale, “Welcome to the Tombs,” to tie up. With lots of work to do, and after and up-and-down season, does the conclusion deliver? Read on to find out.

Back in December, when it came out that showrunner Glen Mazzara had been run off of the production, that seemed like a bummer. After watching “Welcome to the Tombs,” written by Mazzara, I’m not so sure. Not the worst episode of season three, but the level of mediocrity would be impressive if it wasn’t so frustrating week after week.

Despite the fact that “Welcome to the Tombs” is blah, doesn’t wrap up much of anything, wanders all over the place, and is another in a string of disappointments, there is a faint glimmer of hope on the horizon. When you think back over the course of The Walking Dead, the few episodes that immediately spring to mind as being the best, as showing how good the show can be, are the pilot, “Days Gone By;” “Pretty Much Dead Already,” the season two mid-season finale; and “Clear” from a few weeks back.

The last two of these have something in common: future showrunner Scott M. Gimple wrote the script for both. These episodes are grim, focused, and, in the case of “Clear,” illustrate that you can have a tight, powerful episode without a ton of action or a slew of intertwining storylines muddling things up, and which are primarily composed of talking. In an ideal world, he’ll be able to steer the series towards more episodes like this, rather than the empty stuffing fans have been subjected to in the second half of season three.

Then again, Gimple also penned “18 Miles Out,” which is an annoying, tedious back-and-forth between Rick (Andrew Lincoln) and Shane (Jon Bernthal) about what to do with a prisoner. But I like what I he’s done this season. Just trying to find a silver lining here.

“Welcome to the Tombs” begins with promise. You start off with the Governor (David Morrissey) torturing Milton (Dallas Roberts), and finally becoming the totally evil villain you knew in your bones that you wanted to see. In this world it’s kill or die, and he’s planning on killing the holy hell out of everybody. First up is Milton, which we all saw coming from the moment the character was introduced. The Governor stabs him, and leaves him for dead so he’ll come back and devour Andrea (Laurie Holden), who is still chained up in the basement. We were promised that we would see 27 deaths—human deaths, not zombies—this week, so right out of the gate, this is a good start.

Over at the prison, the crew appears to be packing up to hit the road. Carl (Chandler Riggs) is not happy. Daryl (Norman Reedus) is coming to terms with the death of his brother Merle (Michael Rooker). Rick even takes a moment to say goodbye to Ghost Lori (Sarah Wayne Callies), and then have a heart-to-heart with Michonne (Danai Gurira). He apologizes for that whole almost handing her over to be tortured and murdered thing from last week. Apparently it’s water under the bridge, and things are cool between them.

In the meantime, Woodbury posses up—except for Tyreese (Chad L. Coleman) and Sasha (Sonequa Martin-Green), who insist this isn’t their fight. Fueled by the Governor’s rants and propaganda, everyone takes up arms and heads straight to the prison, where they blow up guard towers, shoot up the joint with a Hummer-mounted 50-cal, and just generally cause a ruckus. But something is off. No one fires back. When they pry open the gates, what do they find? A bunch of empty cells and a highlighted Bible quote about damnation.

This takes us to the 30-minute mark in the “Welcome to the Tombs,” and at this point you start to have worries. You can’t help but wonder if this is going to drag out into next year, into season four. That’s a disheartening prospect, the idea that they’re not done milking this situation for all its worth.

You keep waiting for the ambush, and waiting, and waiting. You know it has to be there somewhere. Despite appearances, Rick wouldn’t just walk away like this, that’s not in his character. Then just as you doubt it’s going to happen—flash grenades, body armor, shotguns, the full nine. The whole thing resembles an episode of The A-Team, where for all the bullets fired, no one seems to get shot. And the strategy works. The normally peaceful citizens of Woodbury freak out and retreat, a few drop along the way, but mostly they just get chased off.

While this is going on, Carl, Beth (Emily Kinney), and Hershel (Scott Wilson) hide out in the woods—to keep safe and because they’re useless. When a frightened kid from Woodbury stumbles upon them and attempts to surrender, Carl straight up murders him in cold blood. Just drops him. Okay, so Carl is becoming a sociopath. Good to know. More on that development later.

While running off their attackers seems, on the surface, like a victory, it doesn’t really accomplish a lot. Their enemies are still out there, angry and armed, and everyone is still in the same place they began. It’s like, even when things happen, somehow nothing really happens.

The Governor, frustrated by his people not being the murderous thugs he’s used to commanding, guns them all down, leaves them on the side of the road, and takes off with Martinez (Jose Pablo Cantillo) and Bowman (Travis Love). You never see them again, so who the hell knows where they went.

At the prison, the group tries to figure out what to do next, and Rick attempts to talk to his son about how you shouldn’t murder people. We all remember the first time we had that conversation with our parents. Awkward. Carl, however, has a different take. He says he was just doing what needed to be done, and cites how he could have killed the walker that bit Dale, how Rick didn’t kill the Governor when he had the chance, and similar instances where action could have saved lives. He basically calls his own father a pussy, and tells him to sack up and go take care of business.

Rick, Daryl, and Michonne decide to take the fight to Woodbury. The fact that there are only three of them feels like a disaster waiting to happen, but whatever. Along the way they pick up the lone survivor of the Governor’s rampage, realize who the real enemy is, and show up at the walls of the enclave in the middle of the night. They find Andrea, who has escaped her shackles, but been bitten by zombie Milton, and has to shoot herself in the head.

Maybe I’m an asshole, but I’ve been waiting for this moment since the season one. Out of all the changes the show has made in translating Robert Kirkman’s Walking Dead comics to the screen, the only serious issue I have is how they butchered Andrea’s personality. She’s such a great character, so strong and damaged, and is really the unsung hero of the series, saving the day countless times. But in the show she’s meddling, indecisive, thinks she knows better than everyone else, and has the ability to make me angry like few other characters I’ve ever encountered on TV. I wish Dale had let her blow up at the CDC.

With the exception of Andrea’s death, “Welcome to the Tombs” doesn’t actually tie up much of anything. Rick brings the rest of the survivors from Woodbury back to the prison—we could debate whether this is a better or worse decision than everyone moving there, but I don’t care—but they still haven’t done anything to secure the perimeter or fix the holes that allow walkers to randomly wander in. As a conclusion it falls flat and is so open ended that you feel like there should be another episode waiting next week.

Not to mention, the Governor, Martinez, and Bowman are still in the wind, so the same threat that has dogged them all season still looms over them. So moving into the fourth year, The Walking Dead is largely in the same place it has been. That’s a depressing thought.

I have a theory about season four. They’re obviously staying at the prison, and I suspect, especially since the group has increased its numbers, that the show may tackle some of the storylines from the comics that take place before they encounter the Governor. They’re actually at the prison for a while, long enough to settle in, spruce things up, and build a life, before they discover Woodbury.

There are some potential arcs I wouldn’t mind seeing on screen, but to be honest, I’m going to seriously consider whether or not to keep tuning in for season four. The show is exasperating, the quality is erratic, and so much of this season has been empty space that you can skip weeks and not miss a step. There has to be a reason to watch, and right now, I’m not sure there is.