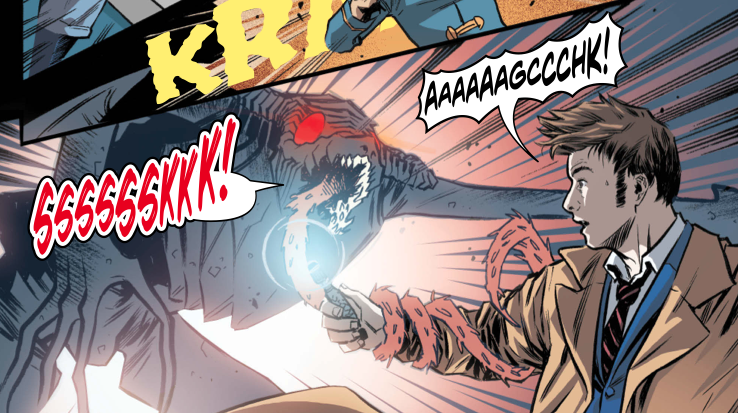 Doctor Who returned over the weekend with the first brand new episodes of a brand new season 8 with a brand new actor in the lead. Peter Capaldi’s 12th Time Lord is a definite, drastic change from the previous incarnations of the venerable character, but people seem to dig it. However, if you pine for an earlier time where the Doctor a little less dour and a little more lighthearted, not to mention a wee bit more relatable, then Titan Comics has just what you’re looking for with issue number 2 of their continuing Doctor Who: The Tenth Doctor comic.

If you read the first issue, you know that the story left us in quite a lurch, with a two-dimensional representation of David Tennant’s Doctor and tough, but under appreciated New Yorker Garbriella Gonzalez on a subway, facing off against a mysterious monster that looks a surprising amount like Gabby. This chapter picks up right where we left off last time, and while that comic was relatively light on the actual Doctor—choosing to focus more on Gabby, her family, and her personal troubles—these fresh pages more than make up for his absence.

Though the previous offering was primarily concerned a character that you can’t help but assume is going to be the Doctor’s travelling companion for the foreseeable future, this one throws her smack into the middle of some craziness. Like most of the Doctor’s companions, Gabby is taken aback by the whole situation, but not thrown to the point where she completely shuts down or loses it. That’s how you can tell you’ve got a keeper on your hands, if she can accept what she sees, and not only not freak, but dive right in, get her hands dirty, help smooth things out, and show she can handle herself. Being familiar with the previous adventures of the Doctor—why else would you have picked this up—you’re familiar with this process as we’ve seen it repeated a number of times.

And handle herself, Gabby does. Your average, run of the mill New York teenager, when confronted with demons from another dimension coming into our world through a series of washing machines at the local Laundromat, would likely crap themselves and leave a trail of it as they run screaming. But not Gabby. Though the events are indeed outside of the norm for her, when she encounters unseen, non-corporeal beings that either feed on positive emotions or negative ones—you can’t help but be a little bit reminded of the polymorph episodes of Red Dwarf—she’s not all that phased, which comes in handy in a hectic situation.

This issue picking up right where we left the other—you’re dropped into the very scene that you exited—drives home the point that this is a larger, continuing arc, and each new book isn’t even really an actual chapter. The biggest issue is that, thus far in the young title, the end points of each new comic come across as rather arbitrary, ending when they run out of pages, not necessarily at an ideal place to leave off for an extended amount of time before you get the next one.

Each issue isn’t even comparable to an episode, it’s more like each one is what happens between two commercial breaks. So far these comics have been a decent amount of fun, but you have to imagine that reading them collected in a single larger volume, where you have the opportunity to consume an entire story at once, is going to be a much more enjoyable way to approach this material. The way things are laid out now is frustrating. Right when you get into the narrative, right when you’re most identified with the characters, it’s time to leave. 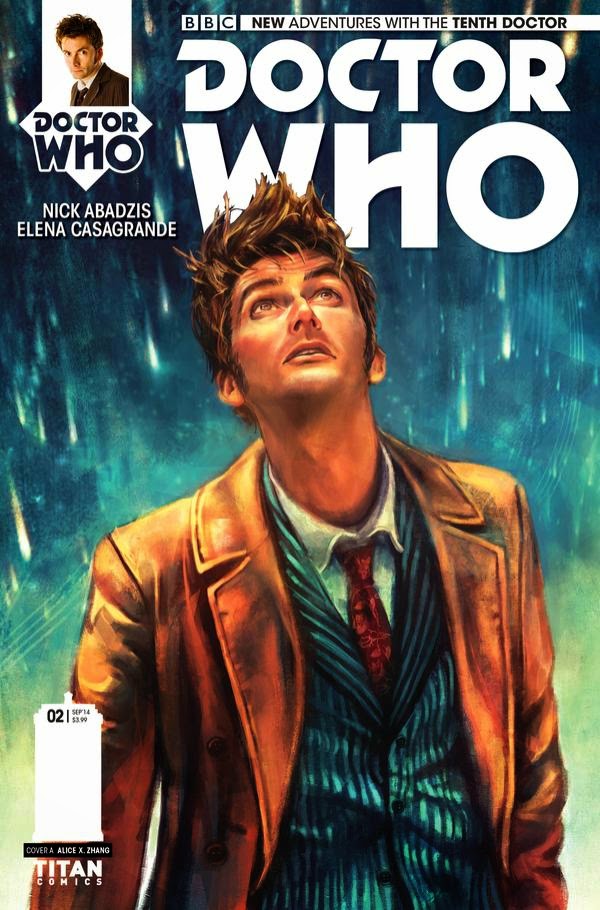 Posted by Brent McKnight at 3:16 PM