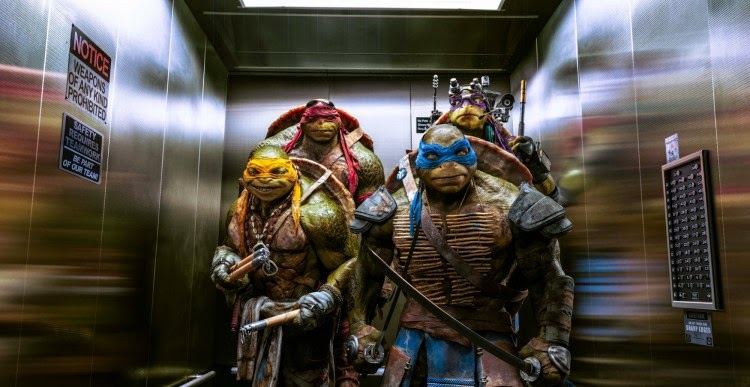 Jonathan Liebesman’s “Teenage Mutant Ninja Turtles” is not a good movie. That said, it’s may not necessarily be for the reasons that you think. So much has been of the drastic changes to the appearance of the Turtles, as well as the significant alterations to their origin story. In the grand scheme of the movie, however, these are relatively minor complaints. I really do dislike the way the Turtles look (don’t even get me started on how awful Splinter looks, it’s like they didn’t even bother to finish him), but in terms of character, the film actually does a decent job of capturing them.

As individuals, these are the Heroes in a Half Shell that I remember from my youth. They’re silly, irreverent, reckless, you know, teenagers. Michelangelo is the good-time guy, Raphael is brooding and angst filled, Donatello is the tech wiz, and Leonardo is the leader. One of the biggest problems is that there’s not nearly enough of them; you’re never given the chance to develop a legitimate emotional bond and the film relies too heavily on a preexisting familiarity. The script and story focuses so much on other elements that you barely spend any time with the Turtles, and every other element aside from them is terrible.

The only time the changes to the story are an issue is when the script tries to smash the original details together with the new stuff. It’s like the script goes out of its way to say, here are the things you remember about the Turtles, but here is what we’re doing now, over explaining at every juncture. If they had just gone ahead with the narrative, everything would have been better. At a basic level, the plot is the same—Shredder and the Foot Clan are terrorizing New York City, and only these mutant reptiles can stop them—but the way they get there is drastically different, like linking driven, dogged reporter April O’Neil (Megan Fox) to their beginnings. More than anyone, April is the main character.

And the script is so incredibly lazy. The first half of “TMNT” is little more than the most obvious exposition you can possibly imagine. It’s like an illustration of everything you’re taught not to do in regards to writing. Of course, the new antagonist, business mogul Eric Sacks (William Fichtner), is going to have a press conference where he delivers key pieces of the backstory for no reason to a room full of reporters he has no business telling any of this to. And in true Bond-villain form, at a pivotal moment he pauses to explain his plan in minute detail.

Everything that happens in “TMNT” is a total coincidence. All of the characters are, of course, connected, and this is the type of half-assed writing where if a character needs an item it’s right there next to them. Oh, you’re looking for car keys, they’re in the visor. You need to find something in a huge medical lab all you have to do is turn your head and exactly what you’re looking for is right there in arm’s reach. You need a button? It’s right there, labeled for your convenience.

I went into this movie with the mindset that they didn’t really make this for me. I’ve been a big Turtles fan since I was a kid, but produced by Nickelodeon, the intended audience is obvious, and it ain’t me. But during my screening, any time I had the thought, maybe it’s just me, all I had to do was turn to my right where a guy sat with his 10-year-old son. Especially during the first part, the kid was bored out of his mind, squirming, fidgeting, and at one point he even asked his dad when something was going to happen. And he wasn’t the only one. So it wasn’t just me. For large portions of the film, it fails to capture even it’s target audience. You can’t even justify this with the standard, “but it’s a kid’s movie,” because even kids know this is bad. And just because it’s aimed at kids, doesn’t mean it has to suck. “E.T.” was aimed at children, and that’s a pretty good movie.

And once you finally get into a more action heavy part of the movie, the action sucks. Liebesman is most known for directing the mythological “Wrath of the Titans” and the alien invasion “Battle: Los Angeles,” and these sequences are an absolute a mess. They’re a jumble of lightning fast edits, unnecessarily swooping camera moves, and hand held shaky cam. For example, during a key fight on a rooftop, the camera soars around the building, occasionally zooming for a quick kick-punch-kick before jerking back until the characters are so small you can hardly tell who is who. It’s super frustrating, you want to watch this fight, you want to see the Turtles in action, but the way Liebesman films the action makes it damn near impossible.

“TMNT” wants to be gritty and real—hence the pseudo verite camera work—but it also wants to be cartoonish and fun, and it never figures out how to strike a balance between those two sides. There’s a single scene where they finally pull this off, and Paramount gave it away by releasing it as a preview clip—it happens in an elevator is all I’ll say. It’s like they ignored everything anyone wants to see, like they said, “Instead of Turtles, lets’ give them a convoluted story and introduce a new villain that we won’t develop and completely ignore the bad guy everyone loves.”

While it can be fun to hang out with the title characters and listen to them banter, and even though I’m not a fan of the action, when it starts, at least it picks up the pace and moves you along. But there’s simply nothing to this movie. There’s no connection to “Teenage Mutant Ninja Turtles,” it’s completely empty on all fronts. It’s unfortunate, because the potential is there and you see it shine through from time to time, but this is a totally forgettable movie.

Posted by Brent McKnight at 9:30 PM