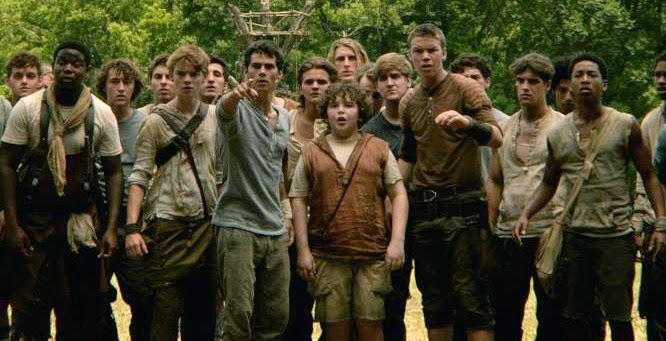 Reading James Dashner’s best-selling young adult novel The Maze Runner, I wasn’t particularly impressed. That said, this is one of those rare times when you read a book, and though you don’t think much of the work as it is, you think to yourself that this might make a decent movie. Sure, the writing may be lackluster—just because it’s for a younger audience doesn’t mean you should be able to get away with subpar writing, but that’s a discussion for another time and place—and the characters are so-so, but there a number of elements that could translate well from the page to the screen.

Structurally, the book is sound. From the get go, the pace is brisk, and there’s not a ton of down time to dwell on any issues. There’s a unique set up and hook, a constant earnest tension placed on the characters, and ample opportunities for big action set pieces that could very well work like gangbusters on the big screen. And did I mention there are big ass monsters with a sinister name? Because there are.

While there’s potential here for a good movie, the question remains, do first-time feature director Wes Ball and company capitalize on that? While this won’t necessarily blow you away or seem totally unfamiliar (especially if you’ve seen Cube), the answer is yes. The Maze Runner is a pleasing entry into the lucrative teen dystopia market that, while not quite as strong as The Hunger Games (especially Catching Fire), is a damn sight better than Divergent.

The premise is simple: a young man named Thomas (Dylan O’Brien) wakes up in a mysterious place called the Glade with no idea who he is, where he came from, or how he got there. Populated by other teen boys in a similar state, high walls enclose the Glade. They open every morning, revealing a sprawling, ever-changing maze, and close every night, but you don’t want to get stuck out there, because that’s a death sentence. Remember those monsters we talked about? They’re called Grievers, and they’re nasty buggers. Thomas’ arrival, though at first seeming pretty standard—a new boy shows up every month like clockwork—turns out to signify something new, a coming sea change. See, Thomas is different, he’s inquisitive, and he wants to find a way out ASAP.

There is a lot of exposition right away—Thomas shows up, gets a tour, and learns the lay of the land within the first few minutes, and it’s a testament to Ball that this never feels like a huge pile is being dumped on you, even though it is. Aligning you with Thomas from the very first shot, this information flows naturally—you learn as he learns, and lucky for you, he’s curious and wants to know everything about everything. 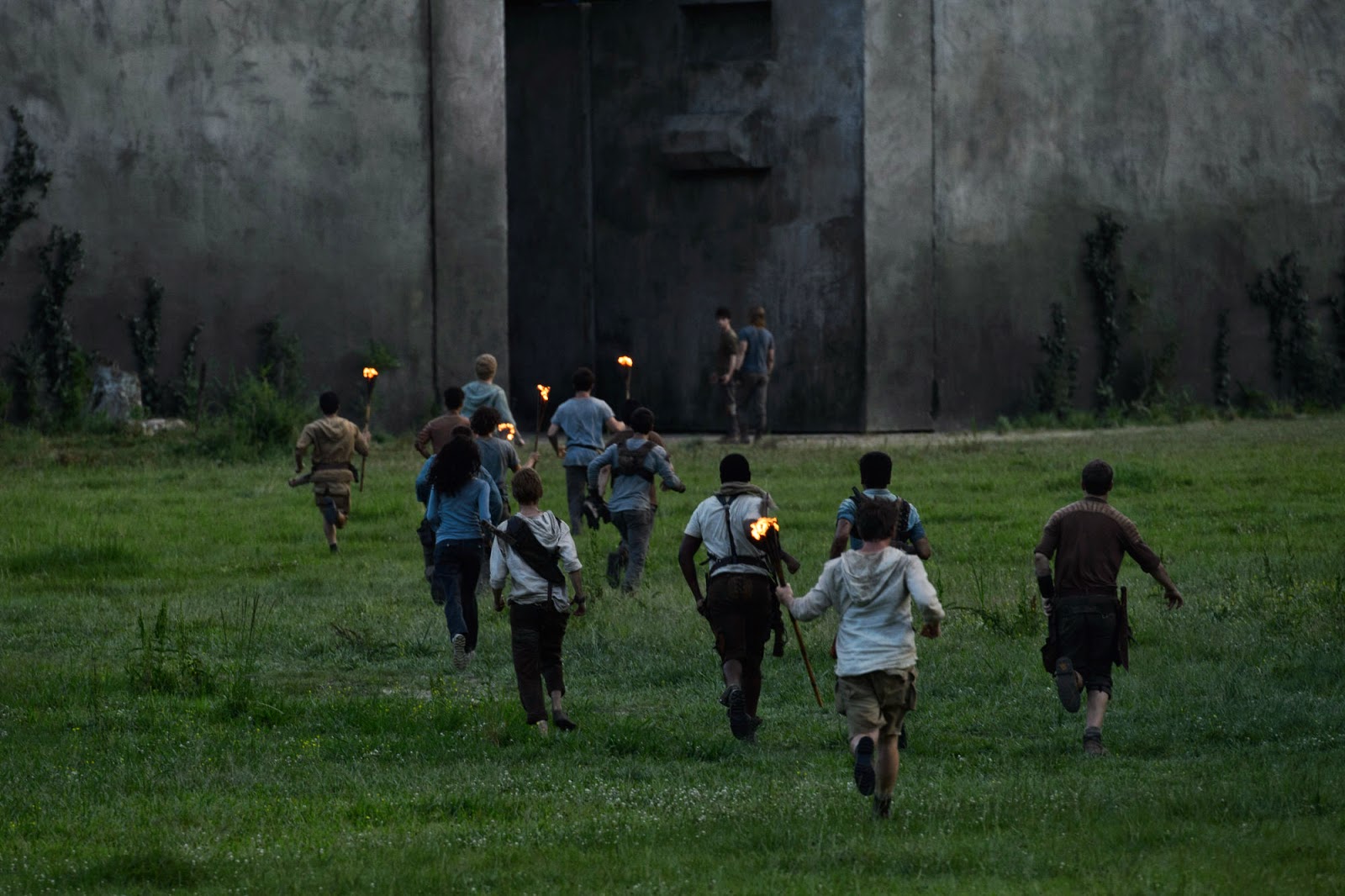 You may get recognizable elements from other YA adaptations, especially in a general aesthetic sense, but The Maze Runner owes a larger debt to classic literature. Though there are the rudiments of a dystopia, this is far more Lord of the Flies than it is Hunger Games (though Ball’s occasional use of a handheld camera definitely calls to mind the look of the first film in that particular franchise). The Gladers are a tribe stitched together by the most tenuous of rules, and even though things are pretty good when Thomas arrives, there is talk of “dark days” before, and you get the feeling that they’re never more than a step or two away from total feral chaos, and that inherent tension colors every interaction.

O’Brien, who plays a modern incarnation of Stiles on MTV’s Teen Wolf, does a nice job in the lead. He’s frazzled and shaken, as anyone would be in his situation, but he also brings a level of intensity and resolve to Thomas that drives him into the maze in search of an escape. He’s propped up by a colorful supporting cast including the head Glader, Alby (Aml Ameen), fast friend Newt (Thomas Brodie-Sangster), chubby young sidekick Chuck (Blake Cooper), and Gally (Will Poulter), who, from the first time you see him, you just know is going to be trouble. Gally borders on stock and cliché, but Poulter (who is incredible in Son of Rambow if you’ve never seen it) undercuts his hard edge with enough insecurity and anxiety that you understand it’s a lot of adolescent posturing built on top of a creaky foundation.

The maze itself is dangerous and mysterious, but still alluring and a draw, and a big part of this is how Ball films it. While the walls are massive, monolithic slabs of concrete, they’re old, weathered, covered in ivy, and almost look natural. As the doors, which themselves are framed as gaping maws, open and close each day, they emit a gust of wind, almost like they’re breathing, almost as if it’s alive. The Grievers share a similar place in the world, being part mechanical as well as part organic. Someone obviously created both, and the core of the mystery of The Maze Runner is who and why? Considering that this feels as big as anything out there, it’s extra impressive when you consider this spectacle level movie was all filmed on a $30 million production budget.

Tense from the first frame, shifts in the story serve to heighten that exponentially. Each act ratchets up the pressure, and while Thomas showing up signifies something big, that’s nothing compared to when the lone female presence, Teresa (Kaya Scodelario), shows up on the scene relatively late in the going. If Thomas is the gasoline, she’s the match. Unfortunately, she isn’t given much to do aside from being an inciting factor. Scodelario also has some issues with her accent that need working out before the next chapter hits, but the sheer fact that there’s zero romantic angle in this movie—there’s no time for romance here—let alone that she’s not at the center of some cloying love triangle like every other YA title, is a refreshing turn of events.

Ball has a knack for tone and pace, showing that the boys can have fun and moments of levity, but there’s a swift, brutal sense of frontier justice in effect, too. And though there is friendship and brotherhood, that can evaporate quickly when faced with disturbing outside forces and a gradually unspooling mystery. The tempo does sag a bit as the third act moves towards a climax, but there are enough harrowing action scenes thrown into the mix that you’re never down for long.

Fans of Dashner’s book will be pleased, as The Maze Runner is faithful to the source material, almost shockingly so at times. As with any adaptation, there are bound to be some tweaks and changes, but they’re relatively minor, and more than anything, the characters and overall feel of the novel are intact.

Of all the attempts to get in on this dystopian teen sci-fi market, The Maze Runner is definitely one of the better offerings. Is it going to dethrone The Hunger Games? No way in hell, but still, it’s smarter than most, thematically interesting, unique enough to make it stand out in a crowded landscape, and this is a franchise you won’t mind coming back to a few more times.

Posted by Brent McKnight at 7:09 AM