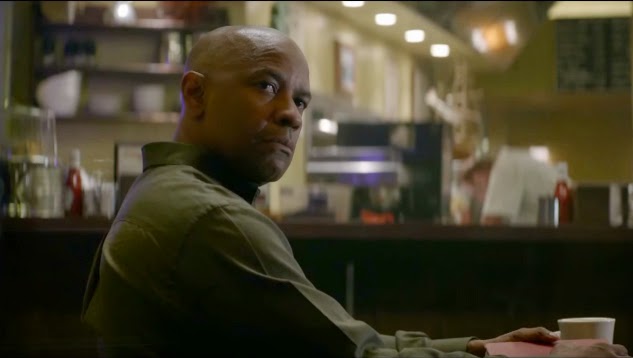 Antoine Fuqua’s adaptation of the beloved, at least by me, 1980s television series “The Equalizer” bears almost no resemblance to the show except for a loose set up and the name of the protagonist. It offers even less in the way of surprise, but that doesn’t stop it from being nuts and awesome. And as much as I enjoyed the show when I was a kid, if this was on my TV now, I would tune in to each and every damn episode. The film continually ramps ups to such lunatic heights that eventually the protagonist, in true action movie form, slowly walks away from a full-size tanker he just blew without even seeming to notice. Now walking away from an explosion is standard stuff—satirized as it is in every way imaginable, from spoofs to car commercials—but the way the film approaches this moment is indicative of the overall manic approach.

It’s in the details, and how the film takes things to previous unimagined heights of lunacy, where “The Equalizer” sets itself apart. Not only does Denzel Washington’s Robert McCall (a role taken over from the now deceased Edward Woodward) cause a single massive explosion, when the chain reaction of blasts triggered by that explosion almost engulfs him, he still doesn’t pick up the pace. From practically the first frame, you know this is going to end in a violent clash inside the Home Depot-esque hardware store where McCall works. Again, that’s to be expected. What you don’t see coming, however, is that the movie combines the showdown-in-a-place-with-lots-of-things-that-can-be-weapons trope with the slow-motion-rainstorm-showdown. I don’t want to say anymore about it, but if you’re asking yourself, aren’t they inside? The answer is yes, yes they are still inside of a building.

Also, one of the villains may be the Devil, so there’s that. We’ll get there eventually.

McCall lives a  bare, Spartan existence in a working class Boston neighborhood. He’s helpful and pleasant, teasing his young slacker coworkers that he used to be a Pip, as in one of Gladys Knight’s back up singers, helping a chubby clerk train to become a security guard, and is generally an all around good dude. Still, as friendly as he is, there’s a level of remove, of distance between himself and everyone else. No one really knows anything about him, he has OCD like tendencies, and something in his past haunts him to the point where he just never sleeps. Instead, he spends his nights at 24-hour coffee shop where he reads classic literature, organizes silverware, and banters with Elina (Chloe Grace Moretz), or Teri as she’s professionally known, a young prostitute who keeps similar hours and has dreams of becoming a singer.

Elina exists in the script as little more than an inciting incident (and disappears in short order, this isn’t a story of connection, this is a story of revenge and justice and setting things right), and when Robert sees her get beaten by her Russian pimp, he can no longer sit back and idly watch, his inner man of action takes over. First off, he murders an entire roomful of connected Russian gangsters without batting an eye or even pausing. And right out of the blue, “The Equalizer” shifts gears and becomes a violent, borderline gory film.

You don’t take out the East Coast hub of the Russian mob without someone noticing, and that’s where Martin Csokas’ Teddy comes in, sent by his bosses cut through the Boston underworld, leaving a swath of bodies behind him. On the surface he’s there to find answers, but he’s more delivering a message than anything else. Russian criminals tend to write their histories on their bodies in tattoos, like a resume, and Teddy, despite and oddly cuddly name, is no different. Through this imagery, devil horns, burning skulls, broken crosses, twisted religious symbolism etched into his skin, not to mention the extreme close ups and pseudo psychedelic way Fuqua shoots a shirtless Csokas, you have to ask yourself, wait, is he supposed to be the Devil?

It’s only one scene that introduces this idea, but once it’s on the table, it casts a different shadow over everything that comes afterwards. Though it fades into the background as you gain distance, it provides the story with a slight elevation in scope and scale, heightening the already present good versus evil dynamic, but giving it a near biblical feel for a moment, but just a moment.

One thing that’s easy to appreciate about “The Equalizer” is that, as opposed to most films in this general vicinity, it never explicitly spells out McCall’s background. He obviously comes from a military and intelligence background. After a throwaway appearance by Melissa Leo and Bill Pullman, you’re fairly certain it’s the CIA, but never 100 percent explicit—it’s possible he just had dealings with them and allies in the agency—but it doesn’t actually matter. To be honest, the most interesting part about his background isn’t the background—no matter what story they gave him, you would have heard it before—it’s what happens to him after he reverts back to his old way of life, a way of life he obviously took great pains to remove himself from. The deeper back in he gets, the less his compulsive behaviors surface.

Viewed through this filter, McCall’s story is a voyage of self-discovery, of a man returning to himself, allowing himself to be who he really, truly is. The violence comes so natural to him—you never see him train or maintain his skills like in other movies, but when he needs them, they’re back in the snap of your fingers—that it’s obviously always been there, hidden barely out of sight just below the surface. You come to understand that the only way he can control these tendencies is through constant vigilance, through the obsessive control of every exterior element of his life. His OCD isn’t a reaction to his past, it’s a regulatory mechanism. He can’t even allow himself the freedom to sleep because he’s afraid of what might happen when he relinquishes that the reins. However, after dismantling that first crew of Russians, which he knows can’t possibly be a one off, he sleeps like a damn baby, at a weird kind of peace.

For his part, Washington is in that full on badass mode he’s been in lately. There’s a lot of talk of Liam Neeson’s later career action renaissance, but with movies like “2 Guns,” “Safe House,” and even “Book of Eli” to an extent, a 59-year-old Denzel still kicks a healthy amount of ass. In “The Equalizer” he never tries to be intimidating, and even after you see firsthand what he’s capable of, you’re never frightened of him. He’s got a code, and if you’re not a piece of shit, if you’re not hurting innocent people, he has no beef with you.

What posturing he does, primarily with Teddy, isn’t so much about swagger and who has a bigger dick, it’s more you know who I am, you know what I’m capable of, so if you choose to engage me, you know what to expect. There’s a no nonsense, matter of fact air to Robert that sets him apart from other action leads. He doesn’t have anything to prove, there’s no chip on his shoulder, and in reality, it’s not even personal, he’s just standing up for the little guy, and there are many times when he’s downright charming about it.

“The Equalizer” is not a lightning fast actioner. This is a steady, gradual build that culminates in a tense, damn near dialogue free third act where the film feels like the time for words has come and gone and now is the time to get down to the serious business of fucking shit up.

Fuqua does his job along the way, though, keeping things interesting to look at. His camera is almost always moving, always in motion, panning, pulling, and, in rare cases, flipping you completely over a character’s head. This gets a bit tricky when you just want to show a close up of a man, alone, sitting in a coffee shop contemplating life, and this motion is so ubiquitous that it’s most noticeable in the rare instances where it’s absent, where the frame is finally static. Within this he adds stylized flourishes to the violent encounters. Watching McCall dismantle the room full of Russians in a flurry of near video game manic action is fun, but you start to worry that it’s all going to be like that. This trend actually abates as the movie progresses, thankfully, and settles down into a much more practical, vicious approach.

A lot of people are going to dismiss “The Equalizer” as just another action movie, and it’s not going to be for everyone, but there’s much more than that going on. It’s familiar to be sure, nothing the plot does will surprise you in any way, it’s like they cut and pasted the story from any of dozens of other movies you’ve seen before. But at the same time, while there’s nothing particularly interesting happening on a surface level, a subtext of strangeness runs below the action, and hanging over the top there’s such an insane, action genre one-upsmanship going on that it’s difficult not to be engage and even harder to look away.

Real Drama Fascinating to watch A repeat movie to see over again. 5 stars