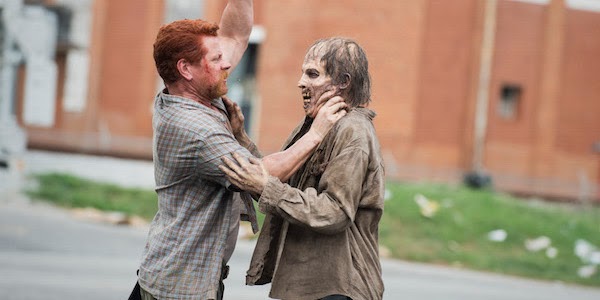 Last week’s episode of The Walking Dead, “Slabtown,” wasn’t great, and is the weakest episode of the series since the middle of season 4. But luckily, it was just a slight speed bump, as the hit zombie drama returned to its recent form with the fifth episode of season 5, “Self Help.” As the core group has broken up again, they’re sticking with the narrative structure where each episode follows one splinter, and this installment sheds some light on members of the cast who, though they’ve been present, haven’t had much to do.

Abraham (Michael Cudlitz), Rosita (Christian Serratos), and Eugene (Josh McDermitt) showed up on the scene in season 4, but aside from pushing the group forward, on to Washington DC, where Eugene says he can help cure the plague, they really haven’t become particularly important. We don’t know much about them, what they’ve been through, what drives them, or much besides their names. That all changes in “Self Help.” With Maggie (Lauren Cohan), Glenn (Steven Yeun), and Tara (Alanna Masterson) in tow, they left rest of the gang back at the church and are heading to the capital. To be honest, it’s nice to finally get some time with these three too, as they’ve also be shortchanged thus far in the season.

We may not know the newcomers very well, but what the hell, it turns out they have actual personalities. Right away, there are a few mullet jokes at Eugene’s expense, even a few of his own making (you’d think Abraham’s mustache or Rosita’s short shorts and pig tails might warrant a question or two, but no), and the romantic connection between Abraham and Rosita comes more to the forefront. But while all the surface action is going on—including a bus crash, hiding out in a really dark library, and commandeering a fire truck—there’s much more lurking below, and everyone is hiding things and keeping secrets that gradually leak out over the course of the episode.

During a string of brief flashbacks that thread through “Self Help” you’re offered quick glimpses into Abraham’s past, how he survived, and what he had to go through. You’re already well aware of his short temper, and his willingness to do whatever is necessary to survive, but you learn what that’s cost him, and that is everything. He had a family, a wife and two kids, and when they see what he’s capable of, truly, deep down, viscerally capable of, they want no part of him and run off into the night.

At the same time, Eugene has some skeletons in his own closet. It turns out, he’s the one who sabotaged the bus, and likes to watch Abraham and Rosita as they get down. As awkward, analytical, and cold as he comes off, there’s more to him that first meets the eye. When Maggie says she knows why he wears his hair like he does, because he’s not the person people think he is, she couldn’t be more right. Fans of the comics know what I’m talking about, but we’ll get to that later. 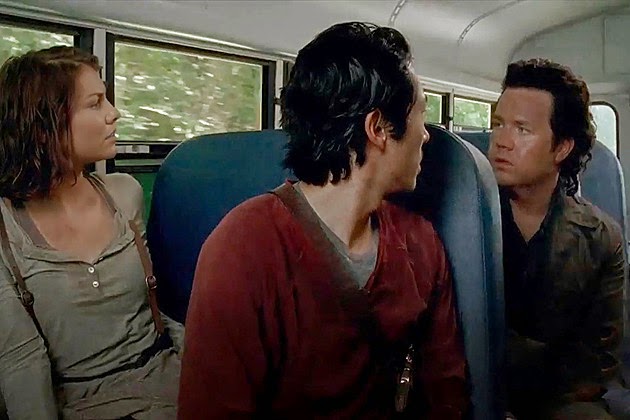 Glenn and Maggie have been largely relegated to background roles over the first part of season 5, but they have a few nice moments here, both with the larger group and also on their own. The deep connection they share comes across, and they, more than anyone else, are the seat where the real hope for the future sits. With a goal moving them forward, as Maggie says, it’s not about the past, it’s “all about what’s going to be.” Even as difficult at “Self Help” makes it to get away from what’s come before, or perhaps because of that, this fact has never been more important to The Walking Dead than now.

Maybe most impressive from a character perspective is that, for the first time ever, Tara is moderately interesting. I know, I know, I was as shocked as you. More than the others, she helps Eugene open up and emerge through the barriers he’s erected between himself and everyone else. And while it may be in the cursory stages at the moment, she forms a legitimate bond with the mullet wearing science man.

On the other end of the character spectrum, the biggest bummer is that Rosita is still the most underwritten character on the show. Unfortunately her presence does little more than add some sex appeal to the gore-soaked series. The show is making great strides developing the other female characters—Carol (Melissa McBride) has a conflicted badass thing going on, Michonne (Danai Gurira) is starting to grow and show legitimate emotion, and Beth (Emily Kinney) has become much more than just an annoying kid sister. It’d be nice to see Rosita get some substance, and maybe when they get further into her relationship with Abraham, and there will be plenty to explore in the aftermath of this episode, that could still happen. There’s one moment, when she confronts Abraham, hand on her holster, that’s quite nice—she doesn’t say a word, but there’s a lot going on—and is hopefully a sign of things to come. But for now, she’s just kind of there.

I know there was a spoiler warning right up front, but beyond this point, we’re going to get into the big daddy of spoilers for this episode, so I thought I’d toss up another one real quick. You’ve been warned. 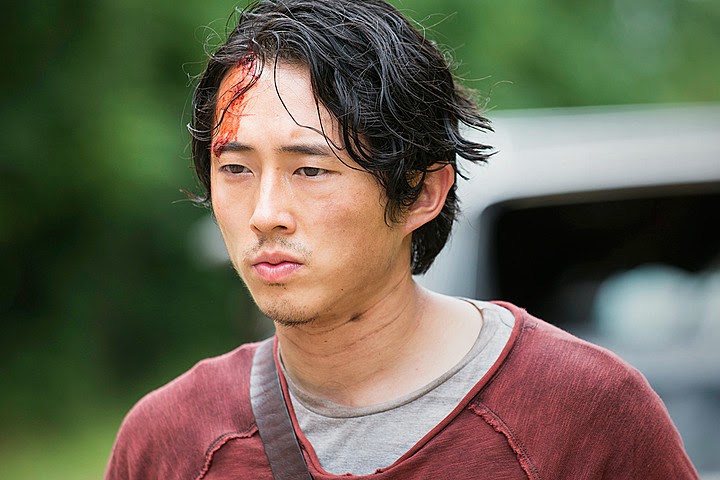 All of “Self Help” builds up to one big reveal. Those of you who’ve read the comics know what’s coming, but they still handle it in a way that has impact, even if you’re aware of it. Earlier I said Eugene is not who he people think he is, and he’s not. During a climactic moment, where tension is high and everyone is about to blow—Glenn and Abraham are damn near fisticuffs—Eugene unleashes his secret, and it’s a doozy.

Eugene is not a scientist and he has no idea how to stop the plague. By his calculations, DC is the safest place to be, and he has used and manipulated people all the way from Houston to Georgia, convincing people to take care of him, drag him along, protect him, and even lay down their lives in pursuit of a goal that’s not real.

This is, of course, a horrific shock to everyone, new and old alike, but for Abraham it’s especially crushing. In the wake of finding the zombie-eaten remains of his family, the only thing that kept him going on was protecting Eugene. It was a mission, a reason, it’s why he was so driven, why he couldn’t ever go back. Like a shark, he can’t stop moving, the weight of his loss will become too much to bear. The one thing he had to cling to is gone, and after maybe beating Eugene to death, you’re not sure, you question whether he’ll be able to continue.

A reveal like this is a lot to take in. Not only is it going to be interesting to see how, or even if, Abraham can come back, but it indelibly changes the arc of season 5. Getting to DC gave them a concrete goal, a specific target, and with that gone, you have to be curious to see what the survivors do now. If nothing else, this season of The Walking Dead has provided a lot to chew on, taken unexpected turns, and kept the stakes high.

And while the zombies have taken a backseat in season 5—their presence is always felt and the threat always looms, but they’re not as much in the forefront as previous years—the show has definitely done its best to make sure that the undead encounters are memorable and unique. There was that scene in the flooded basement a few episodes back, and the effects people had a field day with the scene in “Self Help” where Eugene unleashes a high-pressure fire hose on a swarm of rotting corpses. It’s gross and giddy, and should be more than enough to satisfy those of you more interested in the gore than the story.
Posted by Brent McKnight at 11:38 PM