'The Walking Dead' Season 5 Review: "Crossed" Sets Up Conflict In More Ways Than One 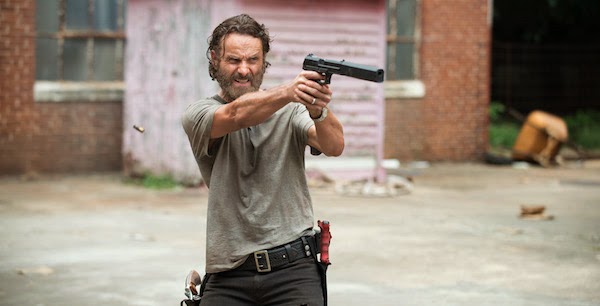 The Walking Dead is building towards something, something big. A major conflict has been brewing between the core group and the group at the hospital, and tonight’s episode, “Crossed,” the last one before the annual mid-season hiatus, pushes things even farther. It’s kind of all over the place, and there’s a lot going on, but it drives the arc of season 5 in a direction it needs to go.

Stop reading this if you haven’t watched “Crossed,” we’re going to get all kinds of spoilery from here on out.

“Crossed” is different from most of the previous episodes of season 5 in that it involves everyone, all of various sects that are scattered around the greater Georgia area. You have the church crew, Beth in the hospital, and Glenn, Maggie, and the others dealing with the Eugene fallout. And that’s the central theme of the episode, figuring out how to deal and move forward. Rick has a plan in mind for the folks at Grady Memorial, Abraham has to figure out what to do with his life now that Eugene’s revelation took away all meaning and direction, and Sasha has to come to terms with losing Bob, among others. None of this is going to be easy, none of it is going to be particularly pleasant, and they’re all going forward kicking and screaming.

As everyone struggles with their various issues and problems, including Father Gabriel who is up to something, Rick is stepping to the forefront again, maybe not in the best way. Thus far in season 5, he hasn’t been the center of things, as the show has focused in on developing other people. (Like did you know that Rosita has an actual spark of personality now, that’s awesome?) After Terminus he’s gotten grim, even by Walking Dead standards. Just look back to the massacre at the church. No matter how justified their actions may have been, how necessary, that was a straight up slaughter. In “Crossed,” his plan to go at the Dawn’s forces at the hospital involved sneaking in and slitting throats until they find Beth and Carol—Tyreese proposes an alternate option—and he’s about to shoot a dude in the face before Daryl steps in.

After kidnapping three cops to trade for their people, one of them, another Bob, asks Rick if he was a cop right out of the way. The former sheriff doesn’t answer, and though it could he his usual stoicism, you’re left to wonder if he even thinks of himself in that way anymore, or if he can. That part of his life may be so long gone it’s unrecognizable. It’s going to be interesting to see if he can reconcile that side of his personality with the demands of the new world, and if he’ll be able to emerge from this coming clash with any shred of humanity intact.

Rick’s struggle is indicative of the overall fight against crushing hopelessness for the group, and he’s certainly not the only one feeling the mounting pressure. Maggie, who gets super badass pulling a gun on Abraham when he gets out of control, almost breaks down, lamenting that it’s never going to get any better. And Carl, back at the church, has his own bleak outlook on the world, stating that they can’t stay in any one place anymore, and that there are things out there that you can’t hide from. They’re standing on the brink of a dark path they may not be able to recover from.

On the other hand, as a counter to these desolate possibilities, Glenn, Rosita, and Tara are able to find a sliver of something that almost resembles happiness as they catch fish and filter water. Just the fact that Tara gets a little bit of joy, however surface and fleeting, in a stupid joke and a yo-yo, illustrates that there is still hope out there to be had. That’s basically been Glenn’s major function this season. And again, in the coming episode, it’s going to be interesting to see how that holds up.

As “Crossed” starts to wrap up, you begin to feel the calm before the storm. Abraham has a breakthrough. It may be as simple as reaching out to take a sip of water, but from his perspective, it’s huge. Sasha has what, at least at first, seems to be a moment of profound human connection with one of their prisoners, and she starts coping with her loss and pain.

There are sparks of hope and optimism, and, like a dick, The Walking Dead pulls that chair out from underneath you right as you sit down. It gives you enough, barely, to let you think that maybe, just maybe things will work out, that everyone will walk away from this alive and unscathed. But that’s not the way this show works, you know that very well by now, and in the last moment the show reminds you that this is going to be big and violent and messy as hell. Rick and Dawn and the two sides are on a collision course, and there’s nothing to be done. It’s hard not to be cynical.
Posted by Brent McKnight at 11:05 PM