'The Hunger Games: Mockingjay-Part1' Movie Review: All Smoke, No Fire 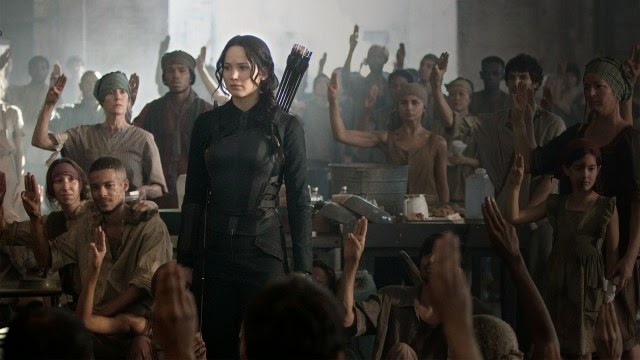 There are parts of The Hunger Games: Mockingjay—Part 1 that are harrowing, moving, and action-packed. While that can be fun to watch, and there are some nice bits of spectacle level eye candy, including the destruction of a massive damn, the problem is that the film never becomes more than simply the first part in a larger saga. This makes sense, obviously, as the third book in Suzanne Collins’ dystopian young adult trilogy has been split into two movies, but in this case, the film is all build up and feels like it’s just killing time before getting to the meaty part of the story.

If it sounds like I didn’t enjoy Mockingjay, that’s not true, it’s an entertaining enough way to spend a couple of hours, and there is enough going on to keep you occupied. This simply feels more like a chapter than a complete work. Again, that’s because it is, but it also skips over a number of elements in short order, and cuts off just when you’re most engaged and invested.

Picking up in the wake of the last installment, Catching Fire, you find Katniss Everdeen (Jennifer Lawrence) in District 13, which was believed by most to have been destroyed years ago, in the civil war that led to the creation of the Games in the first place. This is one piece that’s given almost no time in the story. Their continued survival underground for, at this point, more than 75 years, is explained with a couple of throwaway lines about being bombed, but pulling through because they’re military.

When we first see her, Katniss is obviously having some issues, which you realize because she’s hiding in the corner of a dark tunnel, shaking, muttering to herself, and on the edge of a breakdown. She’s in a delicate, damaged state, battling PTSD and survivors guilt, among other problems. The extent of her issues fluctuates throughout as she learns about her surroundings and throws her weight behind the burgeoning rebellion she helped spark in the other Districts, reluctantly agreeing to become the face of the revolution by appearing in a series of propaganda ads.

Mockingjay is much darker than the previous installments, which is saying something for a franchise based on kids killing each other for popular entertainment. You have to be happy that there are no actual Games in this chapter of The Hunger Games, a third time in the arena would be needlessly repetitive. Katniss has to find a way to cope with the compounded trauma she suffered in the previous films, in addition to dealing with being the hope of an entire nation. That’s a tall task for anyone, let alone a young woman still nursing fresh wounds.

That’s where Mockingjay has the most substance, and the drab, windowless, gloomy underground environment only heightens the pressure on the heroine. It’s an oppressive environment in more ways than one, though the dubious nature of the leaders of District 13, President Alma Coin (Julianne Moore) and Plutarch Heavensbee (Philip Seymour Hoffman), has been tamped down from the book. They certainly want to use her as a publicity tool, but in Collins’ book they’re much more callous about putting her in harms way (you can’t be a martyr if your still alive). The idea of whether or not she can trust the people she’s working with is tapped a few times, but never in much depth. This is one element I hope they explore further in the next film. 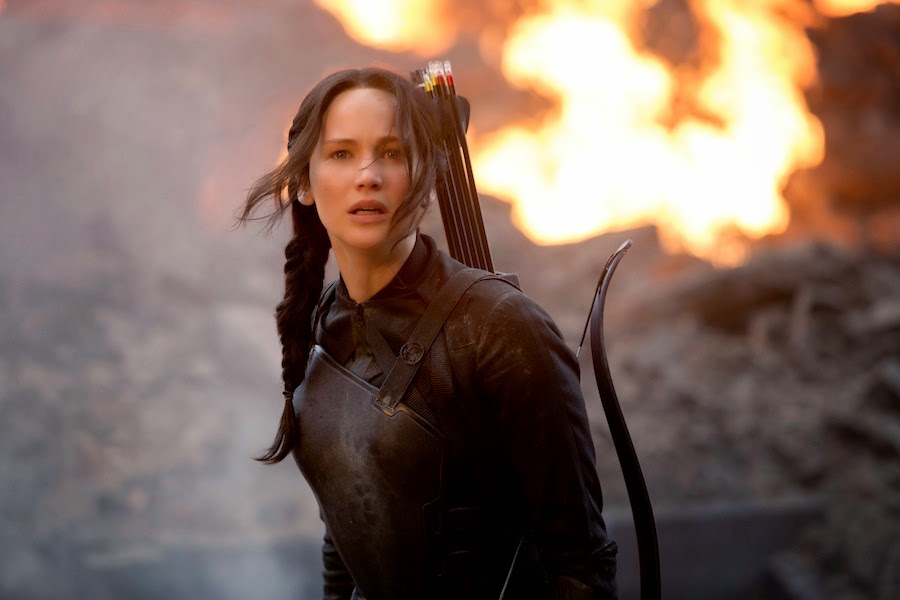 Juxtaposed against the claustrophobic confines are beautiful exterior nature shots that are as much a breath of fresh air to you the viewer as to the characters. Sitting along the edges of a quarry near the ruins of her home in District 12, Katniss sings a bluesy song—which makes sense given that 12, the mining region, is in West Virginia—that’s heartbreaking, just a damn gut punch.

It’s really Lawrence’s performance that adds the most weight to Mockingjay. Katniss is simultaneously bigger than life, her image blasted across a giant screen giving emphatic speeches, but she’s also banged up and bruised and very human. There are good reasons why these movies are so massively popular, and in large part it’s because of her. She’s a young woman trying to find her way in the world, hard enough in the best of times, but she also has the eyes of everyone in Panem on her, and Lawrence gives all parts of this complicated character equal prominence.

Unfortunately, aside from Katniss, every other character is underwritten and underutilized. When Peeta (Josh Hutcherson) shows up, a prisoner of the Capital, also being used as a publicity tool, the burgeoning uprising becomes a televised flame war, almost taking the place of the Games as a the prime viewing in Panem. He’s mostly just there as an inciting event and to look haggard and terrible on TV. This also revitalizes the love triangle aspect of the story between Peeta, Katniss, and Gale (Liam Hemsworth), but I’m okay with that side of things being underdeveloped, as the romantic angle is tedious and Gale has all the personality of wet bread. Familiar supporting players, like Haymich (Woody Harrelson), Effie (Elizabeth Banks), and Finnick (Sam Claflin) show up here and there and have a moment, but not much more.

This is endemic of the entire movie, most of it is just the slightest bit undercooked. At its best, The Hunger Games is a critique of media practices, the military industrial complex, war, and much more, all with a human face to ground it. Though that’s still in play, it’s never fully developed. President Snow (Donald Sutherland, who has never seemed more reptilian than in this role) and his forces are obviously evil and need to be taken down. But at the same time, you’re never quite sure that President Coin’s side is the best option. It’s better, sure, but there are hints that she’s still similarly fascist repressive in nature.

Director Francis Lawrence shows you glimpses of the uprising throughout Panem, but mostly in short, scattered bursts, almost like news bites, but it’s only dealt with in this offhand manner. There’s more time spent on the political workings in District 13 than the actual rebellion. It doesn’t need a ton of action, but like so much else in Mockingjay, this is an element that they will hopefully explore further in the next film.

That’s a sentiment you find yourself expressing throughout Mockingjay—Part 1, that it’s incomplete. They scrape at the surface of a number of elements here, but just brush away the top layer of dirt. There’s so much more depth to explore in the next movie. While I can’t wait to watch this back-to-back with Mockingjay—Part 2 when it drops next year—I think it will be great taken as a whole—on its own, Part 1 never truly satisfies.

Posted by Brent McKnight at 5:05 PM