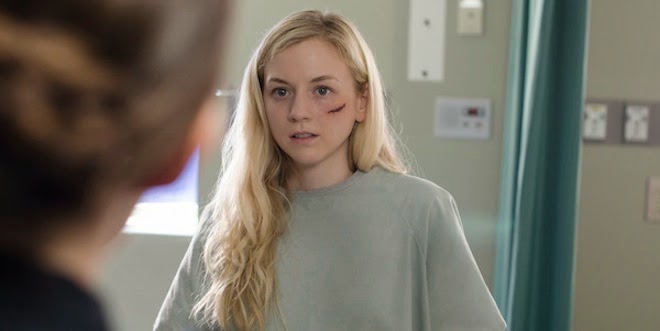 They’ve been hinting at it and building up to it, but tonight The Walking Dead finally lets you know what happened to Beth (Emily Kinney). Another one of the characters that had been, for too long, basically useless, Beth started to come into her own in the latter portion of season 4. In fact, maybe the best episode of the entire season, “Still,” belongs almost wholly to her, featuring two people, Beth and Daryl (Norman Reedus), and no one else. But can she carry an entire episode all on her own? You’re about to find out with “Slabtown.”

As usual, we’re going to take a stroll through Spoiler Town, so if you haven’t watched the episode yet, you may want to cool your jets for a while.

I have mixed feelings about “Slabtown.” As The Walking Dead did much of last season, they’re taking their time with stories, not feeling the need to check in with everyone every week—aside from Beth, there’s only one series regular anywhere in this episode. That’s great; it’s actually a refreshing change and a strategy I wholeheartedly endorse.

“Slabtown also tries to offer a different perspective on the zombie apocalypse than you usually get from the show. We know how life on the road goes, as well as the hazards of continual motion and searching for a new place to call home. That’s old hat. This offers a glimpse at how other people have managed to survive all this time, and lets you see their struggles and hardships. The phrase “everything costs something” comes up a lot.

That’s fine, it’s all well and good, but at the same time, this feels very familiar, and treads ground well worn by The Walking Dead over the previous seasons. Partially because of this, partially because in trying to introduce a whole new environment and set of characters, the action is needlessly drawn out, like they could have done just as much in less time. This is the first episode of season 5 that has filler.

Beth has a Rick moment when she wakes up from being unconscious, not knowing where she is, in what turns out to be a barricaded hospital in the ruins of Atlanta. There to greet here are the kindly Dr. Edwards (Erik Jensen) and the boss lady herself, Officer Dawn Lerner (Christine Woods). While not exactly a prison, Beth isn’t free to leave either. The officers patrol the surrounding areas, looking for people in need and the wounded—that’s where they found Beth, about to be a walker snack—taking them in, extorting payment in the form of labor. It winds up being and endless cycle. You work to pay back the resources they invested in you, and you pay for food and for protection and before long you accrue more debt than you pay off and you’re trapped.

This is an interesting scenario, as the place is relatively secure. Dr. Edwards, for instance, has time to listen to records, collect art, and get bored, a notion that now seems foreign to Beth. But because this is The Walking Dead, you know that there’s more going on than meets the eye, and that the sinister feelings are more than just Beth’s unease. But, maddeningly similar to some of the worst stretches of the series, this is endlessly hinted at, tiptoed around, and no one will give any kind of straight answer. While it’s understandable they’re not going to just blurt out every detail to a new person, everyone is obtuse for no reason, and it gets tedious in short order.

You’ve also heard Dawn’s justifications for the harsh price they charge before. All the talk of sacrifice for the greater good, and not wanting to do these things but needing to do them, it’s the exact same spiel you’ve heard countless times from the Governor a couple of seasons back. You’re going back over well-worn territory, and it comes across as such. You’ve been here before, and the show spins its wheels for a too long. 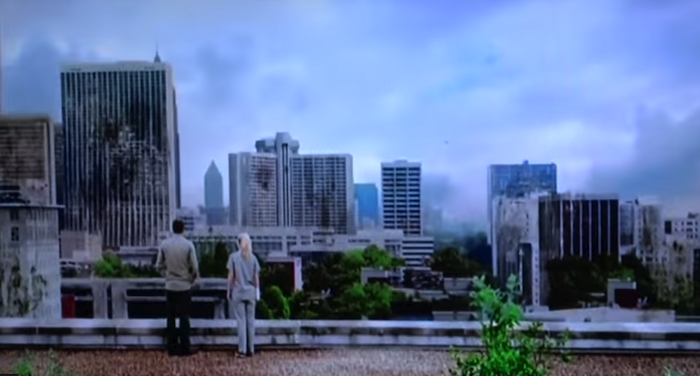 “Slabtown” is uneven and inconsistent. Dawn flip-flops from being a tough, in charge overlord to barely maintaining a grip on the hospital. One moment she’s sweet and nurturing, the next she’s slapping Beth, which happens quite a bit (it’s no accident I keep typing the title as “Slaptown”). You get what they’re trying to do, to show this conflicted character, capable of multiple emotions and faces. First, it’s exactly what they did with the Governor, and second, it’s too much for such a short time. Instead of being multifaceted, Dawn comes off as schizophrenic and haphazard, with the writers using her to suit their needs at any given moment, regardless of whether it’s earned or real or not. Everything is handled in such a surface manner that you never empathize with her, but they spend a lot of time trying.

Beth, however, shows again that she’ s shaping up to be another solid character. We’re not talking about the underwritten little girl that only existed to be a damsel in distress. All of her captors think she’s too weak for this world, but when she attempts to escape with Noah (Tyler James Williams), she shows just how strong and capable she’s become. She’s not someone to be trifled with anymore, and can handle herself when the shit goes down.

At times “Slabtown” plays out like zombie apocalypse medical drama, like a Grey’s Anatomy where everything is just a bit fucked up. There’s gore, but primarily it comes from medical procedures—they’ve been reduced to borderline barbaric practices (and there’s a fantastic moment with a rotting body pile). And though it picks up momentum near the end, the episode stumbles for a long while. They’re basically trying to introduce an entirely new world in the span of a single episode. It’s a lot to take in, too much, and aside from Beth, none of it gets the proper attention.

This episode does, however, introduce some threads that will have a big impact moving forward. Last week’s episode, “Four Walls and a Roof,” ended with Daryl emerging from the bushes with an unseen companion. We last saw him and Carol (Melissa McBride) taking off after the car that took Beth—it’s not a cross in the back window after all, at least not in a religious sense—and at the very end, Carol is brought into the hospital, unconscious and strapped to a gurney.

You’re not sure what to make of this, which is, of course, the point, and the episode ends on this cliffhanger. Earlier, Beth gets caught trying to escape, but Noah is able to get away. You have to wonder if Carol was in an accident and the officers found her, or if she and Daryl encountered Noah and figured out what is going on. It feels very possible that all of this could be a ruse, a rescue attempt. We’ll have to tune in next time to find out for sure, but that’s my guess at the moment.

One other hint “Slabtown” drops involves the Alexandria Safe Zone, or at least what sounds very much like the show’s equivalent of that. While chatting about where they came from, Noah lets it slip that he’s from Richmond, Virginia, and, as he says, there are walls there. We know the show, at least loosely, follows the same path as Robert Kirkman’s comics in regards to the big beats—Hershel’s farm, Woodbury, the prison, the Hunters. To this day, the safe zone play a huge role in that continuing story, so we presumed we’d get there eventually, especially after we saw photos of the production erecting walls around an Atlanta suburb. This, it seems, is our first hint of what’s to come. Unless it’s a red herring, which is possible, but the line is deliberately placed. If you know what to expect, it has more impact and you’ll have a very obvious reaction to this statement, but if not, you can pass over it as just idle chitchat that you’ll recall later when it comes up again.

Not a terrible episode by any means, “Slabtown” is definitely the weakest since The Walking Dead returned from hiatus in the middle of season 4. You can’t exactly call it a misstep, since there is some interesting stuff going on story wise, as well as important information, but the needlessly drawn out arc, surface level and superfluous character work, and re-walking well defined paths, all keep it from carrying the weight it needs to.
Posted by Brent McKnight at 11:48 PM