Movie Review: 'The Night Before' Is A Raucous New Holiday Classic 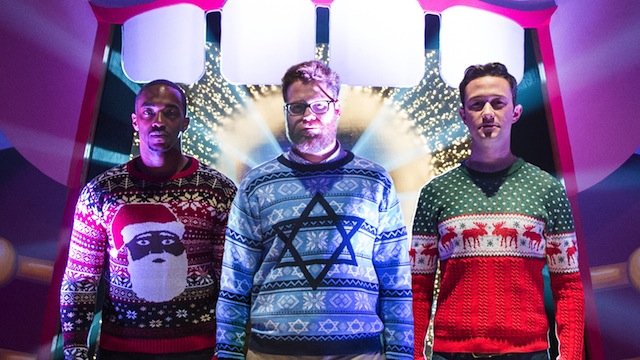 If traditional Christmas fare like Miracle on 34th Street and It’s a Wonderful Life are, well, a bit too traditional for your tastes—by that I mean there’s little to no hard drug use, few if any curse words, and absolutely no close up images of genitals—then 2015 is your lucky year. This holiday season we have director Jonathan Levine’s The Night Before, and it is crude, crass, sweeter than you may expect, and, most importantly, really goddamn funny.

Seth Rogen, Joseph Gordon-Levitt, and Anthony Mackie star as Isaac, Ethan, and Chris. Ethan lost his parents right before Christmas 14 years ago, and to cheer him up and get him out of the depression that followed, his two lifelong bffs did what all great friends do, they took him out and got him wasted. This Christmas Eve tradition has endured, but as they get older, real life starts to intrude—Ethan is about to have his first child, and Chris, a professional football player, is too famous to go out in public without being mobbed. Only Ethan clings to this annual evening of debauchery, using it as a crutch to avoid growing up and moving on, but they have mutually agreed that this is the last year. If they’re going out, however, they’re going out with a bang at the white whale of Christmas party they’ve been searching out for years.

What follows is a drug and alcohol fueled evening as they run through a best-of list of their previous years—they karaoke RUN DMC, bang hipsters in bars, and get rowdy in every conceivable way. From this collection of creative minds—Rogen’s writing and directing partner, Evan Goldberg (Superbad, The Interview), collaborated on the script—you get all the inventive use of blue language that you expect.

The script is gleefully profane in glorious, occasionally even head-scratching ways, but there’s also a greater emotional depth to the story than you may initially anticipate, though it does make sense. Last time Levine collaborated with Gordon-Levitt and Rogen it was for 50/50, which you may remember is a comedy, a comedy about a young man dealing with cancer that is as touching as it is funny. Though The Night Before is far more raucous an affair, it also has that softer side.

At its core, The Night Before is a sweet story about friendship, especially the uphill battle these relationships face as you get older and grow up, and how important they remain. Isaac and Chris appear to have their lives together, and think they do, while Ethan flounders, working dead end jobs, ruining romantic relationships with an inability to mature. While that’s very true, Isaac and Chris aren’t quite as solid as they think. Though he pretends to be a rock for his wife, Betsy (Jillian Bell), Isaac is freaking out about being a father, and while Chris is experiencing a late-career athletic resurgence, the reasons behind it aren’t entirely above board. 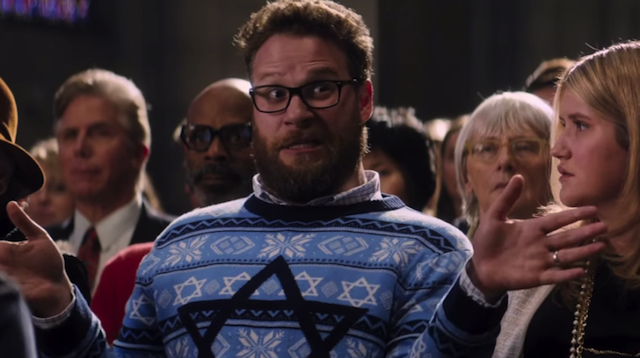 Through all of the let’s-get-wild shenanigans and chaos, the three also have to navigate the tricky waters of their friendship and adulthood. The Night Before is a balance between these two sides, and this sensitive center never negatively impacts the over-the-top mayhem, and actually makes the coarse, vulgar humor even more affecting and endearing, giving it unexpected layers.

There’s so much more to the story than just three friends going out and getting nuts, and the stars are all at the top of their games. Gordon-Levitt gives Ethan a complexity that belies the general approach of the movie, and while he could have easily been just a guy who needs to grow up, there’s an underlying psychological intricacy. Mackie is big and boisterous, which hides Chris’ deeper fear and insecurities, which he gradually lets out over the course of the movie. Rogen is essentially a more grown-up version of the jovial, goofy stoner he plays in most movies, but it’s as fun as ever, and that maturity that really sets this apart from his earlier roles.

In interviews leading up to The Night Before, Rogen has said that he couldn’t and wouldn’t have written Superbad today, that those things aren’t important enough to him that he would devote that much time to them anymore. That evolution—one that may have its origins in the likes of Neighbors— is readily apparent in this movie, on all fronts, and reflects the changing concerns of the creators as they themselves get older.

As you might expect from the folks behind the likes of This is the End, The Night Before is speckled with appearances from their celebrity friends. Bell (22 Jump Street) is a blast as the coolest wife ever, but also adds nice touches to her and Isaac’s marriage; Lizzy Caplan (Masters of Sex) is Ethan’s one-that-got-away; Mindy Kaling (The Mindy Project) lends her particular style of humor to a few scenes; and Ilana Glazer (Broad City) plays a human embodiment of the Grinch. And that’s just a few of the famous faces you’ll see.

Outside of the main cast, however, Michael Shannon (Boardwalk Empire, Man of Steel) is the true MVP. He plays Mr. Green, a weed dealer slash pseudo spiritual guide, punctuating the film with his special brand of intense menace, cut with an awkward humor, steering our heroes more than they’ll ever know. I can’t say enough about him, and as great as he is elsewhere, you’ve never seen him like this—he is what truly elevates this movie and makes it something special.

Granted, The Night Before does have a bit of a downturn in the middle where the pace starts to flag, and the emotional side of the story does spin its wheels for a few scenes—it’s damn near impossible to maintain the breakneck pace for an entire movie. And while there are great jokes, a number miss their mark. Still, this is a relatively minor concern, and The Night Before is funny and moving and destined to become a new, left-of-center holiday classic. [Grade: B+]

Posted by Brent McKnight at 3:21 PM