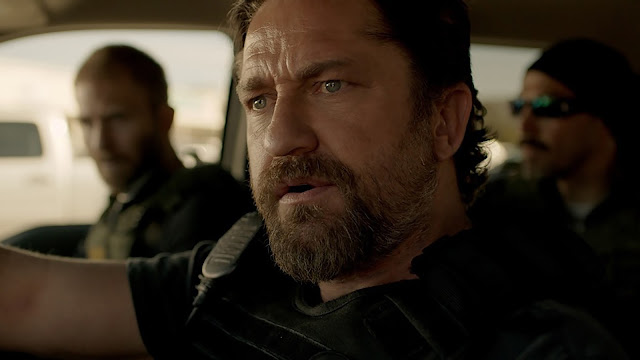 I should know better by now, I really should, but I can’t help but be irrationally excited for Den of Thieves. I know, I know, it’s a mid-January action movie that looks dumb as shit and macho beyond belief, but it also looks 100% my jam. Watching this new trailer, I can’t help myself, I giggled and clapped the entire time.

Den of Thieves still looks like a bargain basement Heat knock off and I am here for that, even though I know I shouldn’t get my hopes up. But my irrational love for Gerard Butler in full manic DT mode, chewing his way through no-frills action scenes, knows no bounds.

Den of Thieves marks the directorial debut of Christian Gudegast, who wrote London Has Fallen, another lunkheaded Gerard Butler action joint I unapologetically adore. So this should be fun. And for his first time out, Gudegast also enlisted O’Shea Jackson Jr, 50 Cent, The Wire’s Pablo Schrieber, and countless rounds of dummy ammunition.

And with a conceit like “The cops are the real bad guys,” “It’s the only bank that’s never been robbed, that’s why we’re going to rob it,” and lines like, “I ain’t cuffin’ up,” “That’s okay, I didn’t bring my cuffs anyway,” this brings a little bit of light to an otherwise dull and tedious January.

Here’s an actual synopsis if you care about such things:

DEN OF THIEVES is a gritty Los Angeles crime saga which follows the intersecting and often personally connected lives of an elite unit of the LA County Sheriff's Dept. and the state's most successful bank robbery crew as the outlaws plan a seemingly impossible heist on the Federal Reserve Bank of downtown Los Angeles.

This is normally the type of fare that heads directly to video, but Den of Thieves hits theaters on January 19, 2018. See you there. We all know it’s best to see Gerard Butler’s epic crazy eyes on the big screen.
Posted by Brent McKnight at 9:06 AM