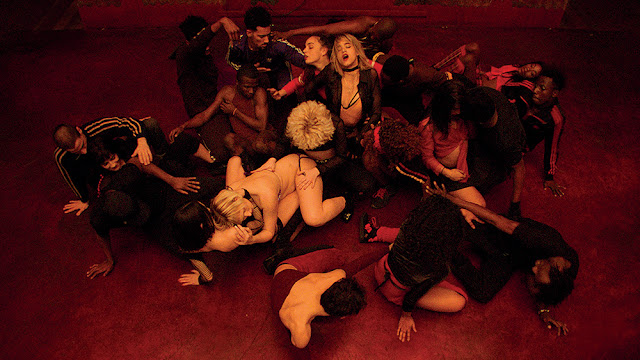 To know him is to have strong feelings about him. Whatever your stance, French button-pusher, Gaspar Noé, is back with his latest attempt to shock and awe and discomfit, Climax. (I, for one, really want his wife and frequent collaborator, Lucile Hadžihalilović, to make another movie, because her last one, Evolution, was an all-timer.) With a title like Climax, and the man himself behind the camera, you know we’re in for a wild ride, and if you didn’t, this new trailer drives that point home.

A24 is ramping up towards release, and it looks totally bonkers. And I can’t tell if it’s in a good way or if it will leave me cold, but however it shakes out, it looks like a spectacle to behold. If nothing else, this promises to be a feast for the senses. Visually stunning, even in this short burst, with the soundtrack, the piles of attractive, scantily clad dancers, and the looming threat of sex, violence, and the unexpected promises an experience you won’t get many places outside of a Gaspar Noé film. Your mileage on that may vary, wildly.

From director Gaspar Noé (Irreversible; Enter the Void; Love) comes a hypnotic, hallucinatory, and ultimately hair-raising depiction of a party that descends into delirium over the course of one wintry night. In Climax, a troupe of young dancers gathers in a remote and empty school building to rehearse. Following an unforgettable opening performance lit by virtuoso cinematographer Benoît Debie (Spring Breakers; Enter the Void) and shot by Noé himself, the troupe begins an all-night celebration that turns nightmarish as the dancers discover they've been pounding cups of sangria laced with potent LSD. Tracking their journey from jubilation to chaos and full-fledged anarchy, Noé observes crushes, rivalries, and violence amid a collective psychedelic meltdown. Starring Sofia Boutella (Atomic Blonde) and a cast of professional dancers, Climax is Noé's most brazen and visionary statement yet.

Climax opens in the U.K. on September 21, and while there’s no word when A24 will drop it on U.S. shores, my guess is it will be before the end of the year and that we’ll hear news on that front soon.

Posted by Brent McKnight at 9:01 AM