This 'Suspiria' Trailer Will Creep Out Your Morning 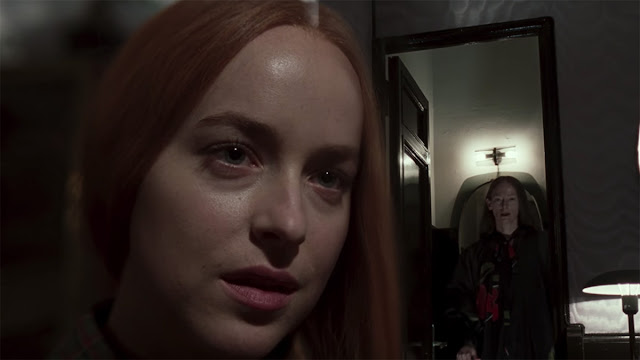 Remakes, remakes, blah, blah, whatever. It’s all been said before, and no matter what, I’m all kinds of jazzed for Luca Guadagnino’s remake of Dario Argento’s 1977 horror fave Suspiria, even if it is two-and-a-half hours long. And this new trailer only makes me want it more. Take a gander after the jump.

This has damn near everything I want out of a movie. We have witches, ballet, weird shit happening all over the place, creeping tension, weird moods and atmospheres, and many other eerie goings on. While I’m fully psyched, I’m sure Suspiria is going to be a movie that starkly splits viewers. It looks weird as hell and not necessarily all that audience friendly. I feel like people may react to this like they reacted to mother! last year, but we’ll have to wait and see on that.

Argento’s film is renowned for its striking visuals and bold swaths of color. Though Guadagnino looks to have toned things down in that regard, Suspiria definitely has a distinct visual style of its own. From what we see here, there’s no shortage of unsettling, off-kilter imagery to unnerve us and make us squirm in our theater seats. The Call Me By Your Name director certainly looks like he’s putting his own stamp on the material—not to mention the fact that the remake is a full 60 minutes longer than the original, which provides ample space to leave his mark.

As a darkness builds at the center of a world-renowned dance company, its artistic director (Tilda Swinton), a young American new to the troupe (Dakota Johnson), and a grieving psychotherapist (Lutz Ebersdorf) become entangled in a bloody, sighing nightmare.

I have to say, I love the phrase “bloody, sighing nightmare.”

Suspiria will premiere at the Venice Film Festival, which gets underway later this month. After that, it hits L.A. and New York theaters on October 26, followed by a wider release on November 2. I may or may not be marking the days off on my calendar.
Posted by Brent McKnight at 8:21 AM