The early trailers gave the impression that writer/director duo Gerard Bush and Christopher Renz’s Antebellum was a riff on Octavia Butler’s classic sci-fi novel Kindred. Though the two attempt to tread similar thematic territory, and there are a few other similarities, that’s really where the parallels end. While Antebellum is a gorgeous film to look at, and has admirable goals in mind, it misses on most accounts, falls into all-too-common traps, and the end result plays like an overlong episode of Black Mirror.

The story picks up on a plantation in the Antebellum South, an especially oppressive one commandeered by the Confederate army, overseen by the vicious Captain Jasper (Jack Huston, Ben Hur) and cutting wife Elizabeth (Jena Malone, The Neon Demon). The focus of the narrative is Eden (Janelle Monae, Moonlight), a slave, surviving this brutal ordeal. That’s the first third of the film, which then leaps through time to the modern day. There we encounter successful author, historian, and activist Veronica Henley (also Monae), dealing with the modern incarnations of the racism ingrained into the very fabric of America.

[Related Reading: This 'Antebellum' Trailer Does Not Make Us Any Less Excited For This Movie] 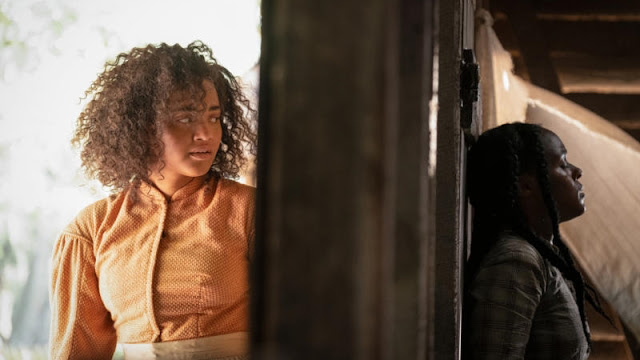 What flows from this is a ploddingly unfolding mystery that begets a horrific reality. There’s something off about this world—soldiers chant slogans that come straight from an alt-right rally and rhetoric employed by analogous groups, as well as a few anachronistic flourishes—but bigger picture isn’t clear immediately. (Though it becomes so in short order, the film isn’t nearly as clever as it thinks.)

Antebellum aims to examine lingering historical trauma and the racial wounds that carry through generation after generation. Noble goals, a necessary discussion, and certainly a topic that at the forefront of the national consciousness right now. And Bush and Renz just whiff. It’s a big swing and a big miss. 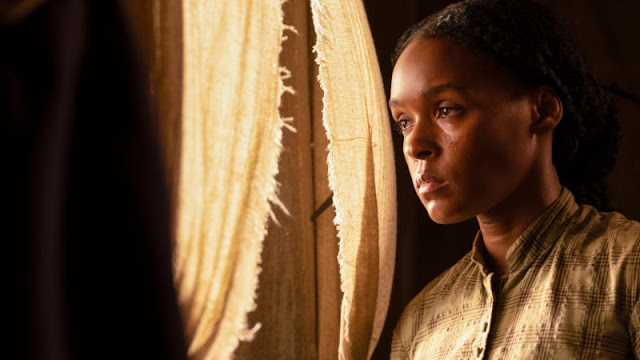 Yes, Black people have been and continue to be brutalized in this country. But Antebellum tumbles into that familiar pit that captures so many similar narratives, wallowing in that misery and offering little else. The Antebellum portion watches like a laundry list of horrors endured by Black people. Not only is it familiar territory (guess what happens to the pregnant woman?), it’s been done much more effectively, and the film has nothing more to say than this is bad. It’s cruelty for cruelty’s sake, perpetrated by villains who are cackling, near-finger-tenting caricatures of evil. Rather than making any point or providing insight, it comes across a gratuitous, full of empty philosophical platitudes that ring hollow.

The first two acts each drag. It doesn’t take long before the Antebellum scenes become repetitive, and when the film transitions to Veronica, things don’t improve. We see her with her husband and young daughter, appear opposite a right wing pundit on a Fox News style propaganda show, and speak at a conference. Most of this time, however, is Veronica on a night out with her girls (Gabourey Sibide and Lily Cowles). Again, the script tries to draw connections between distinct eras, but with the same blunt lines. The narrative stretches and strains to fill this space. 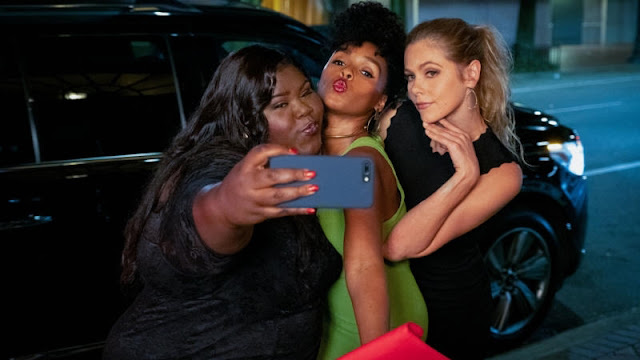 For all the issues, Antebellum looks fantastic. Their first feature, Bush and Renz cut their teeth directing music videos, which makes a great deal of sense. Working with cinematographer Pedro Luque (Don’t Breathe, The Girl in the Spider’s Web), they assemble a collection of striking images and elaborate choreography—the film begins with an impressive one-take that crisscrosses the entire plantation. But with the surrounding lack of depth, it offers little more than a pretty aesthetic.

Monae does what she can, but as written, Eden/Veronica is all surface level—she’s a collection of traits, a mouthpiece for what the writers want to say rather than a character with a discernable personality of her own. Which is too bad, because Monae can be so fantastic and is way underutilized as an actor.

[Related Reading: 'The Girl in the Spider's Web' Movie Review] 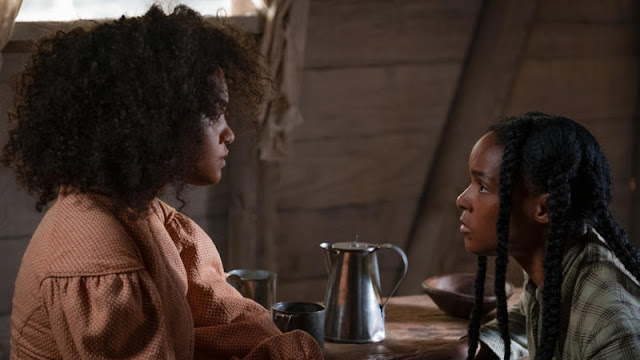 It’s ambitious, I’ll give it that, but while there’s a worthy, crucial, interesting story to tell here, it isn’t Antebellum. It screams how important it is, and how clever it is, but spends more time on that than delivering anything substantive. There’s sure to be a ton of great writing about and surrounding Antebellum, and more discussion about race in America is always welcome, and I look forward to reading what people with far more insight and perspective have to say on the matter. [Grade: C-]

Posted by Brent McKnight at 1:32 PM