'The Mandalorian' Season 2 Trailer: This Is The Way (And Baby Yoda Is Still Cute) 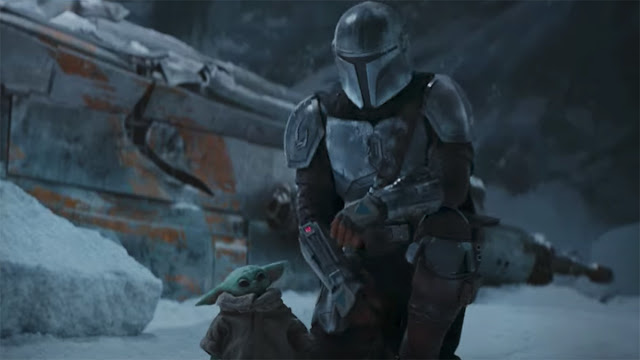 Season One of Lucasfilm’s Star Wars series The Mandalorian was divisive. Some loved it, others hated it. I’m in the camp that dug the episodic frontier western-in-space vibe. A friend compared it to Kung Fu, and though I wouldn’t have gotten there on my own, it’s an apt comparison. Anyway, Season Two of The Mandalorian will now officially release on October 30 on Disney+, and this news comes with a shiny new trailer.

This trailer for The Mandalorian hits all the marks. We get tense showdowns, high noon style shootouts, a still-reluctant hero, cool creatures, and, most importantly to obsessive fans, Baby Yoda. Or The Child or whatever you want to call the adorable little bugger.

[Related Reading: 'The Mandalorian' Trailer Pumps Up the Werner Herzog]

The groundbreaking effects work, again, looks amazing, as expected. We see a few familiar faces, like former Shock Trooper Cara Dune (Gina Carano) and bounty hunter Greef Carga (Carl Weathers). We don’t, however, get much in the way of newer additions. No Moff Gideon (Giancarlo Esposito), who showed up in the final episode of Season One and promises to be the main big bad this time around. We’re also getting existing characters from Star Wars lore, like Ahsoka Tano played by Rosario Dawson and Captain Rex (Temeura Morrison, who is also rumored to play Boba Fett at some point, but we’ll see how that goes.)

In addition, Timothy Olyphant plays Cobb Vanth, a character who showed up briefly in Chuck Wendig’s Aftermath books. He’s a kind of self-styled lawman on Tattooine who wears what most believe to be Boba Fett’s armor, and this feels like perfect casting. Katee Sackhoff shows up as a live-action Bo-Katan Kryze, a character she voiced on the animated Rebels and Clone Wars. Michael Biehn has also been cast, though in an as-yet undisclosed role.

Again, The Mandalorian put together a strong crew of directors, including series mastermind Jon Favreau, Peyton Reed, Robert Rodriguez, and Carl Weathers himself. All in all, this definitely looks to expand on and dig into the post-Return of the Jedi reality in that far, far away galaxy.

The Mandalorian finished production on Season Two just before COVID-19 shut everything down. That’s why we’re getting the first of eight new episodes on Disney+ starting October 30.
Posted by Brent McKnight at 8:02 AM