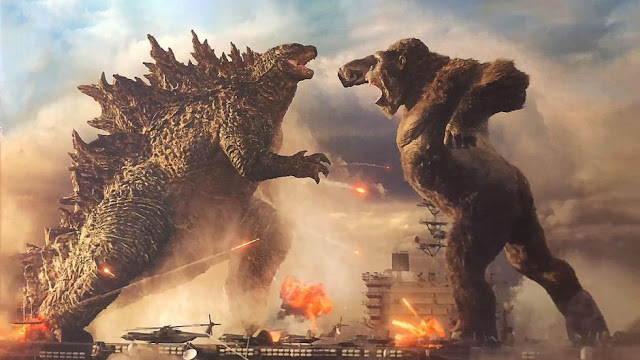 I’m a simple man with simple tastes. Give me a giant ape fighting a skyscraper-tall lizard and I’m good. I don’t really care why they’re fighting, or where, or what they step on in the process. That’s all beside the point. And this is precisely what the first trailer for Godzilla vs. Kong delivers. Check it out for yourselves.

Legendary has been building up to this clash for a while now, starting with Godzilla in 2014, then 2017’s Kong: Skull Island and Godzilla: King of the Monsters in 2019. All of those movies have gaping flaws but, to one degree or another, I also find them all quite entertaining, if dumb. But again, I’m easy, slap some giant monsters on screen and I’m there.

I’m interested in watching Godzilla vs. Kong for a variety of reasons, but a key one is director Adam Wingard. Most known for his indie horror films like You’re Next and The Guest, this is his first film on anything near this scale.

It’s also not the first time this franchise has tapped a relatively new director who made a splash on the indie circuit. Godzilla was Gareth Edwards’ first film after his low-budget creature feature Monsters. The same goes for Skull Island’s Jordan Vogt-Roberts, coming off the indie dramedy Kings of Summer. And even though he’d done writing work for some significant superhero movies, Michael Dougherty took a big jump up in size and scale for King of the Monsters.

Like most of the previous films, Godzilla vs. Kong has an impressive human cast. There’s Alexander Skarsgård, Millie Bobby Brown, Rebecca Hall, Brian Tyree Henry, Kyle Chandler, Lance Reddick, Eiza Gonzalez, and a ton more. And like previous installments, I don’t expect much from any of them. Again, that’s not the point.

Here’s a synopsis if you need more information than Godzilla fights King Kong:

Legends collide in Godzilla vs. Kong as these mythic adversaries meet in a spectacular battle for the ages, with the fate of the world hanging in the balance. Kong and his protectors undertake a perilous journey to find his true home, and with them is Jia, a young orphaned girl with whom he has formed a unique and powerful bond.  But they unexpectedly find themselves in the path of an enraged Godzilla, cutting a swath of destruction across the globe.  The epic clash between the two titans—instigated by unseen forces—is only the beginning of the mystery that lies deep within the core of the Earth.

Like many other movies, Godzilla vs. Kong was delayed due to COVID-19 stomping on movie theaters like one of these legendary creatures. It’s now part of Warner Bros.’ new strategy of releasing big blockbusters in limited theaters and on HBO Max the same day. And that means we finally get to see these two titans face off on March 26.

Posted by Brent McKnight at 8:19 AM