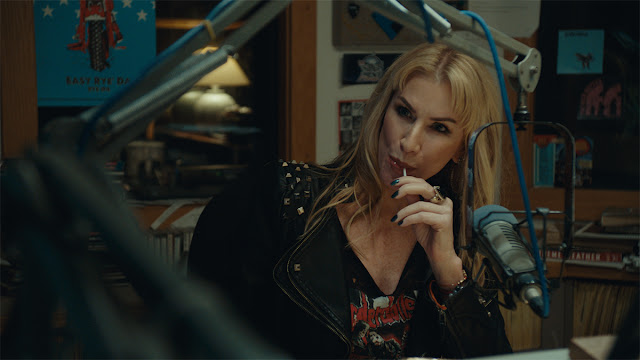 People often reflect upon the choices that brought them to a certain point in their lives. We’re talking from a big, life-long perspective here. This happens more and more as we age and come to major life changes, like, say, retirement. Erik Bloomquist’s Ten Minutes to Midnight takes this set up but asks the question “what if a vampire movie?”

The set-up is simple. On her last night before a semi-forced retirement, a rabid bat bites late-night heavy metal DJ, Amy Marlowe (The Texas Chainsaw Massacre 2, Halloween II). Over the course of the evening, she transforms into a bloodthirsty version of herself and terrorizes her sleazy boss (William Youmans), loyal audio engineer (Adam Weppler), weirdo security guard (Nicholas Tucci), and her young, career-minded replacement (Nicole Kang), all of whom are trapped in the studio by a hurricane-force storm outside. 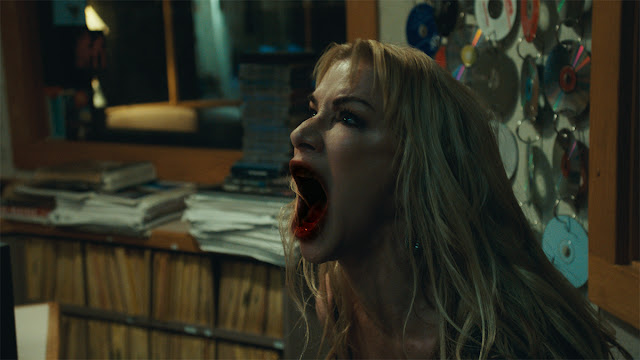 It’s easy to imagine this unfolding as a gore-soaked rampage, Amy tearing through her colleagues one by one, slurping from their open veins. However, Bloomquist eschews typical vampire movie trappings for less obvious moves. Don’t worry, there are plenty of bloody corpses, but Ten Minutes to Midnight doesn’t necessarily hinge on the expected genre beats.

As Amy’s condition worsens, she experiences hallucinations, twisted flashbacks to various points in her life and career, all warped and heightened into straight up nightmares. The line between reality and these dark fever dreams blend and blur as she relives key moments on her journey. While they don’t always land, the film takes big, often wild swings. 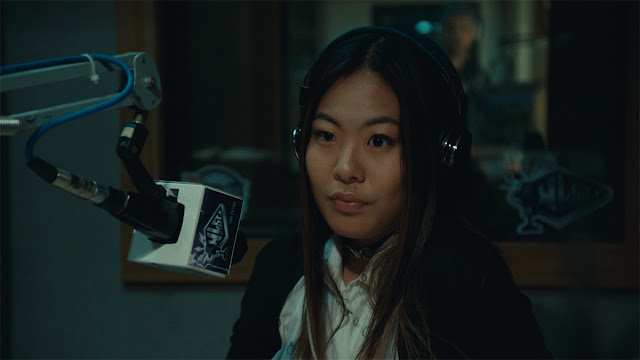 Underneath the gore and the vampire accoutrements, Ten Minutes to Midnight attempts to examine troubles faced by women in the workplace, especially those who work in media. The struggles to not only get a job, but to keep it, appease the powers that be, bending over backward to not be labeled difficult or a bitch, and the compromises made every step along the way.

The plot frames Sienna, Amy’s replacement, as an antagonist, as the pretty young thing that caught the boss’ eye—he cares more about her looks than her knowledge of the field, qualifications, and credentials. And while cutthroat and conniving, she’s also the inevitable end result of a corrupt system, hardened and conditioned to believe she can only succeed at the expense of another woman, that she can only ascend by knocking someone else down. 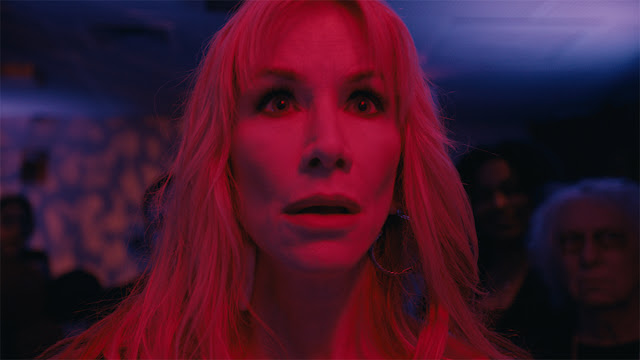 Not always entirely focused, Williams’ performance drives this home this point and cements the thematic weight. She brings a palpable rage and frustration to the broad horror strokes—it must be cathartic to rip the throat out of a boss like this—and adds a resonance to the film.

Ten Minutes to Midnight isn’t as easy a movie to categorize as it first appears. Yes, it’s a horror movie; yes, it’s a vampire tale; yes, it’s an homage to cheap ‘80s genre fare—from the logo to the score to the general aesthetic and story. But while it is those things, it also offers something else. Bloomquist takes risks and makes unexpected choices, the film has concerns other than bloody theatrics, and there are more ambitions and ideas to chew on than the package indicates. [Grade: B-]

Posted by Brent McKnight at 9:15 AM