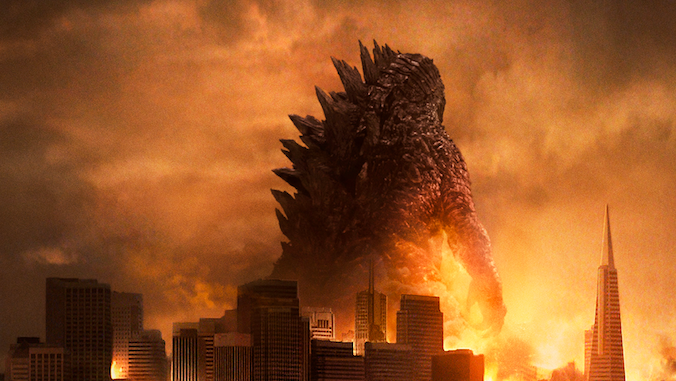 When you heard that Godzilla was getting another American remake, you weren’t the only one to release a groan and ask, “really?” Toho’s venerable giant, destructive lizard played a key part in many of our youths, and Roland Emmerich’s 1998 attempt to bring the big guy across the ocean was so bad that the foul taste still lingers in many of our mouths. As good as director Gareth Edward’s reboot has looked, and as excited as we wanted to get, we had to keep our expectations and enthusiasm in check. Lucky for us, Edwards loves this big green bastard as much as we do, and that fact is evident in every frame. Not without flaws, Godzilla is huge, epic, and most importantly, a ridiculous amount of fun.

Edwards’ only feature directorial effort, 2010’s Monsters, left the creatures off the screen until he absolutely had to show them. Much of this was due to budget constraints—Edwards did all the visual effects himself—but it forced him to focus on the characters and their story. In Godzilla, however, this is a choice, not a necessity. The monsters—yes, plural—are hinted at and teased, building towards the big reveal. They’re not kept under wraps quite as long, but Edwards parcels out the creatures piece by piece—a foot here, a scale there—and chooses the perfect moments to unveil them.

Like with any good monster movie, the story revolves around the people who have to deal with the giant creatures. In this case it’s fine, not great, but it does the trick. Max Borenstein and David Callaham’s script spans eras, and from the opening credits, Godzilla harkens back to the long history of the franchise, including ominous faux newsreel footage from the 1950s. Joe Brody (Bryan Cranston) works at a nuclear power plant in Japan, and when a disaster costs him his wife (Juliette Binoche), he throws himself into an obsessive quest to expose what he believes is a massive cover up. He knows this wasn’t a simple earthquake, as is the party line, but his search alienates him from everyone, including his soldier son Ford (Aaron Taylor-Johnson). When he inadvertently uncovers the existence of an ancient monster, one the government has been hiding, the destruction begins in earnest.

This part of the film peaks with the relationship between Joe and Ford. The rest of the human side of Godzilla is far less developed than you hoped, especially when talking about the female characters. Elizabeth Olsen plays Elle, Ford’s wife, and Sally Hawkins plays Vivian, Dr. Ichiro Serizawa’s (Ken Watanabe)—the monster expert—assistant. Elle does nothing but provide some open-mouthed reaction shots as Godzilla and MUTO (Massive Unidentified Terrestrial Organism) stomp through cities, and serves as a symbol of the home that Ford struggles to get to. You barely even learn Vivian’s name, and there is absolutely no reason for her to be here. Both are fantastic actors, and both are totally squandered. And Binoche, of course, only exists in order to die, as a catalyst for all of the mayhem. Not that anyone in this movie is asked to do much, but these three are especially wasted. There must be more from all of them that wound up on the floor of the editing suite.

You can probably guess that all of this is a secondary concern—most of the film’s time and energy in this realm is spent on the frazzled military response. Once the action gets rolling, it’s a constant build as the slew of destructive monsters converge on San Francisco. It seems like the citizens have ample warning, but the city is still full of people, including some who still seem to be at work in their downtown office. They have more pressing concerns. The monster fights, and there are many, are giddy affairs, and Godzilla is a disaster movie on a grand scale.

It helps that the creature design is incredible, and feels both familiar and new. Godzilla himself is a primordial force of nature, as are the others. He’s part dinosaur, part classic kaiju, and somehow, through the magic of CGI, also retains the original charm of a guy in a rubber suit stomping through a shoddy cardboard replica of a city. The additional creatures, new arrivals not from the original canon, resemble suped-up versions of the bugs from Starship Troopers.

Edwards takes great care to show the monster action from down low, from the point of view of the humans scurrying around at ground level. You’re constantly looking up, jaw agape, marveling at these beasts wreaking havoc on the Bay Area. With the depth of field allowed by the 3D, Edwards places you right in the middle of the conflict. There were even a few times, watching the monsters battle in the distance, where my initial thought was that people were standing up in the theater only to realize they were figures onscreen. That’s how in the thick of it you are, and the scale and scope are awe-inspiring.

The narrative balances multiple threads, keeping each one moving forward, but never straying far from the main attraction. These mostly revolve around Ford being the only guy who can actually save the day, and coping with that fact as he tries to get home to see his family one more time. All of this leads up to the big collision that, even though you know what’s coming, totally exceeds your expectations. Even within a generally predictable framework, there are still multiple shifts and twists, all well earned, that are legitimately surprising and that take your breath away when they hit.

This is a monster movie, plain and simple. The human component exists to prop up the creature and slap a relatable face on the action, but Godzilla delivers everything you want. The movie makes the franchise its own at the same time that it pays tribute to the long, storied history. Never skimping on the spectacle, all the pieces connect, and you’ll walk out of the theater totally satisfied by the massive scale of the mayhem.

Posted by Brent McKnight at 5:08 PM