'You're Next' Movie Review 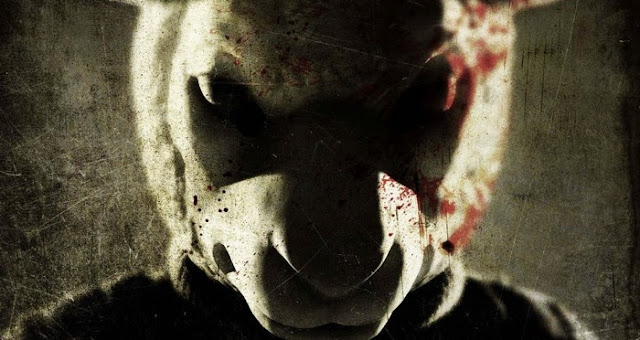 It’s all too rare in these days of continual, 24/7 movie hype to come across one that actually lives up to the hyperbolic surge. Adam Wingard’s (“V/H/S”) newly released home invasion film, “You’re Next,” not only meets, but exceeds expectations, which is impressive, because there has been a ton of steam behind this movie. The indie horror offering originally made the festival rounds back in 2011, where it gathered glowing reviews from every genre-centric writer—and most others as well. The rest of us finally have the chance to see the movie, and it was totally worth the wait. We’re talking twisted, gory, scary, tense, and shockingly funny. I mean that in both the sense that, from the way the movie has been promoted, you wouldn’t expect many laughs; and also in what the film makes you laugh at. “You’re Next” isn’t genre bending, it’s genre done very, very well, and one of the most entertaining movies of the year.

After witnessing a brutal home invasion murder, we’re introduced to the Davison family, a wealthy, deeply dysfunctional group, gathering for the 35th anniversary of parents Paul (Rob Moran) and Aubrey (Barbara Crampton). It’s been a while since the entire clan has been together, and from the moment they’re all under the same roof, in the parent’s isolated country home, you see why. This is the kind of family that, while everything looks great on the surface, the façade is paper-thin. Every exchange is a veiled barb, and they needle one another until they’re on the verge of explosion. Struggling professor Crispian (A.J. Bowen) brings his new girlfriend Erin (Sharni Vinson) into this mess that includes his brothers Drake (Joe Swanberg) and Felix (Nicholas Tucci), his pretentious artist girlfriend Zee (Wendy Glenn), and sister Aimee (Amy Seimetz) with her documentary filmmaker boyfriend Tariq (Ti West). The cast is like a who’s who of modern indie horror faces.

This is one of the unexpected pleasures of “You’re Next.” You don’t particularly like the family, but you like watching them interact. Simon Barrett’s script does a fantastic job creating a dynamic between the characters and giving each their own distinct personality in a short period of time, no easy feat, and though they may be assholes, they’re believable and very real. Though the focus shifts from the murder to the family, Wingard and company never let you forget about the danger lurking just beyond the walls. Horror tropes like point of view shots from the killer’s perspective outside the window, are used just enough to get what you need from them, without feeling too oppressive. And when a crew of killers in emotionless animal masks shows up and shoots Tariq in the face with a crossbow, it is on. 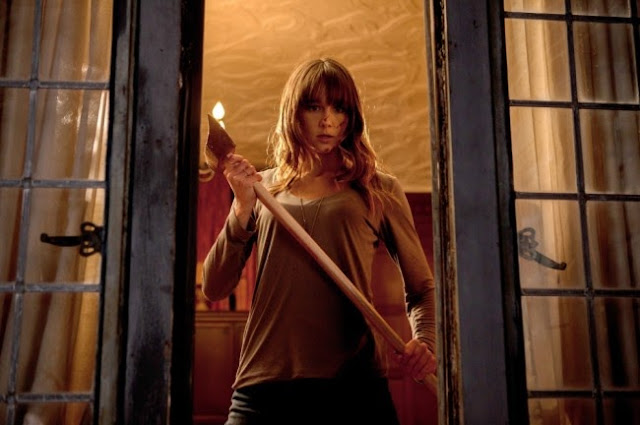 In so many movies when the shit hits the fan, people either go one of two ways, shutting down completely, or turning into unwarranted badasses. “You’re Next” is a breath of fresh air because the response feels much more reasonable. Sitting in the theater you think, that’s probably how you would react. Some members of the family do go catatonic, but Erin steps up and takes a hesitant control. She grabs whatever weapons they can find. They may not know what to do with them, but she knows they’ll need them. She’s scarred as hell, too, on the verge of panic, but they have to do something, and the way she acts, while not always perfect, is also very real.

Watching them, home invasion films seem like an easy thing to pull off, especially for filmmakers working on a tight budget. You have a limited number of actors, no big, costly scenes, and a contained set of locations. But they’re incredibly difficult to do well, and when you fail, you fail miserably. For every one that delivers, you get dozens that suck the life out of you as a horror fan. Not only does “You’re Next” breathes some life into a genre, they never abandon the character and story side of the equation, which keeps you invested throughout. The end leaves something to be desired, it isn’t terrible, but it isn’t the most satisfying conclusion you’ve ever seen. But that’s a minor quibble for a movie where, even in quiet moments, the pace and tension never flag, you laugh at unexpected moments, there are a couple of surprises in store, and that comes off as a tight, angry “Home Alone.” The end result is a complete blast, and is one of the most entertaining movies, horror or otherwise, that you’ll see in theaters this year.
Posted by Brent McKnight at 9:51 PM