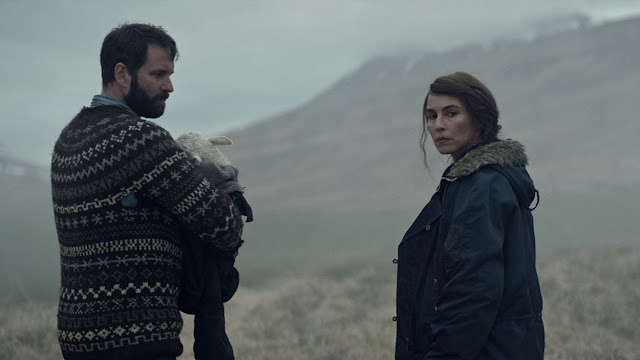 For most of the 106-minute runtime of Valdimar Johannsson’s directorial debut, Lamb, the film plays its bizarre concept entirely straight. But there’s a moment where the surreal conceit at the center of the story just becomes silly. Watching it, at a certain point, I thought this has to be intentional, they have to know what they’re doing, this is a comedy, right? But I honestly don’t know.

On the surface everything appears earnest and serious, but there’s a tipping point where, purposeful or not, this absurdist parable become simply absurd, almost self-parody. Intentional or accidental, either way, I laughed harder at the final 30 minutes than at most comedies this year. There’s a late reveal where, watching Lamb completely alone, I stood up and cheered because it is so damn amazing and ridiculous. 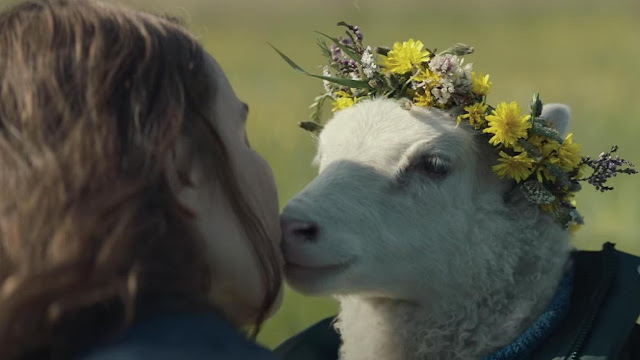 Childless couple Maria (Noomi Rapace) and Ingvar (Hilmir Snaer Gudnason) live alone on their remote Icelandic sheep farm. One day they discover a newborn sheep and, for reasons not immediately apparent, bring it into their home and raise it as a child. Though unusual for sure, for the most part, they go about life like proud, doting new parents. This, of course, weirds people out, namely the only other real character in the film, Ingvar’s brother Petur (Bjorn Hlynur Haraldsson, the “Just be a cool guy” from Eurovision Song Contest).

Just a heads up, I’m going to try to discuss Lamb without divulging too much, even major plot points that happen early on, but it’s going to be a tiptoeing act. If you’re going to go into this, going in cold is the best way.

One of the things Lamb does best is play things close to the vest. Johannsson shows the situation in close-up, both literally and figuratively. This lets the audience come to certain conclusions before he pulls back and gives a wider view, exposing an unexpected truth. (At least they’re intended to be unexpected, intuitive viewers will likely suss them out.) We’re presented with a reality, allowed to sit in in long enough that we generally take it at face value, then the filmmakers force us to shift perspective and account for new facts. Some instances work better than others, but the film uses this tool so much eventually we don’t trust anything, unsettling the viewer and our sense of what is and isn’t real.

[Related Reading: Why 'Prometheus' is a Christmas Movie] 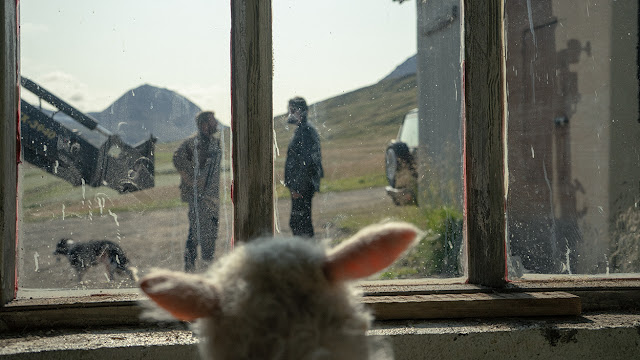 With only a handful of characters and a sparse, isolated landscape, austere is the best way to describe Lamb. Shot with a cold remove, the film keeps us at arm’s length. There’s little dialogue, and Johannsson and cinematographer Eli Arenson use a lot of still, static shots of barren landscapes and animals doing animal things, with an ominous score layered over the top to imbue these images with meaning and gravity. To mixed effect.

Stingy as ever with the details, and esoteric and obtuse at all turns, Lamb presents a dreamy, gauzy parable of parental grief. Maria and Ingvar have obviously dealt with some sort of loss, and the emotional distance Rapace and Gudnason create between their characters is as great and harrowing as anything found in the expansive natural surroundings. Ada, as they name their “daughter,” melts the ice between them and we watch them soften and reconnect in a tender, quiet way. 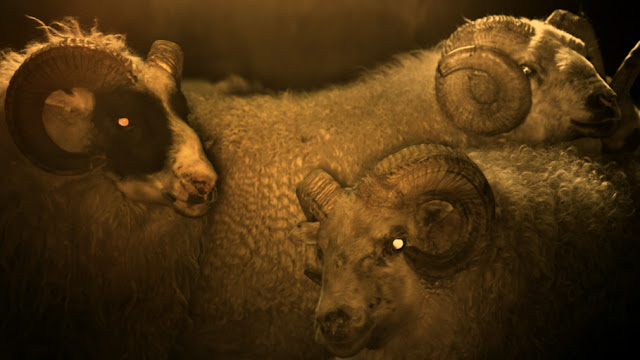 Whatever else there is to say about Lamb—and there is a great deal to talk about in the future when people have seen it for themselves—it is full of excellent animal acting, particularly, dogs, cats, and the ever-present sheep. In many cases they’re more emotive and affecting than the human performances. Ada’s birth mother, desperately, doggedly following Maria and Ingvar, practically bleats, “Give me back my baby!” in true horror movie mother fashion.

I’m not even going to attempt to grade or rank this; I wouldn’t know where to begin and I can’t even mention my favorite bits without ruining them. The gradual, deliberate pace and purposely impenetrable narrative are not for everyone, or even most people. These choices all appear intentional, even if the intention behind them, and what we’re supposed to take from them, remain largely obscure. Because of this, Lamb lends itself to multiple readings and interpretations, which is the point. I don’t know that this is a comedy, but on the other hand, I don’t know that it’s not.