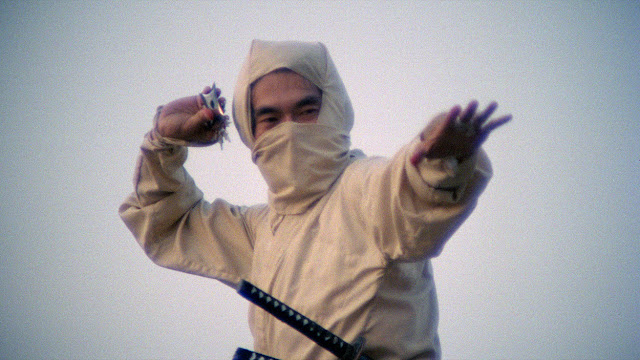 On its own, New York Ninja is plenty crazy. A bonkers-ass 1980s action movie that’s cheap and campy and utterly absurd at every turn, it’s the type of artifact many people stumbled across on late night cable as kids and were like, “Hell yeah, this freakin’ rules.” And it’s does rule, and we’ll get back to that. But the story behind how this movie actually came to be released is even more unbelievable than the plot of the film. Well, maybe, New York Ninja itself often defies belief.

Originally filmed in 1984, New York Ninja was never fully finished and never saw the light of day, at least not until this, the year of our lord 2021. Written, directed, and starring Taiwanese martial performer John Liu (Blade of Fury, Kung Fu Commandos), after principle photography wrapped, the project was abandoned before completion. Three-and-a-half decades later, this legend, still unedited, turned up in a lot purchased by Vinegar Syndrome, the niche physical media company specializing in rare cult and exploitation fare. And it couldn’t have found a better or more appropriate home. 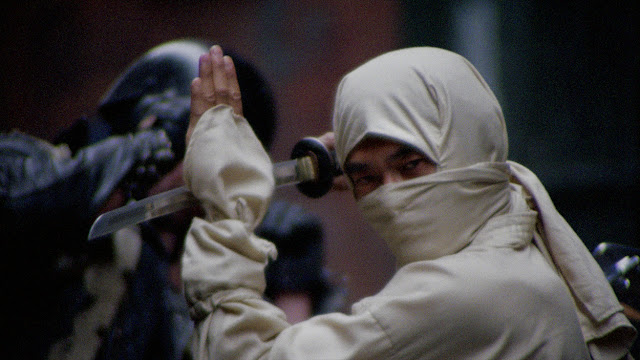 The team at VS restored all the footage and assembled a finished print of the movie. Everything, from scripts to audio and everything else, has been lost over the years, so they had to piece it together as best they could. They also had to record all new dialogue and drafted an all-star team of awesome talent including Don “The Dragon” Wilson (Bloodfist), Linnea Quigley (Return of the Living Dead), Cynthia Rothrock (Martial Law), Leon Isaac Kennedy (Penitentiary), Michael Berryman (The Hills Have Eyes), Ginger Lynne Allen (Vice Academy), and many more genre luminaries.

This isn’t the first time treasures of this ilk have been unearthed. Miami Connection a few years back comes to mind. But New York Ninja is unique in that most of those were complete films that, for one reason or another faded into the ether. This, however, became a unique collaboration across generations. The result is an unhinged martial arts extravaganza that’s nothing if not a total blast. It’s a spectacle to behold for sure. 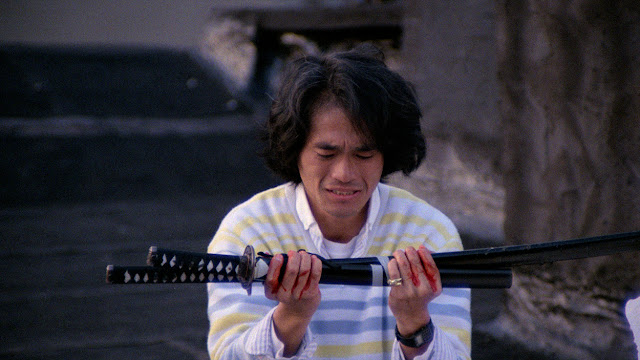 Not to be outdone, as unusual as the film’s journey is, the film’s plot is equally eccentric. John Liu plays John Liu (voiced by Wilson), something he’s done multiple times in his career. He’s a sound tech on a news crew and, after a gang of human traffickers praying on the women of New York City murder his wife, he becomes a ninja vigilante, ridding the streets of crime. In addition to kidnappers, killers, rapists, and general goons of all stripes, there’s also the mysterious Plutonium Killer, who murders his victims with radiation. Or something. It was the ‘80s, things get wild.

New York Ninja is a hodgepodge of dodgy ideas and bizarre choices. This is the NYC of the early ‘80s, every inch covered in graffiti, where some neighborhoods could be and often were used as sets for cheap post-apocalyptic movies. The roving gangs look like the Village People on bath salts. There are cowboys, near-mummies, lots of black leather and half-shirts, and, no joke, at least two dudes just chilling wearing jockstraps on the outside. You know, for fashion. 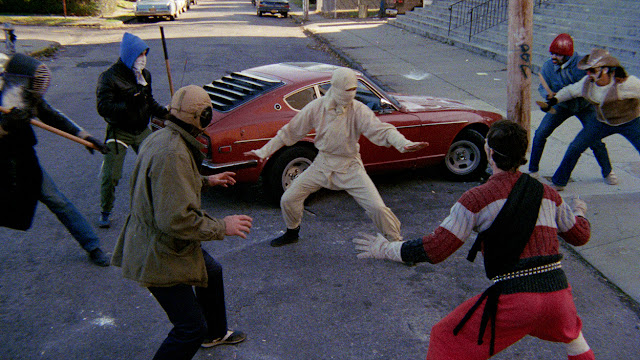 Again, because the 1980s, all of these street toughs carry nunchucks they don’t know how to use, or maybe a whiffle ball bat wrapped in masking tape. There’s a tough-guy butler who fences and has a rat-tail, and another guy in a sleeveless leather vest and eye patch wielding a whip. This is the type of movie where the New York Ninja writes “NY Ninja” on each individual throwing star, where a guy pulls a switchblade and shouts, “Switchblade!” and, upon meeting the titular character, a child asks, “Are you really the Ninja? Will you be my friend?” And of course, they become friends. John even takes the Dickensian street urchin spearfishing in the New York harbor wearing nothing but a bright red Speedo.

Every last choice the movie makes is totally off the wall—seriously, at one point the Ninja roller skates into battle. But as goofy and silly and more than occasionally disbelief-stretching as it is, there’s an earnestness and enthusiasm to the ineptitude. Sure, some of the fight choreography looks like it was done by a beginner karate class, but everyone sells out and buys in so hard it’s impossible not to get swept up in the fervor and utter doofus joy. 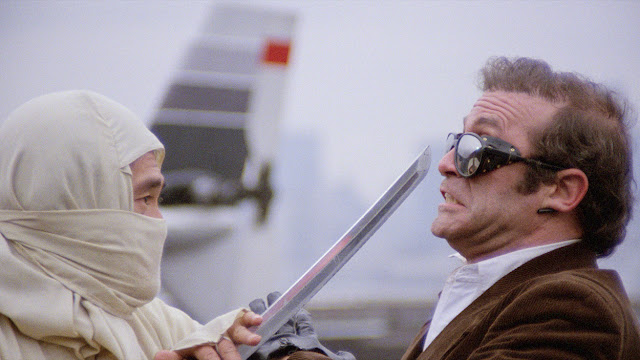 Vinegar Syndrome is releasing New York Ninja on 4K Blu-ray, and given their track record, it’s sure to be packed to overflowing with extras and goodies galore. The film will also roll out theatrically in early 2022. There’s truly not much that compares with New York Ninja, so if it pops up in your area, this is sure to be an absolute banger to witness with a, hopefully slightly intoxicated, crowd. [Grade: A]