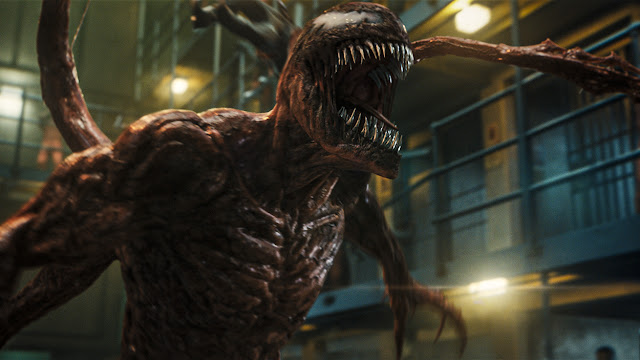 2018’s non-Marvel Marvel movie, Venom, is an odd beast. The movie isn’t particularly good. As a whole, it’s uninspired, messy, stuck in the late-1990s, and Sony’s legal inability to use Spider-Man, the titular antihero’s most notable nemesis, weighs on the film. But then there’s star Tom Hardy. Whatever movie he’s in, is a very different movie from everyone else. It’s basically Hardy arguing with himself for two hours, and it’s really damn entertaining in an unhinged, maybe he’s having an actual mental episode kind of way. Which brings us to the nigh-inevitable sequel, Venom: Let There Be Carnage.

Let There Be Carnage definitely steers into the skid. Helmed by Lord of the Rings mo-cap legend Andy Serkis, working from a script by Venom co-writer Kelly Marcel and story by Hardy, this time out everyone is in on the fun, everyone knows how silly whole thing is. In the comics, writer Todd McFarlane (Spawn) really crafted the snarky rogue persona most people associate with Venom. Which means it’s always had the sensation of being by and for stoned adolescent boys. Let There Be Carnage runs with that, and the result is by turns as fun and as exhausting as that can be. It’s also keeps up the rom-com bromance between a surly reporter and an alien symbiote, which is nice to see. This film is definitely an unusual mix of influences and genres, and again, sometimes that works, others not so much. 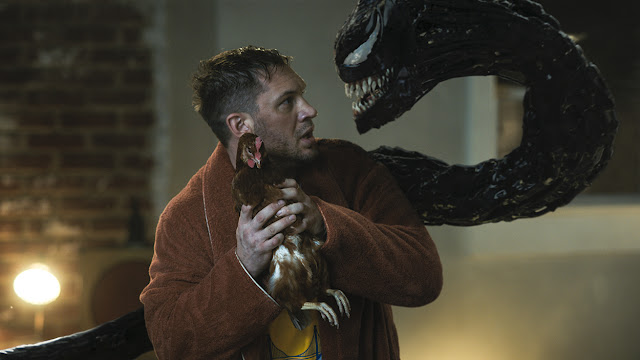 Since their first adventure, Eddie Brock (Hardy) and his many-teethed extraterrestrial passenger Venom (also Hardy) have figured out a way to coexist. It’s tumultuous, always teetering on the brink of disaster, but it plays out much like a mismatched roommate situation where Venom is the slovenly one who breaks everything and has no filter. Woody Harrelson plays Cletus Kasady, a death row serial killer who takes a shine to Eddie. Through events, he becomes Carnage, a red symbiote, and breaks out to rescue his girlfriend, Frances Barrison (Naomie Harris), also known as Shriek, because she has, well, a powerful shriek. Chaos ensues.

Let There Be Carnage doesn’t waste a lot of time…anywhere. Not with setup or backstory or character or motivation. This is a pared-down 90 minutes, including credits. Things just kind of happen. Eddie had something to do with Cletus being arrested. We never learn what, but for the sake of this current narrative, all we need to know is that they have a past. There’s also precious little information about things like Cletus and Frances’ bond. He was in a home for unwanted kids, other boys were mean to him, she saved him, they’re together. The whole movie is: here’s this fact, take it at face value, now go! Whereas most movies are too long, this could have used ten more minutes to develop literally anything. 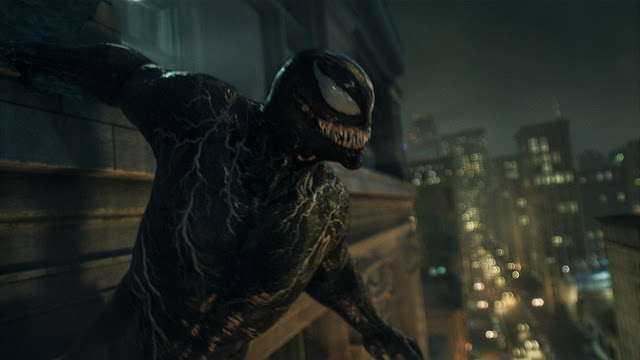 Harrelson has a fine time chewing scenery as Cletus/Carnage, spouting poetry and trying to be Eddie’s pal. Harris luxuriates in Shriek. There’s nothing to her character beyond snarling and screaming, but she also has a blast with that. In the first movie, Michelle Williams’ Anne serves as the foil/love interest for Eddie, playing it mostly straight, even though she does don the black, toothy symbiote exterior for a time. Here, however, she gets to let loose a bit more on her own. As does Reid Scott as her long-suffering fiancé Dr. Dan. Stephen Graham has the most thankless role as a generic hard-nosed detective. Even Peggy Lu’s bodega operator Mrs. Chen gets her moment in the sun.

But for everyone else, Let There Be Carnage is once again Tom Hardy’s movie. It loses some of the impact because we’ve seen it before, and because the surrounding film is more winking. Still, watching him walk down the street, arguing with himself, flinging himself around in wild, weird jerky motions, is the highlight of the movie. And, to be honest, the chief reason to watch this. Even if he comes nowhere near a lobster tank. When he’s on screen, it’s enough to distract from the paper thin plot and characters peopling the movie. At least in moments. Whenever we’re not with him, we’re waiting for his return. 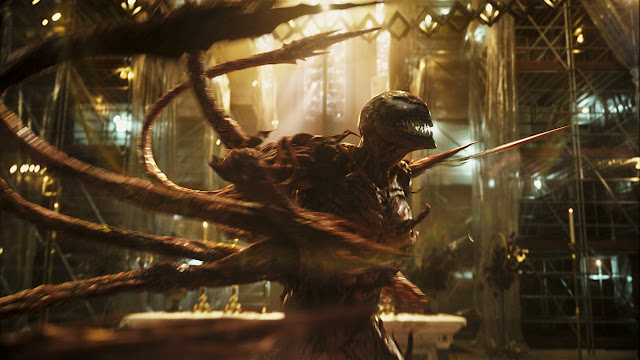 As far as action goes, this delivers what we’ve come to expect from big-budget studio superhero movies: big blobs of CGI goop, red and black, running into each other. It doesn’t look any better or worse than any other entries into these sweepstakes, but your enjoyment depends primarily on your tolerance for such things.

Overall, Venom: Let There Be Carnage is exactly the movie promised, by the previous chapter, by the comics, by ever clip and trailer. For good or ill. It largely maintains the bonkers energy of the first film, thanks primarily to Tom Hardy being a total weirdo. There’s plenty of juvenile humor, but not too puerile thanks to the PG-13 rating, which is also responsible for the bloodless, toothless violence. Honestly, you probably know whether or not this movie is for you. If you enjoy the first installment, or like the fact that Venom goes to a rave, this is for you. If not, maybe sit this one out. Either way, in the end, the real carnage was the friends we made along the way. [Grade: B-/C+, who even knows?]

working from a script by Venom

It definitely feels that way, doesn't it? (And that it's Hardy's idea.)