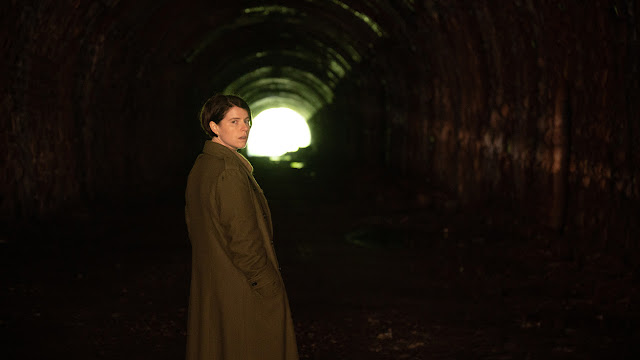 Alex Garland is one of those filmmakers who’s become a must-watch around these parts. His dreamy, weird, heady sci-fi stories are like freaking catnip. So, of course we’re excited for his latest, Men, and even though we don’t know much about it, this first teaser trailer offers a quick glimpse of just what we were looking for.

As we assumed, this Men trailer doesn’t offer much in the way of details, but it’s sure full of mood and tone and enough unsettling oddity to pique our interest. And that’s more than enough to keep us on the hook, and a big reason why this landed on our most-anticipated list for 2022.

And what perfect timing to drop this first look as star Jessie Buckley was just nominated for an Oscar for The Lost Daughter yesterday. How fortuitous, or do you think they planned it that way? Hmmm.

Both written and directed by Garland, the film also stars Rory Kinnear (Skyfall) and Jessie Paapa Essiedu (Gangs of London). Like, they’re the only other cast members currently listed. All in all, this appears to be a rather minimalistic affair.

In the aftermath of a personal tragedy, Harper (Jessie Buckley) retreats alone to the beautiful English countryside, hoping to have found a place to heal. But someone or something from the surrounding woods appears to be stalking her. What begins as simmering dread becomes a fully-formed nightmare, inhabited by her darkest memories and fears in visionary filmmaker Alex Garland's (Ex Machina, Annihilation) feverish, shape-shifting new horror film.

Again, that doesn’t clarify much, but we prefer it that way. The discovery is the fun part. But “simmering dread” and “fully-formed nightmare” are phrases we like to hear.

In post-production now, A24 is set to release Men sometime this year. When remains to be seen, but rest assured, dear reader, we’ll be all over that.

Posted by Brent McKnight at 6:24 AM