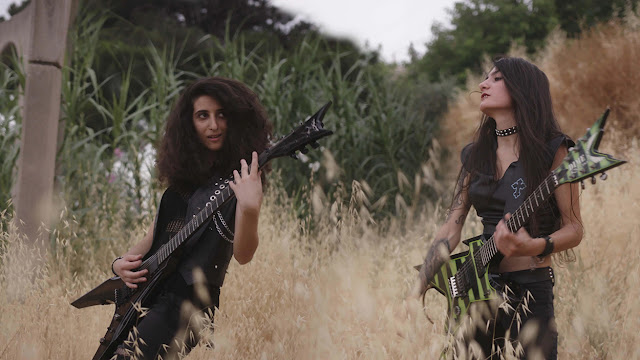 I’m a sucker for documentaries about punk, metal, or really any other musical genre popping up in places you don’t normally expect. Death Metal Angola, Los Ultimos Frikis, A Band Called Death, among others come to mind. Fitting nicely into this specific niche is Rita Baghdadi’s documentary Sirens, which chronicles Lebanon’s first all-female heavy metal band, Slave to Sirens.

The film primarily focuses on the two guitarists, Shery Bechara and Lilas Mayassi. The other three members, singer, drummer, bass player, are all there, but as far as the movie goes, fade into the background. There are band-centric struggles with which to contend. Like an invitation to play at Glastonbury that does not have quite the launching off effect they hope. (Anyone who has ever been in a band knows the elated excitement of a potentially huge show followed by the crushing sense of defeat when it doesn’t go down as anticipated.) Still, the core of Sirens is the relationship and conflict between Lilas and Shery and the world that surrounds them. It’s their film and their story. They clash musically, argue about the direction as of the band, and battle romantic friction, friendship, and burgeoning sexualities.

Beyond the confines of the band, they encounter a culture and political environment that’s not always the most welcoming for women in what’s typically a male dominated space, especially two openly gay women. Around them, pop culture cares much more about bubblegum bands than metal acts, and they’re met with continual familial pressure to conform to societal norms, fill prescribed roles, and do things they have no interest in, like find a man and have a family as they close in on 30.

Formally, Baghdadi drops the audience into the moment in and lets us soak it in. The camera places us in a fly-on-the-wall position, allowing us to watch, presenting as pure and unfettered a look into their lives as possible. The result offers a remarkably intimate, close-up portrait of two women fighting to find their way in a world increasing not designed for them. Often it feels as if we’re another member of the band or family, sitting in on a heated, uncomfortable conversation.

Setting colors everything about Sirens. So much is plays normal and mundane; these are the kinds of arguments every child has with their parents, or the squabbles every band encounters. But every once in a while, the film reminds of the reperceive political and social context in which these women live. In one striking moment, as the two chat on the street, Lilas recounts the events of a date the night before. Friends share moments like this all the time. As they ramble and laugh, a protest swarms up the street, surrounding and engulfing them. But they keep on their conversation without missing a beat, even as anti-government chants rain down around them. Until they, also without missing a beat, set aside the topic at hand and join the fray, shifting gears in an instant. It drives home the precarious nature of the lives they choose, and how we take for granted that no matter how much posturing and bluster we have many places in the world, there are as many others where choices we take for granted, like playing in a band or living as our authentic selves, carry potentially dire consequences.

One final note. I spent years in bands, playing shows, touring, driving 12 hours across the Midwest to play to three people in a basement, recording, bickering, and all the usual things that entails. On occasion, I wax nostalgic and think, “You know, me, I think we should start a band again.” And holy shit, this movie truly accentuates bad that idea is and how much I never want to do that again. No, just no. [Grade: A]