If you’ve spent any time on the road, you probably know highway rest stops can get weird. Sometimes very weird. What director Rebekah McKendry’s (All the Creatures Were Stirring) new movie Glorious supposes is, what if, instead of a weird rando on the other side of that roadside glory hole, it was something much darker, more sinister, and exponentially more powerful?

Based on a short-short story by Todd Rigney (Found), substantially reworked for the screen by Joshua Hull (Chopping Block) and David Ian McKendry (Psycho Granny), Glorious offers up a strange slice of cosmic horror that manages to be horrifying, funny, twisted, gooey, visually striking, and a total blast. It builds and subverts expectations, and winds up going to surprising places and in unanticipated, but wholly satisfying directions. And all of this in a 79-minute package with essentially one location and roughly half-a-dozen actors, one of whom only exists as a disembodied voice in a bathroom stall. 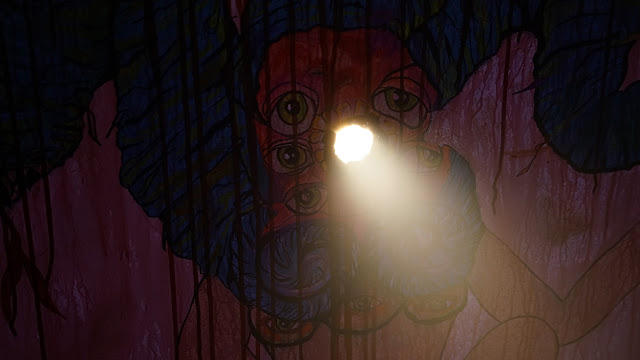 While dealing poorly with a breakup, Wes (Ryan Kwanten) winds up just driving. Maybe he has a destination, maybe not, it doesn’t matter. When the tired sets in, he pulls over at an isolated rest stop where he has a mental breakdown, a good drunk, and ends up trapped in the bathroom with only the voice of a mysterious figure in the next stall (J.K. Simmons) for company. And then shit gets weird, morphing from an uncomfortable encounter into a hallucinatory neon nightmare of epic proportions, with buckets of blood and viscera and the highest stakes imaginable.

Besides a few flashbacks and establishing scenes, most of Glorious goes down within the confines of that rest stop bathroom, and not a big one. This a rural, two-stalls-and-a-urinal job, not one of those sprawling, deluxe versions that get cleaned on the regular. (It reminds me of a very specific bathroom in a very specific park from my youth.) But even in those limits, McKendry and cinematographer David Matthews (Jakob’s Wife) keep the look and aesthetic interesting and off-kilter. They make use odd camera movements and unusual framing and angles, along with color scheme that juxtaposes shadowy black corners with near-phosphorescent pinks and purples. Despite the graffitied walls and urine and feces splotched floors, it’s a lovely film. 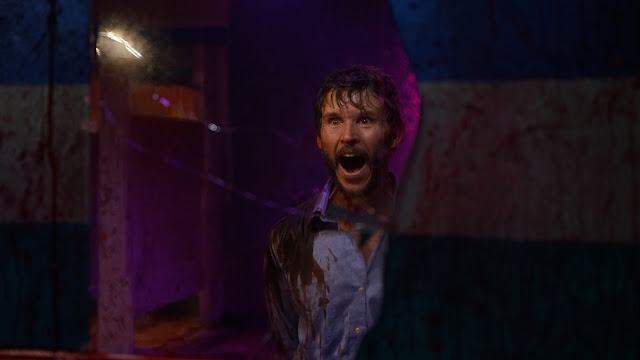 And while things never get dull on the visual side, Kwanten, who is more than game, pitches in with a captivating performance while mostly by himself in a room. He infuses Wes with an easily relatable sense of heartbroken desperation, which, as the film peels back the layers of his character, mutates and evolves into something much more complex as he grapples with new realities, major consequences, and his own demons. And again, the goo. So much goo. It makes Wes writhing on the filthy tiles even more stomach-churning in a nice bit physicality to balance out the more cerebral side. Which all builds up to a revelatory end—definitely earned and established, it’s still like, damn.

The idea of a gory, goop-drenched cosmic horror film about a sentient rest stop glory hole may sound ridiculous—and don’t worry, there’s also plenty of that—but with Glorious, Rebekah McKendry and company take that absurd concept and craft something smart and strange, compelling and propulsive, and not soon forgotten. It leaves a few lingering questions, but nothing to distract too much from the 79-minute ride of mesmerizing weirdness. [Grade: A]

Glorious world premiered at Fantasia 2022 and lands on Shudder in August.