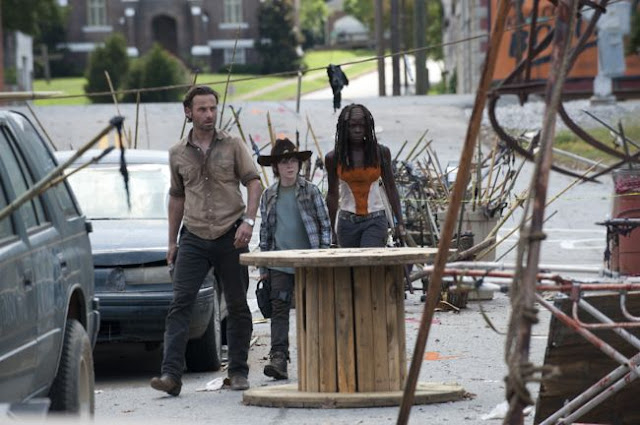 Last week’s episode of The Walking Dead, “I Ain’t a Judas,” set them up. Does this week’s chapter, “Clear,” knock ‘em down? We’re about to find out. Read more down below, and see if our opinions match, or if you feel like we were watching two completely different shows.

I’m not going to say that “Clear” is the best episode of The Walking Dead ever, but it’s the best in a long time. As a fan of Robert Kirkman’s comics, this comes pretty damn close to what I’ve always wanted the show to be. Tonally, the way the characters interact, and in regards to pacing, all the elements come together into one of the strongest episodes not only of this season, but of the entire series. It’s certainly some of the best storytelling we’ve seen in the series thus far.

I’m a huge fan of the way that this installment only tells one piece of the story. It doesn’t bounce around between the prison and Woodbury and the splinter group of Rick (Andrew Lincoln), Carl (Chandler Riggs), and Michonne (Danai Gurira), trying to work in a little bit from each individual thread. More often than not this leads to a scattered, fractured feel, but “Clear” is a long, gradual burn of a narrative, dropping hints and revealing secrets, and in the end, the characters have changed and wind up in a different place than where they began.

“Clear” also does one other thing that I’m pumped about: it gave Michonne an actual personality. I’ve been waiting for that since she first showed up in the season two finale, but I was beginning to worry they would never get around to developing her. For all intents and purposes, she’s been a functional mute, to the detriment of herself and the others.

Rick, Carl, and Michonne are out on a supply run. As we know from “I Ain’t a Judas” they’re looking for weapons to use in the escalating battle with the Governor (David Morrissey). Along the road they see a survivor, another living human being begging for their help, and they don’t even slow down. Hell, they don’t even consider it, though for a second you think maybe Michonne might run him down, just for kicks.

Ignoring another person like this offers a troubling look into the humanity of the group. They’ve become paranoid, hostile, and untrusting — for good reason, mind you — but they’re moving farther and farther beyond normal sympathy and compassion. They’re hard, getting harder, and eventually, the way they’re headed, they’re going to reach a point of no return, where they’re no longer capable of human emotion.

Even Carl doesn’t say anything. You can see that he wants to, but thinks better of it. The group has undergone a drastic shift in personality, not necessarily for the better. They’re becoming brutal, icy, and the deeper the change, the more prevalent that stance, the less likely they’ll ever be able to act like civilized people again. They’re in a dark place, and this encounter, or non-encounter, is indicative of a different kind of peril.

After the little band gets stuck in the mud, Rick and Carl almost have a nice father/son moment. I say almost because while Rick attempts to show his boy a handy-dandy survival tip—how to get a car unstuck from the mud—Carl blames his dad for getting stuck in the first place, and openly questions Rick’s decision to bring Michonne along on their run. Carl doesn’t trust her. Rick says he doesn’t trust her either, but they have a common interest, one that binds them together and makes them, not exactly friends, but at least cautious allies.

Their search for guns and ammo takes them back to the town where Rick and Carl lived before the dead began walking the earth. Someone has been busy, covering the walls with day-glo warnings like “Away With You” and setting up all manner of walker traps. As they go deeper, you start to get the feeling that Carl has an ulterior motive, his own goals for the trip, but at this point it’s more a feeling than anything concrete.

When they walk past a pile of burned corpses, they enter into what is best described as a gauntlet, where a sniper sets upon them, a sniper with a conveniently covered face. In the midst of all the chaos, when Rick is down to one last bullet, Carl steps in and saves the day, shooting the sniper. He’s become a stony little dude.

Their attacker happens to be wearing body armor, and when they pull of the mask, Scooby-Doo style, Rick is greeted by a familiar face. Turns out that the shooter is Morgan (Lennie James). Remember him from the first episode of the series? He saved a confused, just out of the hospital Rick, but not until after his son smacked Rick in the head with a shovel.

Morgan is the busy little bee that has been customizing the town. Dragging his unconscious body inside, they stumble across booby traps, trip wires, pits full of spikes, an axe just waiting to take your head off, and more fun little surprises. They look at him like he’s freaking nuts; I just think that he’s gotten pretty awesome.

Beyond the tricks and traps, Morgan has guns. All of the guns. He’s gathered everything that was left in the police arsenal, plus whatever he could scrounge from around town, and by the look of things, he has excellent scrounging skills. Michonne helps herself to some food while they wait, and when Rick confronts her, her response is, “The mat said welcome.” It most certainly did, though it was laid down over another booby trap.

Carl makes up an obviously fabricated excuse to leave, and Michonne goes with him, leaving Rick to hang out with Morgan, waiting for him to regain consciousness. As Rick relives the past, Morgan finally does wake up, but their reunion doesn’t go quite as he hoped. Morgan accuses his old friend of “wearing a dead man’s face,” and stabs him in the shoulder with a knife he had under the bed.

The two share one of the most honest emotional exchanges we’ve seen so far in The Walking Dead franchise. There’s been so much false emotion, so many sterile, manufactured moments in the series, that it is such a breath of fresh air to get a sincere, poignant, legitimately moving interaction. Losing his son, Duane—at the hands of his zombified wife, no less—is what really sent Morgan on a vacation to crazy town, a place Rick knows all too well. Gradual, deliberate, and perfectly placed, this may be my favorite communication in the series.

As Rick and Morgan get reacquainted, Carl and Michonne have their own adventure. Carl’s mission is to retrieve a photograph of his mother, Lori (Sarah Wayne Callies), so that Judith—AKA Lil’ Asskicker—knows what her mother looks like. He should really just ask Rick to snap a pic of her next time she appears to him in a vision, but maybe that wouldn’t translate into reality.

Since their house has burned down—something they learn from an elaborate map in Morgan’s lair—there is only one picture left in existence. This photograph just so happens to be hanging in a café…a café full of walkers. The two bond as they figure out a way to distract the walkers, get in, snag the picture, and get out. Michonne even picks up a little trinket for herself.

Through all of this, Michonne gets more lines than she’s had in all her previous episodes combined. I’m only sort of kidding about this; she is definitely at her most talkative. And guess what happens? It turns out that she has an actual personality lurking below all that hostility. Rather than just scowling, grunting, and generally not communicating at all, she talks, reveals personal details and feelings, and acts like a real goddamned human being for the first time. She keeps Carl’s secret, and even cracks a joke. A joke! Michonne! It’s pretty cool. As Carl tells Rick, she “might be one of us” after all.

Before they leave, Rick offers sanctuary to Morgan, a place in the prison with the group, but he is too far gone and opts to remain where he is. He has his own work to do.

On the way home you think that maybe they’ll see the hitchhiker from the beginning of the episode, and that maybe, this time, they’ll stop and lend a hand. They’ve come that far, all of them. The change is palpable, and they’re in a much different place emotionally than a mere 60 minutes ago. They do see him. And they do stop for him. But what they see are the scattered bits of his corpse, obviously torn asunder by biters, and what they stop for is his big orange backpack. Again, no one says a word.

One area where Kirkman’s comics are successful but the show often falters is in balancing the hopeless and the optimistic. As crushingly nihilistic as The Walking Dead can be at times, and as bleak as this last image is, you walk away from “Clear” with a feeling that resembles hope. They may be screwed, many of them may die in the impending confrontation with the Governor, the dead are still walking around like they own the place, and they’re going to have to do horrible things just to make it through. But maybe, just maybe, the survivors aren’t as far gone as you feared, and they’re still capable of feeling joy and pain and every other emotion that makes them human. When the episode started, you weren’t so sure about that.

I’m really, really curious what you though of “Clear”? In my opinion it’s one of the strongest episodes in the entire run of The Walking Dead. Do you agree, or am I way off base?