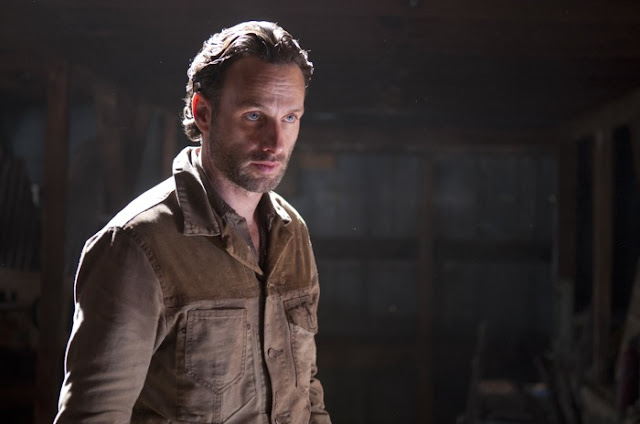 Last week’s episode of AMC’s The Walking Dead, “Clear,” was the best episode since “Pretty Much Dead Already,” and maybe since the pilot. Quiet, moving, hopeful, it represents the show at its peak. Can the follow up, “Arrow on the Doorpost,” live up to that high bar? Can it capitalize on the promise of its predecessor? Read on to find out.

The short answer to the question posed above is no, no it can’t. Not only does “Arrow on the Doorpost” fail to measure up, it’s a terrible, terrible episode. You only need to know a few things about this week’s Walking Dead, then you can skip the episode, stop reading this nonsense, and move on with your life.

By the end of the episode, Rick (Andrew Lincoln) is considering handing Michonne (Danai Gurira) over to the Governor (David Morrissey). The Governor says that if they turn over their sword-wielding compatriot, he’ll leave them alone to live in peace. Rick knows the offer is bullshit, the Governor knows the offer is bullshit, so why it’s even being considered is beyond me. The only other thing that’s different at the end of “Arrow” is that Glenn (Steven Yeun) and Maggie (Lauren Cohan) have made up, and Andrea (Laurie Holden) finally recognizes that her boyfriend is not a particularly nice guy.

At the beginning of the episode, the two groups—the survivors at the prison and the citizens of Woodbury—are on the brink of a violent, inevitable confrontation. When the end credits roll, they’re still in that exact same position. What falls in between is little more than a glorified staring match, and “Arrow” is nothing more than filler.

The main activity in “Arrow” is that Rick and the Governor finally come face to face. As the monarch of Woodbury says when the two meet up at an empty warehouse, “We have a lot to talk about.” That’s the understatement of the year. This should be a huge moment for The Walking Dead, where the two leaders come together, where two big personalities, two immovable objects collide. But the meeting—brokered by Andrea, always trying to play mediator—is just them lying to each other as they share a glass of whiskey, neither believing a word the other says.

Outside, Daryl (Norman Reedus) and Martinez (Jose Pablo Cantillo)—Rick and the Governor’s respective right hands—have a nice moment of tough guy bonding over a pack of cigarettes they pull off a dead walker. This just reaffirms that Daryl is the best character on the show. Martinez comments that all of this, the meeting, is a “song and dance,” and that, regardless of anything decided, they’re going after the prison.

For a moment, the briefest moment, you think something is going to happen, that the meeting might explode. When the Governor looks at Rick and says the only reason he came is to accept Rick’s unconditional surrender, you think, okay, the shit is about to hit the fan. At this point you’re about 25 minutes in, so there’s still plenty of time for the situation to escalate. And though there’s been a bit of pussyfooting around, you’re poised for movement.

Then there’s another 35 minutes of talking in circles. Really? After that there’s nothing more to talk about, right? The Governor just said, give up, or I’m going to kill you and everyone you know. When you play that card, what’s left to say?

Meanwhile, back at the prison, they’re preparing for war and Merle (Michael Rooker) is still an asshole. That’s the gist of the brief forays back into the yard. He tries to go after the Governor himself, Glenn steps up to stop him, they fight, the others break it up. There’s some talk about how crappy Merle is, but that he may be right, and maybe they should strike first. Not the first time this option has been raised.

At the end of “Arrow on the Doorpost,” everyone goes back to where they came from. Both sides know the two groups can’t exist side-by-side, and that war looms on the horizon. None of this is new information. You can skip this episode and, aside from Rick’s debate about handing over Michonne, you won’t miss anything.