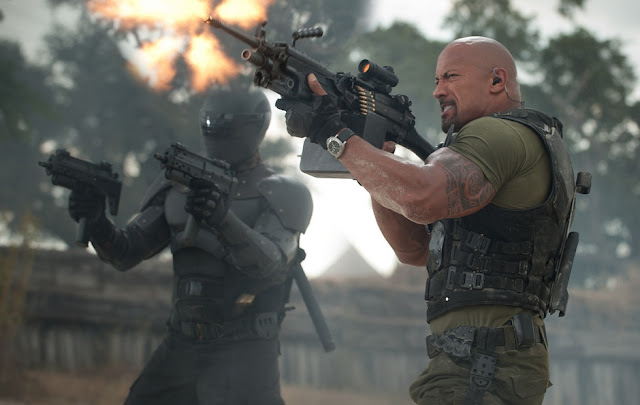 2009’s “GI Joe: Rise of Cobra” is almost universally considered to be a terrible pile of crap. While it definitely isn’t great cinematic art, I definitely enjoyed it way more than most. Despite a critical drubbing, the first installment managed to make money, so we now we get the inevitable sequel, “GI Joe: Retaliation.” In many ways part two is a more grounded, realistic action flick, but it is also still pretty damn entertaining. Big, dumb, loud, and completely forgettable, “Retaliation” is good for a couple hours worth of distraction.

You’re going to have to get through some gaping plot holes, and the movie is cheesy and silly at every stage, but if you can look past obvious flaws—and the pace does a nice job of not letting you dawdle—the result is ridiculous and a decent amount of fun. After all, this is a movie where one character keeps grenades in a fruit bowl, and ninjas do battle swinging from ropes high atop a remote mountain range. When Roadblock (Dwayne “The Rock” Johnson) and Firefly (Ray Stevenson) fistfight, both have a gun in each hand. “Retaliation” is a movie that makes the most absurd choice at every juncture. And that is mostly a good time.

The story is crappy and dumb, which isn’t entirely unexpected. Granted this is a movie based on a cartoon based on a comic book designed to sell toys to kids. If you forgot that fact, the giant, screen-wide Hasbro logo serves as a reminder. But that still doesn’t mean you should be able to get away with lazy writing for idiots. After the GI Joe team is sold out, betrayed by the imposter President of the United States (Jonathan Pryce), and left for dead, only three remain, Roadblock, Flint (D.J. Cotrona), and Lady Jaye (Adrianne Palicki). Snake Eyes (Ray Park) is still alive, too, but he’s got his own side story going on.

When the remnants of the crew set out to clear then names and exact a little revenge against the nefarious international terrorist organization Cobra, things just kind of happen, and a lot is taken for granted. Like the fact that three global fugitives without a friend or resource left in the world can just waltz back to the US from the middle of a Pakistani desert. And apparently it’s no sweat to get face time with high-ranking government officials, like say the Secretary of State, or even the President. You get that these are supposed to be the highest order of badass military operators, but it’s a stretch even for my flexible imagination that you can build a fancy enough computer out of parts found in an abandoned rec center in the ghetto that you can hack in and place yourself on a guest list to a presidential fundraiser. And again, remember that we’re also talking about international fugitives here.

Luckily director John Chu, most known for his “Fast and Furious” films, doesn’t allow for much down time to consider these sorts of logical leaps and chasms in the script. Johnson has enough screen presence to carry you along. In the early going he and Duke (Channing Tatum) have a nice homoerotic bromance going on—you see Roadblock’s kids, but his wife is nowhere to be seen, and the twin daughters do call him “uncle Duke”—and then later you just want to see him fire a big ass gun in slow motion. And like the first film, the Snake Eyes/Storm Shadow (Lee Byung-hun) fight is solid. That’s what happens when you have actors who actually know how to fight playing characters that are supposed to know how to fight; the fights actually look like two people fighting. Weird, huh?

In a grander sense, Cobra’s motivation is to control the entire world, a modest goal to be sure. However, in a more realistic sense, their driving force is nothing more than the desire to burn the constitution and blow things up. They do get points for having the balls to annihilate London with a newfangled weapon, and there’s an infectious giddiness as they bring the world to the brink of nuclear apocalypse. When talking about global domination, the bad guys manage to quote both Tears for Fears—“Everybody wants to rule the world”—and Queen—“I want it all”—which is pretty funny.

“GI Joe: Retaliation” is one of those movies where the scale is grand enough that random famous people just pop in for a little bit to hang out. Walton Goggins has a small, but fantastic turn as the warden of a clandestine East German supermax prison. RZA, the mastermind behind the Wu-Tang Clan and “Man With the Iron Fists,” plays, of all things, a wise old blind sensei. Bruce Willis shows up as the original GI Joe, mostly to toss in smartass quips here and there, collect a paycheck without doing any real work, and shoot a bunch of Cobra guards out of the back of a moving El Camino.

Escapist eye candy to the core, I can easily see you adoring or despising this film, depending on your mood and sensibilities. Watching this does feel remarkably like watching an episode of the cartoon, in both good and bad ways. Exactly what you expect, and exactly what trailers make it look like, “GI Joe: Retaliation” is a lot like running around outside, throwing your favorite toys, pretending to be an army man.
Posted by Brent McKnight at 4:46 PM

Superb action movie after long days with good screenplay & excellent Direction ! a lot of thrill too to enjoy the movie !