As a small child I used to accompany my parents on regular treks to the local video store, which oddly enough also served as an ice cream shop. On every run I invariable wandered into the horror section and proceeded to scare the living shit out of myself by gawking at all the gruesome box covers and reading the horrific descriptions on the back.

Never one to have nightmares, or at least to remember them, my dreams have always eluded me, leaving little more than a lingering feeling after the fact. These cardboard covered rectangles—in my memory the VHS boxes were worn and dusty even with the format in its heyday—did however make it difficult to get to sleep as I imagined stalkers, killers, and monsters of all types creeping up the stairs. In retrospect, this likely has something to do with a lifetime of insomnia, as well as a morbid leaning towards all things horror.

One image in particular still lingers in my memory to this day, the cover on the box of Wes Craven’s 80s slasher classic, “A Nightmare on Elm Street.” The image is of star Heather Langenkamp laying in her bed, as Freddy Krueger’s clawed hand looms above.

This particular franchise, along with “Friday the 13th,” symbolizes horror as a genre for me. Later I learned to love John Carpenter’s “Halloween” films, “The Exorcist,” Mario Bava and the Italians, and so many more, but the “Elm Street” films, even before I actually ever laid eyes on them, served as a gateway. And now seven, count them, seven of the “Elm Street” movies are available via a nice looking Blu-ray box set.

By the time I finally sat down to watch the 1984 original, Freddy Kruegar was already a familiar face on the pop culture landscape. I borrowed a grainy VHS tape—pirated in that time tested manner of recording form one VCR deck to another—from a friend, the same friend I would later borrow all of the “Child’s Play” films from. That Friday night in my second grade year, I only made it a few minutes into the movie. I got as far as Tina (Amanda Wyss) flailing up the wall and spinning on the ceiling, being sliced and diced by an invisible hand as her boyfriend Rod (Jsu Garcia) can only watch in impotence, where just a few moments earlier he was the virile master of his domain.

As terrifying as that was, the idea of sinister forces invading the landscape of your dreams, the next morning I did make it all the way to the end credits. Through a young Johnny Depp being turned into a blood geyser, through the nightmares, through Nancy’s (Langenkamp) dream battle with the diabolical burn victim—all in the safety of Saturday afternoon sunlight.

Like so many horror franchises, it is the first movie in the family line that is the true classic, followed by a string of inbred siblings and cousins, and the level of quality declines as the numbers after the title increase. Even as spooky, original, and atmospheric as “A Nightmare on Elm Street” is, it doesn’t hold up as well as genre brethren “Halloween” and “Friday the 13th.” The prosthetic effects, once so horrific, come across as fake and hokey, and Freddy’s signature one-liners are like dated comic book quips. As fun as it is to re-watch, and as good as the movie looks on Blu-ray, it’s difficult to imagine many new fans being turned on to the series. Nostalgic horror aficionados, however, are a different story, and will revel in the sharp detail as Freddy’s face pushes through walls and into your dreams. Still, as ridiculous as some of the subsequent chapters are, their gratuitous nature and the inherent camp make them a damn fine movie watching experience.

While there is a definite sexual subtext to the first film, “A Nightmare on Elm Street 2: Freddy’s Revenge” puts that shit on full frontal display. The overt homoeroticism of chapter two—leather bars, nude shower whipping, bro sleepovers—has led to a cult standing in certain segments of the gay community. Too bad the movie isn’t better. With little touches like “Fu Man-Chew” cereal, and lines like, “You’ve got the body, I’ve got the brains”—after which Freddy peels off the top of his skull—this is full blown camp.

When Jesse Walsh (Mark Patton) moves into Nancy’s old house on Elm Street—never move into the murder house—and finds her diary, Freddy returns to possess the awkward teen, and infest his dreams with subpar monster animals like rats, cats, and Rottweilers. One of the weakest installments in the family, “Freddy’s Revenge” takes the best part of the mythos, Freddy’s ability to invade your dreams, and brings the killer into the real world, which is definitely the biggest misstep in the series.

Where part two falters, “A Nightmare on Elm Street 3: Dream Warriors” steps up. 80s rockers Dokken deliver a kickass, fist-pumping theme song, and the kids of Elm Street take a more proactive approach to Freddy’s subconscious incursions. Nancy is back a psychology grad student, specializing in sleep disorders, and leads a group of teenage psych ward inmates into a dream battle with the child murderer.

Maybe the strongest sequel, “Dream Warriors” returns the horror to the unconscious realm, where Freddy belongs. It also brings in some religious imagery for good measure, introduces us to Hypnocil, a recurring element in the films, and sheds some light into the shadowy past of Frederick Charles Kruegar. Freddy also uses a victim’s ligaments and tendons to walk him around like a bloody marionette, and there’s a kickass, “Army of Darkness” like skeleton fight.

Renny Harlin (Die Hard 2) takes up the reigns for “The Dream Master,” which picks up with the kids from “Dream Warriors.” As her friends are killed off one by one, Alice (Lisa Wilcox) gathers pieces of their personalities, their powers and strengths, to use in the fight against Freddy. There’s karate, super dream strength, and a pizza with little screaming heads instead of pepperoni.

Next up on the docket is “A Nightmare on Elm Street 5: The Dream Child.” Let’s just call it something to behold. In this installment, Freddy invades the dreams of a fetus. Following “Dream Child” is the first non-numbered entry into the canon, “Freddy’s Dead: The Final Nightmare.” Here we learn that Freddy is a daddy, and a really crappy one at that, since he haunts the dreams of his daughter and generally messes with her life. It’s safe to say that Freddy Krueger is not winning any father of the year awards anytime soon.

Horror movies have taught us many things—think back to the earlier lesson about murder houses—but chief among them is that when the title of a movie features words like “last,” “final,” “end,” or any other that implies finality, we can definitely expect to see more films in the not-so-distant future. Case in point, in the wake of “The Final Nightmare,” audiences were treated to the meta-sequel, “Wes Craven’s New Nightmare.” Somehow, someway, Freddy has figured out how to breach the bounds of film and imagination, and come after actress Heather Langenkamp, played by actress Heather Langenkamp, in the real world. And her dreams. But her dreams in the real world.

Though you get seven “Nightmare on Elm Street” movies in this collection, there is one glaring omission. There’s no “Freddy vs. Jason,” Ronnie Yu’s 2003 crossover with “Friday the 13th.” The absence is a legal issue, one involving rights, ownership, and a variety of technical mumbo jumbo that boils down, in the end, to dollars and cents. Still, this collection feels incomplete without it, like there is simply something missing.

That said, the Blu-ray “A Nightmare on Elm Street Collection” is an awesome parcel, and a comprehensive accumulation of bonus material. While the packaging is generic and not particularly interesting, there’s a ton of content. Each individual film comes with a collection of extras. The first film has the most, by far—including multiple commentaries, alternate scenes and endings, extensive featurettes, and “Never Sleep Again,” an exhaustive making-of documentary—but the others also arrive with their own behind the scenes videos, interviews, music videos, trailers, and more.

Then there is an entirely separate disc that includes more than three additional hours of extras. You get two episodes of the short-lived TV series “Freddy’s Nightmares, and a pair of featurette galleries. However, the jewel in this crown is the new 30-minute retrospective “Fear Himself: The Life and Crimes of Freddy Krueger.” This documentary includes interviews with writers, directors, actors, people involved in every aspect of production, and even some well known film critics. 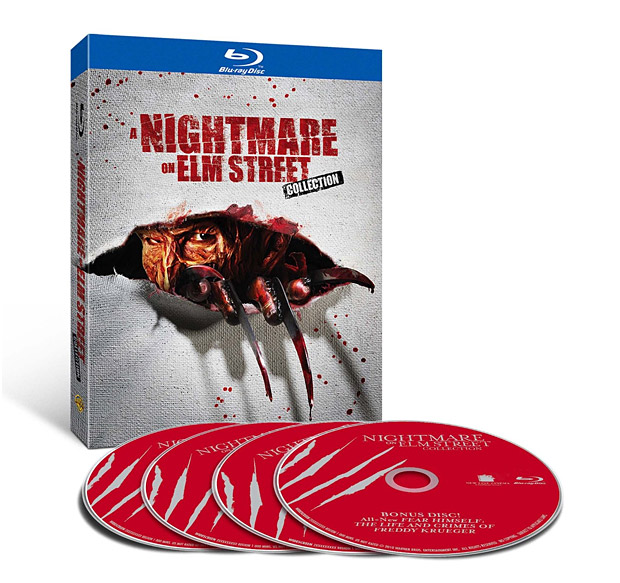