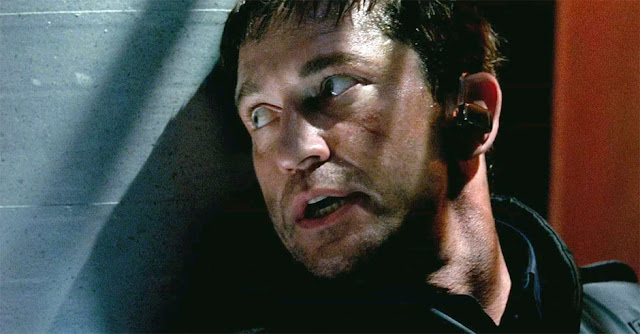 Early on in director Antoine Fuqua’s actioner “Olympus Has Fallen,” disgraced secret service agent Mike Banning’s (Gerard Butler) wife makes him a thick, milky smoothie for breakfast. This particular morning drink serves as an effective metaphor for the entire film, which is like the producers threw “Die Hard” into a blender with “Under Siege,” hit puree, and projected the resultant lumpy goo onto a movie screen. I don’t even mean this as hyperbole. Going through “Olympus Has Fallen” you can label each scene as straight up lifted from one of those iconic films. The movie is a gross, lumpy action smoothie.

After Banning lets the First Lady die in a tragic winter traffic accident, he’s reassigned to a desk job, though he wants nothing more than the chance to get back in the Presidential protection saddle. He gets his moment when an uppity North Korean terrorist cell takes over the Whitehouse and kidnaps the Commander in Chief, President Asher (Aaron Eckhart). Because he’s badass, and the only guy left alive after the invasion, Banning gets the opportunity to save the day.

This basic premise—one guy alone in a building against a slew of heavily armed international baddies—is pure “Die Hard.” And lets be honest, “Under Siege” is really “Die Hard” on a boat. The scenes where Banning talks to a roomful of government officials and military advisors, however, are 100% “Under Siege.” Much like Steven Seagal running around a battleship, Banning also has to look after an innocent. Instead of a stripper, in this scenario it’s the president’s son, who has a weirdly close relationship with his former bodyguard—you expect the boy to call Banning “uncle Mike” at any moment. A stripper would have been way more fun.

Borrowing from earlier movies like this would be well and fine and good—after all, “Die Hard” and “Under Siege” are two of my favorite action movies of all time—if only everything else about “Olympus Has Fallen” wasn’t half-assed. The action is choppy and jumbled, and while there are a handful of solid moments, most of the hand-to-hand combat are shot from the waist up and so over edited that you have no idea what’s going on. It’s like punch, edit, reaction, edit, kick, edit, counter, edit, punch, edit, and on and on. Maybe I’m asking too much, but I miss the days when a fight scene actually looked like people fighting instead of a cobbled together slap fight.

And even if the action wasn’t subpar, the writing would still be lazy as shit. The script feels like writers Creighton Rothenberger and Katrin Benedikt got their hands on one of those “Idiot’s Guide to…” books about screenwriting and went for it. Early in “Olympus Has Fallen” the film is crammed with obvious attempts to exploit your memories of 9/11. A plane flying into the Washington Monument looks eerily similar to footage of the Twin Towers that day, and is heavy-handed emotional blackmail in lieu of actually doing the work to make you care about anything on screen. You just might want to slap the people responsible. And surely I won’t be the only one to notice the irony of a rah-rah, flag-waving patriotic movie—the first and last thing you see are poorly rendered CGI American flags—starring a guy from Scotland, right?

Keeping in the theme of not actually putting any thought into the script, “Olympus” is fond of writing things on screen so they don’t have waste any effort creating characters or telling you where you are. For example, hey, there’s Morgan Freeman, I wonder what he’s doing here. Oh, look, if you can read, now you know that he’s the Speaker of the House, and no one had to worry about how to introduce him. With all of this free time, they get to concentrate on giving Banning more witty one-liners like, “I’m going to stick my knife through your brain.” And of course there’s a scene between the obligatory treacherous turncoat and Banning, the “I didn’t tell you that…” moment, where he knows this guy is a dick.

This is really a case of good actors doing absolutely nothing with very little to start out with. Freeman, Butler, and Eckhart sleepwalk through their roles. Melissa Leo’s performance is mostly overwrought writhing and gurgling sounds, Robert Forster is pointless, and Rick Yune’s villain is boring. You can’t help but think that everyone involved—from the cast and crew all the way up through the studio—is out for a quick payday so they can go on about their lives. No one strained themselves on this movie, and no one really seems to be trying. “Olympus Has Fallen” is an easy movie that just plopped out of the studio and isn’t particularly worth paying attention to.
Posted by Brent McKnight at 5:01 PM