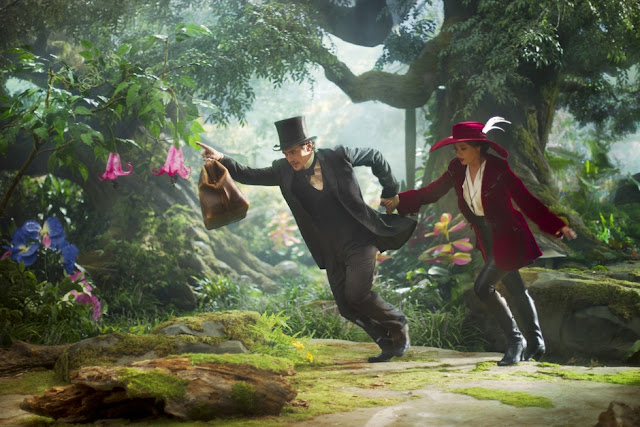 At one point, near the end of “Oz the Great and Powerful,” Theodora, played by Mila Kunis in green face, makes an exasperated noise and utters, “How predictable.” Those two words are a good summation of the entire movie. There’s nothing particularly wrong with the film, but there’s nothing especially original or engaging about the story either. Obvious kiddie fare, an audience that will likely thrill in the dazzling color and shit the bed at the sight of the flying baboons, the story is so watered down and transparent that sitting through it as a grown-ass adult can be trying. Why this is more than two hours long is beyond me.

Director Sam Raimi (“Evil Dead”) has a blast playing with the 3D, staging elaborate sets and manipulating the depth of field. The Land of Oz is an over-the-top cartoon creation that really is quite breathtaking—it looks practically painted. This visual realm is where “Oz” shines the brightest. Not normally a fan of 3D in most cases, this is one instance where I think the technology is definitely worth it. Costumes and sets are elaborate and inventive, but it’s too bad that innovation doesn’t carry over to the story. Based on the novels of L. Frank Baum, which lie in the public domain at this stage in the game, “Oz the Great and Powerful” is not, I repeat not related to the MGM classic “The Wizard of Oz,” at least not in a legal sense.

James Franco plays Oscar, casually called Oz by most of his compatriots—not his friends, mind you, he doesn’t have any of those. A fast-talking carnival magician, Oz is a shyster, a charlatan, a phony in every sense of the word. Franco is an ideal choice for this part, as the role meshes perfectly with his aesthetic and overall chintzy bravado. Half the reason why I like the guy as much as I do is because when you watch him do, well, anything, you get the distinct impression that he’s pulling one over and you and the entire world, and that he’s having a damn fine time doing it. His entire career feels like a con. If he wasn’t so likable, “Oz the Great and Powerful” would fall flat on it’s face.

Throughout the film, the script just keeps driving home the point that Oz really is a good man underneath all of his flaws. You agree from the first time you meet him, but they just won’t let up. Oz cultivates a sense belief in others, though he is never able to feel the same way about himself. As Glinda (Michelle Williams) says, he may not be the wizard they thought, but he’s the wizard they have, and maybe the wizard the need. That’s the oversimplified message of the movie, believe in yourself and others will believe in you, too. Not a bad theme, just a little easy.

Oz’s life sucks. The carnival bounces from town to town, the woman of his dreams is marrying another man, and the jealous strongman husband of a woman he seduced through less than honest means wants to smash his head in. No wonder he doesn’t pause for a second before taking off in a hot air balloon and leaving it all behind. But hey, look, there’s a tornado. Guess where that’s going to take him? After a badass bout with the twister, Oz, and you the viewer, finds himself transported from the black-and-white boredom of Kansas—full of good men, while Oz wants to be a great man—to the full blown Technicolor playground that is the land called Oz.

From there Oz meets Theodora, then a naïve young witch struggling with her own internal wickedness. She informs him, right before he seduces her—she’s never heard a pickup line in her life—of the prophecy that a great wizard bearing the name of their land would come and free the people from the tyranny of the Wicked Witch. And become king. That part, along with the inherent spoils of the job—Oz has an awesome Scrooge McDuck moment—is what really piques his interest.

Eventually he becomes embroiled in the high-tension world of witchy politics with Theodora, her sister Evanora (Rachel Weisz), and Glinda. Things aren’t always what they seem on the surface, not everyone is as forthcoming and truthful as they could be, Oz’s reckless ways lead to hurt feelings and broken hearts, and there’s Zach Braff as an adorable winged-monkey. Walking away from “Oz the Great and Powerful” I made the executive decision that from here on out I will only watch Zach Braff in movies where he plays a monkey, CGI or otherwise.

In a funny way I almost feel bad because I don’t enjoy “Oz the Great and Powerful” more than I do. But despite an upside and a whole mess of pretty pictures—the climax is especially stunning—the pace drags in an overlong middle act, you never get anything deeper than the easiest possible answers, and, as the movie progresses and the carefully crafted veneers of the witches starts to crack, the quality of the acting takes a drastic nose dive. I can’t tell of Kunis is perfect or terrible in her transformation from one personality to another.

We’re talking about a family film that will likely frighten the younger and more sensitive members of your clan. Like I said earlier, there’s nothing particularly wrong here, but the finished product, though slick and visibly appealing, is empty, vapid, and could have been so much more. “Oz the Great and Powerful” is worth seeing in the theater, if only for the sake of the spectacle, but this isn’t a film that we’ll be talking about much in the future.
Posted by Brent McKnight at 3:42 PM

Though I still enjoyed it in the end and it's not terrible, it just has too many frustrating aspects which all stem from a messy script. That’s okay though, especially since I had a good time at the end of the day. Great review Brent.

The film is a visual marvel, i felt like i was in heaven while watching the breathtaking scenes . it takes your imagination to unexplored depths. Brilliant use of technology.