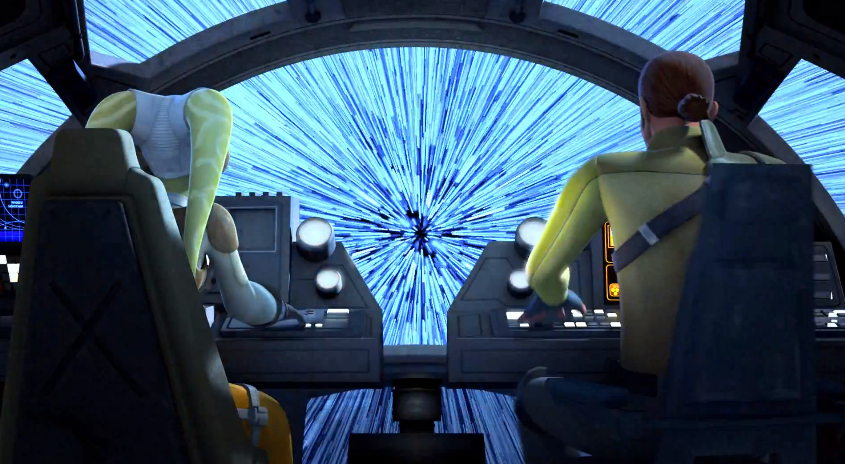 It’s that time. We finally have our first addition to the Star Wars canon in the Disney-owned Lucasfilm era, with the animated series Star Wars Rebels. The premiere episode, “Spark of Rebellion,” recently debuted, and it’s a damn good time, setting the stage for a series that looks to be a ton of fun. Definitely aimed at kids, but never in the cheap, cloying way that George Lucas’ prequels were, kids are absolutely going to flip their wigs over this, but at the same time there’s more than enough here to keep you interested and watching right along with them. It isn’t the movies we’ve been waiting for, but it just might tide you over until Episode VII drops next December.

Rebels is far more in line with the original trilogy than the much maligned Episodes I, II, and III, thankfully. More than anything else, this has the look and feel that you love so much about Star Wars in the first place. There’s that sense of the swashbuckling action that Lucas originally lifted from the movie serials of his youth, and high adventure is definitely the order of the day. It’s hard not to grin like an idiot as the characters battle with dimwitted stormtroopers and dodge Imperial forces. There are TIE Fighters, Star Destroyers, lightsabers, and the fact that they use John Williams’ trademark score only drives home the fact that you’re watching NEW FREAKIN’ STAR WARS.

Set in between the events of Revenge of the Sith and A New Hopes, Rebels shows a world where the Galactic Empire is tightening its oppressive grip on the galaxy, specifically the outer rim planets, like the small, backwater world of Lothal. In this tyrannical environment, pockets of rebellion flourish, and you see the seeds of what will ultimately become the Rebel Alliance.

“Spark” starts off with a big action scene, most of which we’ve already seen courtesy of an extended clip released a while back, but that doesn’t make it any less of a blast. Ezra Bridger is an orphan, a loner, a smalltime con artist who, though he has no love for the Empire and is fond of ripping them off when the opportunity arises, only cares about his own survival. When he tries to jack a mystery shipment from some Imperial goons, he crosses paths with another group trying to do the same thing, but with drastically different motives. This crew includes the Jedi leader Kanan; explosives expert Mandalorian Sabine, who also has an artistic side; gruff, tough muscle Zeb; nerves-of-steel pilot Hera; and sassy little astromech Chopper. They’re on a mission of more overt rebellion and resistance, and as Ezra gradually gets absorbed into the group, this band forms the center of Rebels.

I’m still not a big fan of the character design, though the rest of the world they’ve created looks fantastic and spot on. Kanan comes across as a little bland (to be honest, Obi-Wan comes across much the same way), but Ezra has the makings of a strong lead, mixing the best qualities of both Luke and Han. He’s a small town (planet) Skywalker type who dreams of something much grander—he’s also strong, but untrained in the ways of the Force—but he’s got a serious Solo swagger. When he first shows up, he’s got that veneer of out-for-number-one, but you can tell right away that his tough exterior, a survival tool he’s developed, hides something nobler, something that may even surprise himself. And as he accompanies the rebels on their missions, including delivering food to the starving residents of a shantytown/refugee camp, you can tell the selfless outweighs the selfish, and his reluctant hero bit won’t be reluctant for long.

At the advanced screening I saw, every child in the audience was dead quiet, leaning forward in their seats, totally engrossed by what they saw on screen. Given the obvious target audience, you know better than to expect anything particularly sophisticated or subtle—this is the kind of thing where the dialogue is very obvious and everything is spelled out in explicit terms—but it is never dull or boring. While there are some overly hokey bits, like overt references to the titles of multiple Star Wars movies, you’re never far removed from a fast, exciting action scene, and any bumps are easily forgiven. A zero gravity sequence is an especially fun moment.

“Spark of Rebellion” is very much the first chapter, very much setting the stage for the episodes to follow. You learn about the state of the world, meet the main characters, and see how things are going to operate moving forward. Cameos and references connect the material to the larger Star Wars universe, and you get to meet the two main villains. Imperial lackey Agent Kallus will be the more week-to-week enemy they face off with on a regular basis, while you get he impression that the Inquisitor, who only shows up briefly here, will serve more as a larger, big picture enemy, kind of like Thanos in the Marvel movies. He may not show up in every episode, but his presence and shadow loom over everything else.

Not perfect by any means, there is certainly more than enough in Star Wars Rebels to keep you tuning in from week to week, especially knowing in advance that things we see and experience here will continue to show up in the new movies as the universe expands. Fun and action packed, Rebels captures the spirit of the original trilogy and reminds you of just why you love those movies so damn much in the first place. After watching “Spark of Rebellion” I was subsequently bummed out to learn that I don’t get Disney XD at home, so I’m going to have to find another way to tune in and watch these episodes, and it’ll be worth the effort.