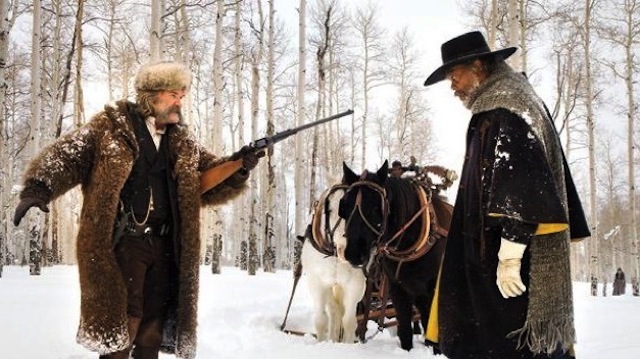 Any time Quentin Tarantino drops a new movie, it’s going to be a big deal. That much is a given. When it’s a western with a stacked cast, like his upcoming The Hateful Eight, well, to say we’re excited is an understatement. We’ve seen photos and random whatnots from the film, but now we have our first trailer, and it looks like a damn fine time.

First off, it gorgeous looking, and Tarantino certainly puts the 70mm presentation to good use, and, at least visually, this hearkens back to the sweeping, epic westerns of days past. True to form, he populates The Hateful Eight with a mixture of his standard reparatory players and folks you haven’t seen in a while (I can’t explain how much I love that Bruce Dern is in this movie).

There’s snappy dialogue, tense standoffs, affectations that only Tarantino can pull off, a twisted sense of humor (that hangman gag), and grim characters who reside in morally ambiguous territory. Here’s a synopsis:

In THE HATEFUL EIGHT, set six or eight or twelve years after the Civil War, a stagecoach hurtles through the wintry Wyoming landscape. The passengers, bounty hunter John Ruth (Russell) and his fugitive Daisy Domergue (Leigh), race towards the town of Red Rock where Ruth, known in these parts as “The Hangman,” will bring Domergue to justice. Along the road, they encounter two strangers: Major Marquis Warren (Jackson), a black former union soldier turned infamous bounty hunter, and Chris Mannix (Goggins), a southern renegade who claims to be the town’s new Sheriff. Losing their lead on the blizzard, Ruth, Domergue, Warren and Mannix seek refuge at Minnie's Haberdashery, a stagecoach stopover on a mountain pass. When they arrive at Minnie’s, they are greeted not by the proprietor but by four unfamiliar faces. Bob (Bichir), who’s taking care of Minnie’s while she’s visiting her mother, is holed up with Oswaldo Mobray (Roth), the hangman of Red Rock, cow-puncher Joe Gage (Madsen), and Confederate General Sanford Smithers (Dern). As the storm overtakes the mountainside stopover, our eight travelers come to learn they may not make it to Red Rock after all…

The Hateful Eight opens Christmas Day, and, after you’ve seen Star Wars: The Force Awakens a few times, this will make a fantastic double feature with The Revenant. Check out the trailer below.

Posted by Brent McKnight at 6:39 PM