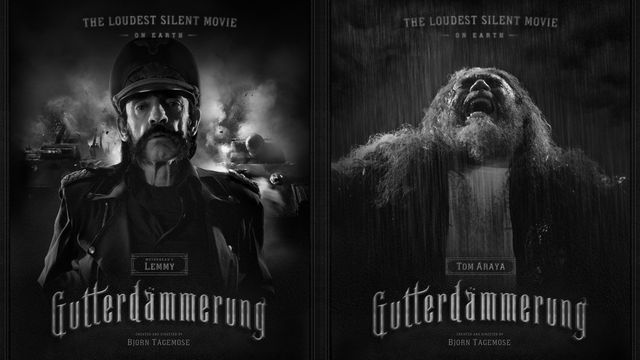 The German movie Gutterdämmerung is being billed as “the loudest silent movie on Earth,” and the batshit crazy sounding supernatural western fairy tale—yes, you read that right—just got way louder, adding Lemmy Kilmister from Motörhead and Tom Araya from Slayer.

According to a press release, the two heavy metal legends join a cast that already includes Iggy Pop, Henry Rollins, Grace Jones, and some dude from that Eagles of Death Metal band. A while back, director Björn Tagemose promised even more notable additions to the cast, and Lemmy and Araya are certainly that.

Lemmy is set to play “a crazed general” who leads something called the “Armour Cavalry,” and while I have no idea what that means, I can’t wait to find out. Araya takes the role of “a mysterious messenger of darkness” who is, ironically, “bringing the light.” Again, no clue, but that sounds just nuts enough to work.

If those roles sound insane, just wait until you hear about the rest of the plot; it gets even better. Gutterdämmerung is set in a world where God has rid existence of all sin by swiping an evil guitar from Satan. When Iggy Pop’s character, an angel known by the most unangelic name of Vicious, gets bored, he drops the sinister instrument to Earth, kicking off a whole new run of mayhem, chaos, depravity, and wickedness of the highest order. That sounds like a damn fine time to me.

As it’s a silent movie, which only ups the weirdness a few degrees, Gutterdämmerung is going to tour with a live band and a narrator. Supposedly this start later this year and continues into 2016. Fingers crossed that it comes stateside, because this is the most metal thing I’ve ever heard of.