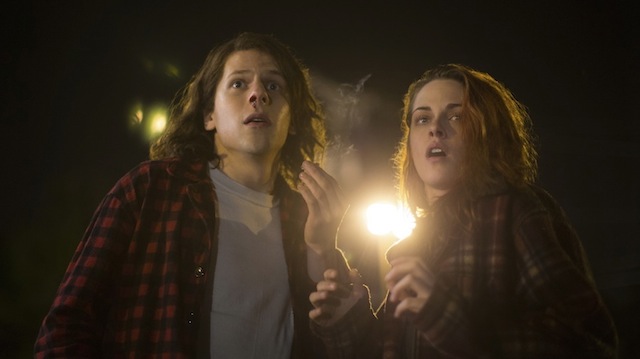 Under normal circumstances, I hate calling a movie an interesting failure, but in the case of director Nima Nourizadeh’s American Ultra, that’s the most apt description I can conjure. There’s a kernel of a clever idea here, as well as a few bits worth closer examination, but it feels like its stoner protagonist wrote the movie, and continually misses opportunities to satirize and the sleeper agent spy films like the Bourne franchise, like it obviously wants, and develop into anything more than a string of scenes someone thought would be awesome.

Written by Max Landis (Chronicle), American Ultra gets points for trying to combine disparate subgenres, but while it has its moments, the film never coalesces into anything more. Think Half Baked meets Oldboy—there’s a brutal tool fight—and you’re close, but the end result is just as jarring and mismatched as that sounds. It could have pushed beyond the boundaries of over the top, into gloriously absurd territory, only it doesn’t.

The plot revolves around Mike Howell (Jesse Eisenberg), a well-meaning stoner who works a dead end job at a convenience store; has a loving, devoted, girlfriend named Phoebe (Kristen Stewart); and battles deep-seated anxiety issues. Oh yeah, he’s also a secret sleeper agent for the CIA, and when his existence is deemed a liability, he’s targeted for extermination. But he has crazy fighting skills ingrained into his psyche, so he can kill people with spoons, dustpans, cup-o-noodles, and basically anything he finds lying around.

What follows is a manic mixture of comedy and action as Mike and Phoebe attempt to escape from their small town and occasionally dispatch hordes of government agents sent to stop them. While there are certainly moments that are a total blast to watch—Eisenberg is clearly having a lot of fun, when else is he going to get to play the badass killing machine?—nothing is ever developed in any depth at all. 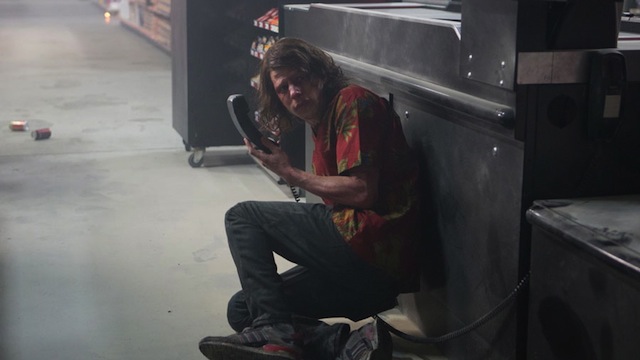 Mike is just this stoner guy who wants to hang out with his girlfriend and draw cartoons about monkeys. When he is first activated and kills a guy with a spoon, he freaks out, but beyond that dalliance, he never deals with the fact that he’s a trained killer, which is an interesting avenue that could add depth to both the character and the film. Instead, the script skips over that in favor of stylized scenes trapped in John Leguizamo’s black-light-nightmare basement, embryonic side plots that hint at a greater story but never come to fruition, and regular plot twists that are telegraphed well in advance.

The juxtaposition of the humor and the action is problematic. On one hand, you have light, what-do-we-do-Scooby (Mike is basically Shaggy) fish-out-of-water hijinks. But this is matched with violence that is often unsettling and startling in its viciousness. I’m no dainty flower when it comes to cinematic brutality, but the two simply don’t fit together in this instance, and will leaves some viewers queasy. This is obviously the intention of the filmmakers, but with no greater purpose, all you can do is wonder why.

Eisenberg and Stewart have a solid chemistry together as an ambitionless duo—though the nature of their relationship shifts drastically as a result of the various reveals. Topher Grace plays a prat of a CIA desk jockey who ass-kissed his way to a position of authority and wildly oversteps his bounds—his entitled millennial continually justifying this as not-his-fault is fun for a time, but there’s nothing more to him than that. Walton Goggins is completely wasted as a cackling CIA assassin who grates on the nerves—he gets one moment to shine near the end, after another big reveal, but again, it’s a case where a potentially interesting story thread is brought in only to evaporate into thin air.

And that’s really all there is too American Ultra. The script feels like it came from a weed-smoking high school kid who has ideas for a bunch of radical shit he wants to see in a movie, but no clue how to handle characters, pace, or structure, and even less of a grasp on the bigger picture or thematic elements. Every possibly intriguing idea that appears is eschewed in favor of yet another narrow escape and contrived plot device.

There are flashes where the film shines and where you see what could have been. One fight scene in particular will call to mind the hammer fight in Oldboy, or that now-infamous fight in Netflix’s Daredevil, even though it is tonally inconsistent with the rest of the movie. But aside from a few bright spots, American Ultra watches like a collection of scenes strung together because it seemed like it’d be cool. [Grade C-]

Posted by Brent McKnight at 5:14 PM