Tons Of 'Star Wars' News From D23, Including The First Look At The 'Rogue One' Cast 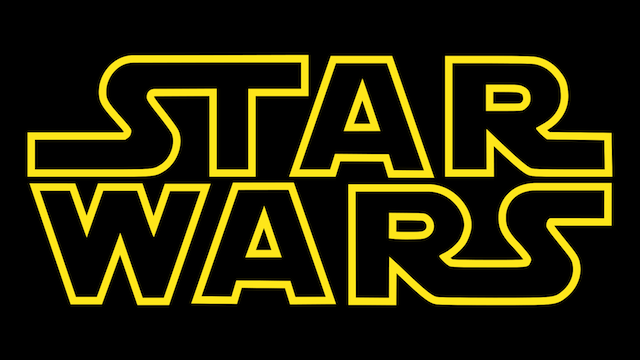 Disney’s D23 Expo is currently going on right now, and while I have almost zero interest in being there in person (crowds stress me the hell out), this year is interesting solely because of Star Wars (I don’t care about being the first to see new Marvel stuff, not even at all). We’ve already heard that there won’t be any new footage from The ForceAwakens, but there are a ton of other things going on in that far, far away galaxy, and Disney and Lucasfilm unveiled some new info about the future of the franchise, and there’s a few badass nuggets to be sure.

Potential SPOILERS beyond this point. Nothing major, but you’ve been warned.

We’ll start out with The Force Awakens. While nothing super new has been revealed, they did unveil a new poster from Drew Struzan, who did those iconic posters for the franchise. Take a look at it for yourself (thanks to Gallery 1988). 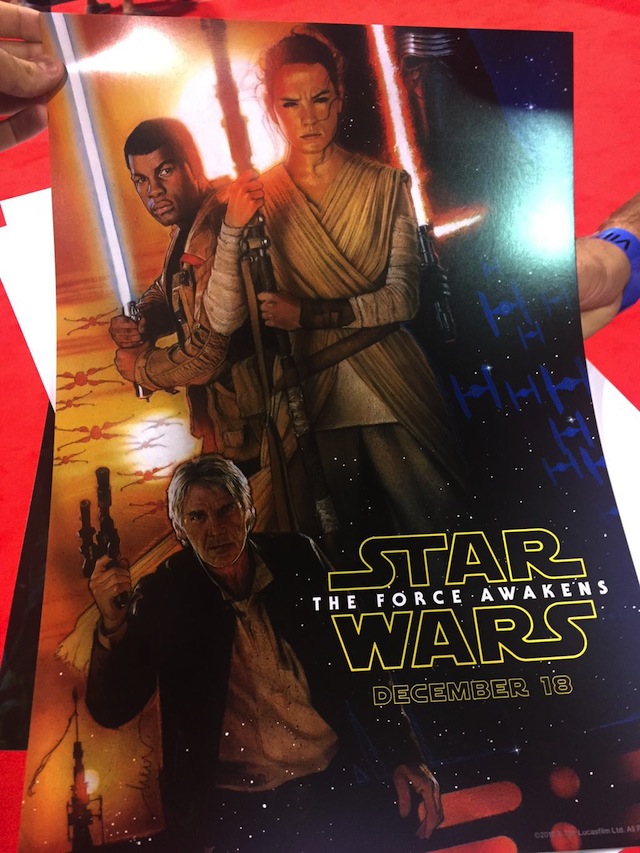 You get a good look at Harrison Ford’s new grizzled Han Solo, as well as Daisy Ridley’s Rey, looking tough as hell. By far the coolest thing about this image is that you see Finn (John Boyega) with what certainly looks like Luke Skywalker’s lost blue lightsaber, the one that he lost with his hand at the end of The Empire Strikes Back, and that has been rumored to be the impetus for this entire film. Not only did it belong to Luke, it belonged to Anakin Skywalker back in the day before he became Darth Vader, providing a nice through line and some connectivity within the franchise.

Next we’ll move on to what we’ve been calling the Anthology films. That’s apparently changed, as they’ll now be known as Star Wars Stories. Check out this image for the upcoming Rogue One with an adjusted logo.

Much more exciting than that name change, however, is that there is now a first official photo of the cast, as well as news about a bunch of new additions to the call sheet, including some total badasses. 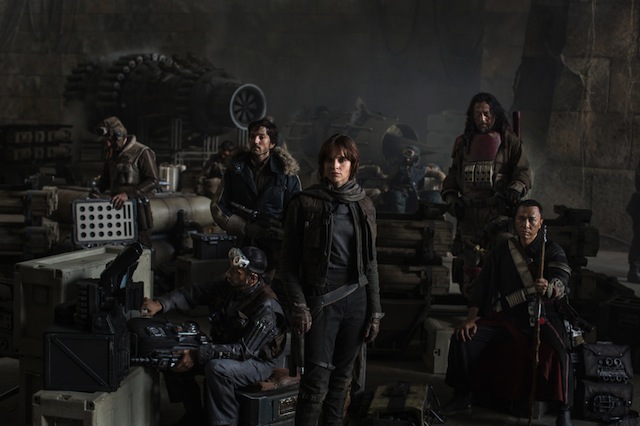 Directed by Gareth Edwards (Godzilla), Rogue One recently began filming—Edwards reportedly recorded a video from set for D23—and this photo shows off stars Felicity Jones, Diego Luna, Riz Ahmed, Jiang Wen, and Donnie Yen. The idea of Donnie Yen in a Star Wars movie is just fucking incredible beyond belief. When I saw this image for the first time, I may have squealed in delight.

I dig the look of these folks. They’re not your typical squeaky-clean heroes, they look more like pirates, mercenaries, and ne’er-do-wells, which makes sense given what we know of the plot. Set between Revenge of the Sith and A New Hope, the action has been described as a heist where the Rebels steal the plans for the first Death Star. If you need to infiltrate an Imperial base and abscond with some pilfered documents, who better to employ than thieves? Jones, Ahmed, and Luna play resistance fighters, leaving the nature of the rest of this motley assortment up in the air, but they look like they’ve seen some shit in their days.

The film has also been described as a war movie—there’s not going to be much focus on the Force in these Story films—and Lucasfilm president Kathleen Kennedy just added:

“Rogue One takes place before the events of Star Wars: A New Hope and will be a departure from the saga films but have elements that are familiar to the Star Wars universe. It goes into new territory, exploring the galactic struggle from a ground-war perspective while maintaining that essential Star Wars feel that fans have come to know. Gareth is such an innovative director and I’m so excited to be working with him and the extraordinary ensemble cast he’s selected for Rogue One.”

Also, not pictured here, are Ben Mendelsohn, rumored to be the main villain (which is the best news ever), and Forest Whitaker, who are both now confirmed for the film. And that’s not all. Hold on to your asses, because they announced that Mads Mikkelsen and Alan Tudyk are both joining the Rogue One party. No word on Mikkelsen’s role, but Tudyk’s character will reportedly be motion capture.

I like the sound of Rogue One more and more as details continue to emerge.

The panel also confirmed that Jurassic World director Colin Trevorrow will direct Star Wars: Episode IX, which was previously reported but is now for reals. 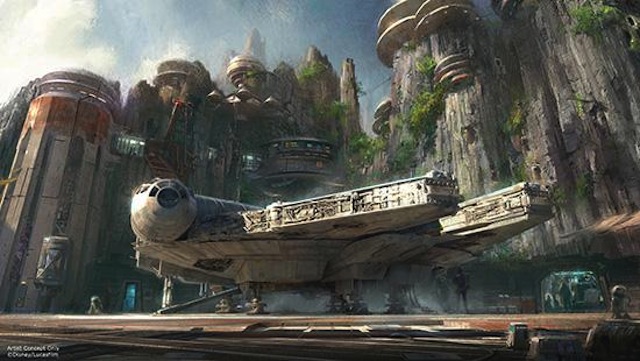 They also revealed details about Star Wars additions to the Disney theme parks. One is going to be at Disneyland in Anaheim, while the other will be at Disney Hollywood Studio in Orlando, and they will be roughly 14 acres. There will be a Cantina, characters from all eras of the saga, and a couple of signature attractions that sound awesome. One lets you pilot the Millennium Falcon, which, if you’re anything like me, you’ve been dreaming about your entire life. The other will let you tool up and fight stormtroopers, which is another item I would like to be able to check off my bucket list. Assuming I ever go to these places, which is rather unlikely, because crowds and leaving the house are stupid, but who knows, I might actually venture out for this.
Posted by Brent McKnight at 1:40 PM