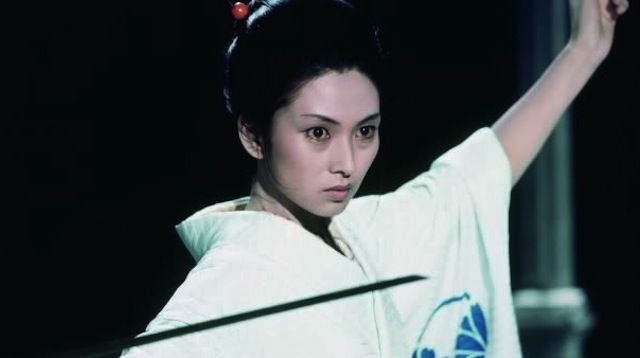 Odds are that if you’re familiar with Lady Snowblood, it’s in reference to Quentin Tarantino’s Kill Bill: Vol. 1. Toshiya Fujita’s 1973 Japanese revenge flick is a huge influence, stylistically and content wise—Tarantino borrows characters, plot points, visual cues, and even the overall structure. If you haven’t watched Lady Snowblood, or the sequel, 1974’s Lady Snowblood 2: Song of Vengeance, now is the perfect time to climb on that train, as Criterion just released a fantastic collection.

Born in prison during a raging snowstorm, Yuki (Meiko Kaji) comes into the world of Meiji era Japan as an asura, with no other purpose than to fulfill her mother’s long-simmering vendetta and exact vengeance against her enemies. Trained from a young age to fulfill this unbreakable vow, Yuki becomes Lady Snowblood, travelling the countryside, searching out and cutting down her targets. Steadfast in her resolve, Yuki still has a compassionate streak, becoming embroiled in the lives of those she encounters along her path of revenge that is not her own.

Told in a series of chapters, Lady Snowblood jumps around in time—we start Yuki’s incarcerated birth, marked from her first moments by karma; jump to her in the midst of her quest, an unexpected assassin wielding a sword hidden in her purple umbrella; we see her train as a small child, an endeavor where her harsh disciplinarian master does things like roll her down a steep hill in a barrel and thrashes her with training swords. Through this strategy, including flashbacks within flashbacks, Fujita gradually peels back layers of the character, doling out information and allowing Yuki to develop and evolve throughout the movie.

Based on the manga written by Kazuo Koike (Lone Wolf and Cub) and illustrated by Kazuo Kanimura, the comic book form infuses the aesthetics of Lady Snowblood. From the framing to the camera angles to the stark color contrasts—you get lots of blood splattering across pristine surfaces, especially snow. These roots are apparent as cinematographer Masaki Tamura lifts visual elements and translates them from the page to the screen. 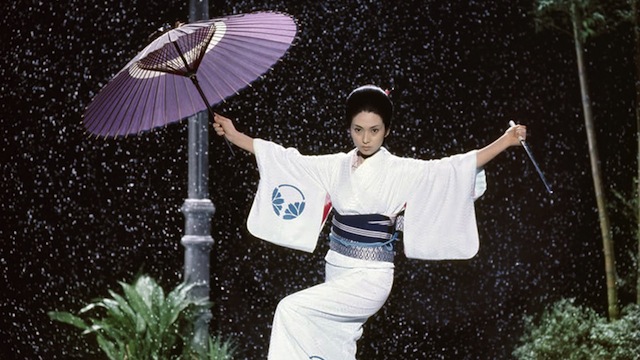 More than just a bloody revenge movie, though it certainly is that, a number of thematic strands and political critiques run beneath pulp surface of Lady Snowblood. You get hints of an anti-militarization stance, corruption among the higher reaches of society, and the common people getting stepped on that belie a larger class-consciousness. Set in the Meiji era, the late 1800s, a time of great transition and change, traditional Japanese values clashed with the increasing influence and incursion of western culture—never is this more apparent than a scene in a masquerade ball where all the attendees wear American style suits and gowns, save Yuki in more customary garb.

Arriving a year later, in 1974, the sequel, Lady Snowblood 2: Love Song of Vengeance, picks up with Yuki more than a decade after she has fulfilled her vicious quest, and she still runs from the consequences. Aimless, burdened by the things she has done, Yuki finds herself enmeshed in the politics of early 20th Century Japan in the wake of the Russo-Japan War.

Kidnapped by the head of the secret police, Yuki is forced to spy on an “anarchist” and retrieve a stolen document that could have disastrous consequences for the government if it falls into the wrong hands. What she sees in the course of her mission, yet another in which she has no choice, causes her to reexamine her allegiances and loyalties.

The modernization of Japan and a corrupt military are, again, primary thematic concerns of Love Song of Vengeance, and social commentary and class elements play key roles in the narrative. There are ideas of oppression, resistance, and class conflict—at one point a slum is burned to the ground in order to “cleanse” it. All of this is woven into a wilder, more fractured story that, while still compelling and weird as hell, borders on schizophrenic and comes across as a bit rushed. 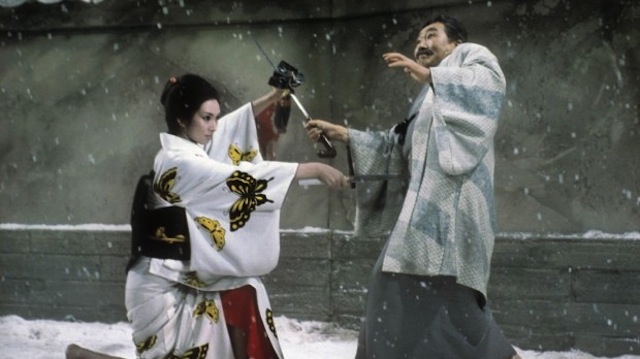 There isn’t a ton of supplementary material to be found on these discs, but since this is Criterion, they’ve put together a nice, thoughtful package that enhances the overall experience. The real reasons to pick this up are the movies themselves, and the new 2K digital restorations give you a crisp, sharp picture that plays up color contrasts and the disparity between light and shadow.

A 10-minute interview with manga writer Kazuo Koike offers insight into the origins Lady Snowblood. While now there are any number of stories about female assassins, in the early 1970s, they were few and far between. He wanted to create a story with a strong, deadly female protagonist that also dug into the historical realities of the time and the inequality between classes in what was becoming an increasingly hierarchal society.

An even longer interview with screenwriter Norio Osada digs into how the movie came together and the particular challenges of adapting a comic into a film. Osada delves into how the various pieces of the production meshed, and sometimes didn’t, his background in Toei yakuza films, and how he brought his own thematic and political concerns into the script, showing how Japan transitioned in the Meiji era, becoming a modern state and discarding many traditional ideas and values.

This wouldn’t be a true Criterion release without some additional reading material, and The Complete Lady Snowblood arrives with an in-depth essay from critic Howard Hampton (Film Comment). He breaks down both movies, examines the themes, puts them in historical context, and generally provides yet another way to look at these works.

Aside from these extras, there are only trailers for both Lady Snowblood and Lady Snowblood: Love Song of Vengeance, but Criterion’s Complete Lady Snowblood is still a package well worth picking up for fans of the films or those of you with a penchant for classic Japanese revenge tales. [Grade: A-]