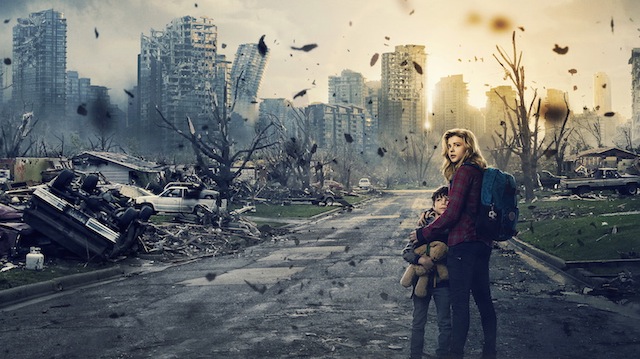 The latest entry into the based-on-a-popular-young-adult-novel, teenage-girl-saves-the-world cinema sweepstakes, The 5th Wave, is a mixed bag. It’s roughly a third of total meh, a third stuff I legit liked, and a third the funniest shit I’ve ever seen. Not in an intentional way.

At it’s best, The 5th Wave watches like a teen version of V, which was a formative science fiction show of my youth, so I can appreciate the hell out of that. But at its worst, this is the same sappy, angst-ridden YA melodrama that makes the Twilight films so unwatchable, complete with a forced love triangle that you just know is going to cause complications down the line. And of course there’s going to be a down the line, as this is the first in a series of three books.

The movie begins with a massive information dump, the kind of thing you can get away with in a novel, but that makes a movie shoot out of the gate like a glacier. Cassie (Chloe Grace Moretz, Kick-Ass, Let Me In), short for Cassiopeia, you know, because space and aliens and junk, is just a normal teenage girl, hanging out at parties, crushing on the dreamy captain of the football team Ben Parish (Nick Robinson, Kings of Summer, Jurassic World). That all changes, however, when the vaguely defined extraterrestrial threat, the Others, show up and unleash a series of destructive waves upon the world. It’s kind of like shaking insects out of a rug—they want to get us the hell off our planet without causing any irreparable damage.

The waves go like this: first up, all the power goes out, no more phones, TVs, planes, communication, cars; second are a series of earthquakes that cause massive tsunamis that wipe out three billion people who live near the oceans—fortunately for Cassie, she’s from Ohio; third comes pestilence, a mutated version of the bird flu that wipes out even more people. Here’s where things get complicated: in the fourth wave the Others start taking over human hosts so no one can tell who is real and who is an alien so they can hunt down the last survivors, which cranks up the paranoia all around.

All of this is essentially prelude and told through narration—not to mention glossed over, leaving huge questions—and the main narrative thrust doesn’t actually kick in until all of this plodding revelation is out of the way. From here there are two threads. So the world is in ruins, Cassie is separated from her younger brother, Sam (Zackary Arthur), her only remaining family, and embarks on a trek to find him. Along the way she encounters hunky farm boy Evan (Alex Roe), and guess what happens? There’s romance. Shocking, I know. 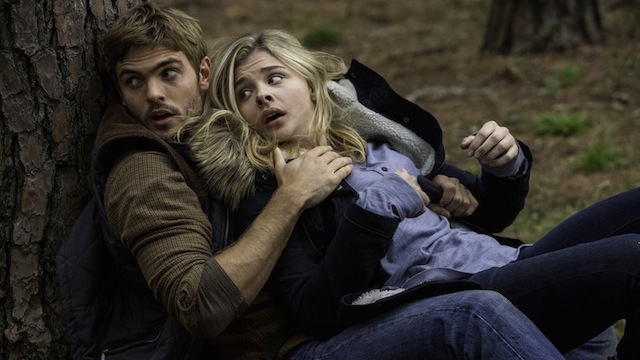 The other thread follows a bunch of young kids that are conscripted into the military, trained to fight the Others and prepare for whatever the 5th Wave has in store. This plays out like a junior Full Metal Jacket, complete with training montages and stirring war movie speechifying. This is also where we happen to find Sam, now called Nugget; hunky Ben Parish, who now goes by the wannabe tough moniker Zombie; and a misfit cast of characters with names like Dumbo, Teacup, and Oompa. The most notable of these new additions is the tough-as-nails Ringer (Maika Monroe, It Follows, The Guest)—you can tell she’s tough because she has dyed black hair and wears heavy eyeliner, even in combat.

The militaristic side of things is where The 5th Wave is most interesting, where the world comes together, and where you and the kids try to figure out what’s going on, not that you couldn’t work that out on your own—everything is broadcast well in advance. There are so, so many twists, it’s like Oprah hollering, “You get a twist, you get a twist, EVERYBODY GETS A TWIIIIISSSSST.”

The blossoming romance between Cassie and Evan, and the connection that later quickly, like instantaneously, sprouts between the protagonist and Zombie, are super cheesy and laughable, but so far gone that they’re unintentionally hilarious. Cassie conveniently keeps a diary of her travels, which comes in handy for exposition. There are attempts to have feminist, female-empowerment undertones, but these attempts are clunky and awkward. Large narrative jumps and questionable decision making leave viewers scratching their head and making faces like a confused dog. But that’s all beside the point, because this is silly and goofy and by the time the final act rolls around, The 5th Wave becomes a laugh riot.

Within the landscape of teenage end of the world dramas, The 5th Wave falls somewhere in the middle quality wise. Not as good as The Hunger Games or The Maze Runner films, it’s a damn sight better than the Divergent fiascos. I can’t help but have hoped for more, however, as it stars three young actors that I like quite a bit, and who have shown to have acting chops for days—Chloe Grace Moretz, Nick Robinson, and Maika Monroe—as well as a supporting cast that includes Live Schreiber, Ron Livingston, and Maria Bello, who has a dandy time playing a vicious military officer.

Unless you’re a huge fan of Rick Yancey’s novel, or you’re just super hard up for some science fiction on the big screen (if that’s the case, you should be checking out The Expanse on Syfy), you don’t need to run out and see The 5th Wave right away. Director J Blakeson (The Disappearance of Alice Creed) has constructed a solid, workmanlike movie, but while there are some good moments, as well as inadvertently hilarious ones, it never rises above a moderate entry into the dystopian teen subgenre. We’ll have to wait and see if this performs well enough at the box office to warrant more installments, or if this will become the latest one-and-done, nonstarter franchise. [Grade: C-]