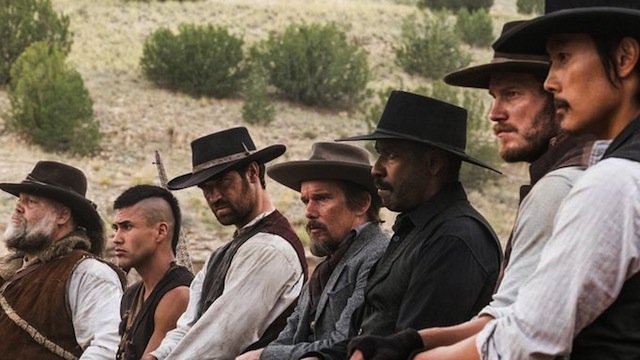 To be honest, until some photos dropped yesterday, I forgot that Antoine Fuqua’s remake of The Magnificent Seven was happening. But if we were sharing the same boat, Sony is doing their level best to remind us both that this is on the way, because they just dropped the very first trailer.

You won’t find anything unexpected in this trailer, but that’s more than okay, because what you expected is totally badass. Fuqua’s last team up with Denzel Washington, The Equalizer, got ho-hum reviews, but I totally dug it, and with Training Day also under their collective belt (The Magnificent Seven also reunites them with Ethan Hawke), I’m game for whatever they want to do. Take a look at the trailer and let me know what you think.

If you’re familiar with John Sturges’ 1960 The Magnificent Seven (and you really should be), itself a remake of Akira Kurosawa’s 1954 classic, Seven Samurai (which you should also be acquainted with), you know the plot. But what the hell, here’s a synopsis anyway. If anything, it just drives home the massive amount of star power Fuqua and company assembled:

Bullets, explosions, Gatling guns, grizzled dudes, actors I quite enjoy, revenge, and it’s a western? The Magnificent Seven will have damn near everything I want in a movie when hits theaters this fall on September 23.
Posted by Brent McKnight at 8:24 PM