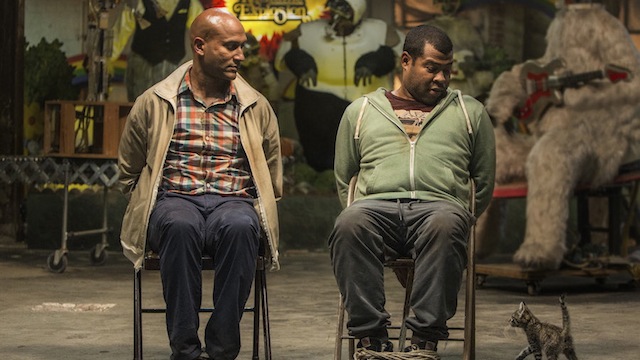 Two of the sharpest current comedic minds, plus an adorable kitten, taking aim at racial stereotypes of masculinity and action movie clichés? You had me at kitten.

With Keanu, Jordan Peele and Keegan-Michael Key, the masterminds behind the popular darling sketch comedy series Key & Peele, front their first big movie. While the result is uneven at times—it too often betrays their sketch roots, playing like a series of bits stitched together—it’s sharp and biting and, most importantly for a comedy, really goddamn funny.

After a beloved kitten, the titular Keanu, is stolen during a break in, two cousins, Rell (Peele) and Clarence (Key), pose as thugs to get the fuzzy little buddy back from a vicious drug dealer named Cheddar (Method Man, who played a character names Cheese in The Wire BTW). From this inherently ridiculous premise, which the script from Peele and Key & Peele writer Alex Rubens makes startlingly relatable and plausible, Keanu rips into media stereotypes of black maleness, every last action movie trope, and the set up is just strange enough to work. It’s somehow totally natural that these two would go through hell for this cuddly little ball of fluff.

Rell and Clarence are not your typical African American movie leads. Rell is an archetype stoner, sitting on his couch, obsessing over movies, wallowing in misery after his girlfriend dumps his aimless ass. It’s Keanu that pulls him out of his funk and gives him a new perspective. Clarence is everything you’d expect from a dude named Clarence. He’s a George Michael-listening nerd who spends so much time doing what he thinks other people want, being what he thinks other people want, that he doesn’t even know who he is anymore.

The bulk of the comedy in Keanu comes from these two fish-out-of-water types trying to infiltrate the Blips, a crew so nasty and mean that they’re made up exclusively of gangsters kicked out of the Bloods and the Crip. They also hang out at a strip club called Hot Party Vixens, I’ll let you take a moment and figure out why that’s funny. 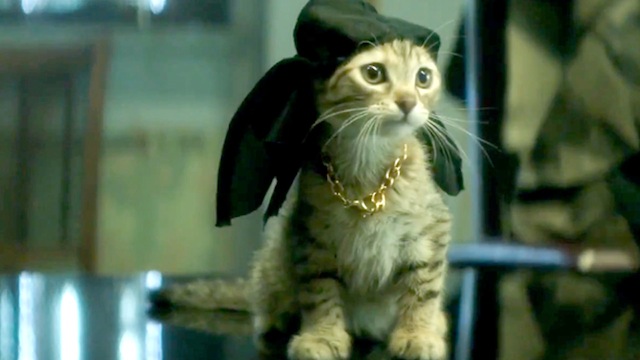 The jokes run the gamut from fluffy, silly spoof gags to razor-sharp satirical barbs. Watching the two comedic masters flip back and forth from mousey, out-of-their-depth squares to hyper-masculine thug caricatures, often in the course of delivering a single line, is the true joy and genius of Keanu. With all the film’s broad silliness, it’s easy to lose sight of just how deft and intricate the lead performances are as Key and Peele move from over-the-top to legitimately terrified to emotional from beat to beat, meshing all of these disparate threads into remarkably accomplished, nuanced, and varied performances.

It doesn’t hurt that they have a cadre of strong supporting players to bounce off of. Tiffany Haddish, Jason Mitchell, and Darrel Britt-Gibson provide texture for the gangster backdrop—watching Clarence give them a street version of a team-building seminar is a scene I could watch all day. Will Forte plays a black culture-obsessed, white-boy weed dealer who lives with his mom, and there are a couple of more-than-noteworthy cameos to be found. However, it is, of course, the kitten that steals the show every chance he gets.

Visually, director Peter Atencio, another Key & Peele vet, gets in on the game. Every last trick from every action flick and gangster movie is present and accounted for, and cleverly turned on its ear with sarcastic intent. From thugged-out slow motion walks to a party-in-the-club scene to an epic mansion shootout and overly acrobatic, holy vengeance-style assassins, it’s all here.

With Key, Peele, Atencio, and Rubens, Keanu is very much in line with Key & Peele, which will please fans. Full of deep-cut, across-the-board pop culture references, and employing their signature style, this is also a double-edged sword. My biggest question going in was whether or not they could fill a full-length feature. While they’re mostly successful, there are times when the formula becomes overly episodic, and where bits and scenes, much like what often happens with individual sketches, play out much longer than they should. From a narrative perspective, this can weigh down the pace. Fortunately, you’re never far from a joke, or Keanu doing something adorable—seriously, kitten in a doo-rag is too damn cute—to right the ship, but tempo and flow are up and down issues throughout.

Is Keanu perfect (it took all my self control not to use purrfect, I’m sorry)? No, it most certainly is not. Is it one of the funniest movies of the year? Oh, hell yes. This is a comedy with tons of rewatch potential and lines that you and your slack-jawed buddies are going to be quoting to each other for years. With a mixture of big, broad gags, and astute, pointed critiques about race, masculinity, and culture, Keanu offers layers to dig into if you so desire, in addition to laugh-out-loud hilarity. Something different from your run-of-the-mill comedies, this will appeal to existing fans of Key & Peele and newbies alike. [Grade: B+]

Posted by Brent McKnight at 5:56 PM