'Deadpool' May Help 'The Goon' Animated Movie Get Made 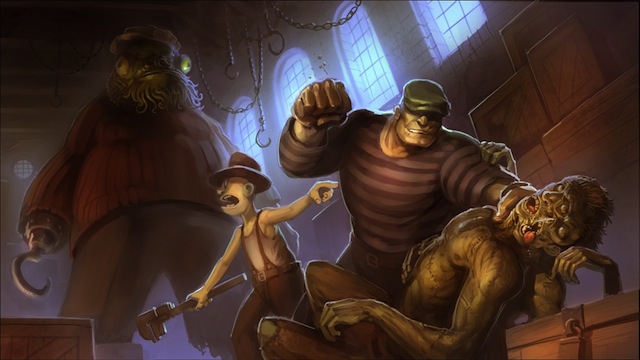 If you’re not familiar with Eric Powell’s The Goon, you should change that immediately. It’s simply one of the best comics of the modern era, a throw-back mash-up of Depression-era pulp stylistics, supernatural horror, and comedy that also manages to tell some of the most emotionally devastating tales while all dressed up gratuitous, over-the-top violence and crude, bawdy humor. An animated movie has been in the works since 1999—there was even a proof of concept video—but there has been little news since back in 2013. Little news, that is, until now.

Back in 1999, David Fincher picked up the rights to The Goon, but one thing lots of people may have forgotten, or not realized at all, is that Deadpool helmer Tim Miller is currently one of the co-directors (along with Jeff Fowler). With the violence, swearing, and general mayhem, The Goon is a tough sell as a more adult-oriented animated movie. But thanks in part to the massive success of Deadpool, the project may have been able to build up some momentum. Talking to Collider, Miller said:

If Deadpool shined any light in the direction of the studio, we wanna use some of that light to shine it on Goon. So we’ve been doing a lot of work lately, we did some voiceover last week I do think that there is a corollary. Deadpool proves it, in a big way, that there is a market for this stuff out there… Goon has a lot of heart, it’s got a lot of comedy, it’s got a lot of similarities to what I think was successful in Deadpool, and so I think it’s not a stretch to compare those two things and say the world is a little more ready than they used to be for this kind of material. In the past, there’s reasons why The Goon wasn’t made, it’s because people were afraid of edgy animation. Now I think that Deadpool has proved that that audience is out there in a bigger way than some people thought.

So just because there hasn’t been any movement on The Goon in years doesn’t mean it’s dead. In fact, it sounds like it’s currently as alive as it’s ever been, which is the best goddamn news I can imagine. Miller is one of the ones who was the driving force behind Deadpool, refusing to let that die, and though it took years, the result was well worth the wait and the blood, sweat, and tears. Hopefully The Goon will follow the same path.

The Goon revolves around the adventures of the titular character and his hyper-spastic sidekick Frankie. The Goon is an orphan, raised in a carnival, who made his way to top of the organized crime racket with his penchant and skill for violence. He’s also a damaged, wounded, tragic figure, and a kind of Robin Hood in downtrodden times. Frankie is Goon’s lifelong best pal, a short-fused, unpredictable loudmouth. Together they battle zombie and hobos and hags and bog lurks and communists and an evil preacher, among many other nasty beasties.

The Goon is to star the voices of Clancy “The Kurgan” Brown and Paul Giamatti as the Goon and Frankie, respectively. But Miller also said they’re going to do some voice work soon with a “very prominent movie star.”

This is all very exciting news. While we don’t know when we’ll see The Goon, I’ve already been waiting for years for this, so a few more isn’t going to kill me. Hell, I’m just psyched that this is moving forward at all. Check out The Goon teaser below.