'Alien: Covenant' Cast Photo: Meet The Delicious People The Xenomorphs Get To Devour 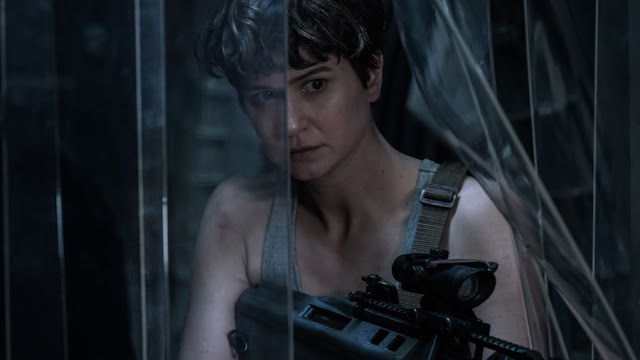 Oh man, I sure hope the Xenomorphs in Ridley Scott’s upcoming Alien: Covenant are super hungry. The production just released a photo of the whole case and it certainly looks like a smorgasbord—we’re talking a Vegas-style, heartburn-inducing buffet of epic proportions. Check it out after the jump. 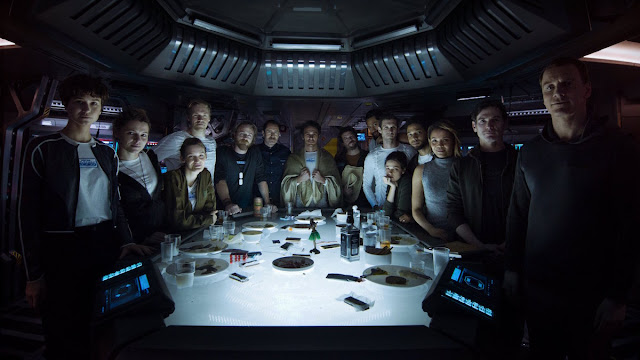 It’s not exactly a secret that James Franco has a bit of a messiah complex, which is abundantly clear as he takes the Jesus position of this “Last Super”-style image. If, you know, instead of apostles, “The Last Super” was populated about to be devoured by armor-plated alien killing machines. This is obviously staged, so I wonder if that has any relevance to movie?

In addition to James Franco—who joined the production late in the game—in the middle, we’ve got the purported leads bookending this cabal of ill-fated space explorers. Katherine Waterston plays Daniels, a hard-ass member of the crew, while Michael Fassbender reprises his role as David, the synthetic who is one of two survivors to blast off at the end of Prometheus. He also reportedly does double duty and plays Walter, a newer model, one who we’ve heard has a bit of a superiority complex.

Rounding out the image is a strong collection of character actors/Xenomorph fodder. The role sheet for Alien: Covenant includes Demian Bichir, Amy Seimetz, Billy Crudup, Carmen Ejogo, Callie Hernandez, Jussie Smollett, Alexander England, Nathaniel Dean, Benjamin Rigby, and Danny McBride, doing something far beyond his usual wheelhouse. I’m sure he’ll have plenty of chances to crack wise and make crude jokes, but this is still quite different from his norm.

Two notable cast members are not pictured. Noomi Rapace, who, after reports to the contrary, will apparently show up as Dr. Elizabeth Shaw, the only Prometheus survivor besides David. Since Alien: Covenant supposedly takes place ten years after that movie, on the surface of a harsh, distant planet, my guess is that she’s long dead and we’ll see her either in flashbacks or archival footage.

The same goes for Guy Pearce’s Peter Weyland. Since he’s dead and all, I suspect he’ll also show up in some bit of footage the crew stumbles upon, though whether it’s old Peter Weyland or young Peter Weyland remains to be seen.

Here’s the synopsis for Alien: Covenant:

Though Alien: Covenant is a sequel to Prometheus, the connection to the larger Alien universe is much more explicit this time around. Ridley Scott has said this string of films, however many there winds up being, leads directly to the events of his 1979 classic. Many have theorized that Katherine Waterston’s character is related to Sigourney Weaver’s Ripley, but we’ll have to wait and see how it all shakes out.

For the moment this will have to tide us over, but only for a moment. Tomorrow, February 22, there will be an Alien: Covenant preview during Legion on FX. So you have a reason to tune in, though you should be watching already, the show is goddamn fantastic.

Alien: Covenant bursts into theaters on May 19. If you haven’t, check out the brutal first teaser trailer below, complete with bloody alien shower sex.

Posted by Brent McKnight at 9:09 AM